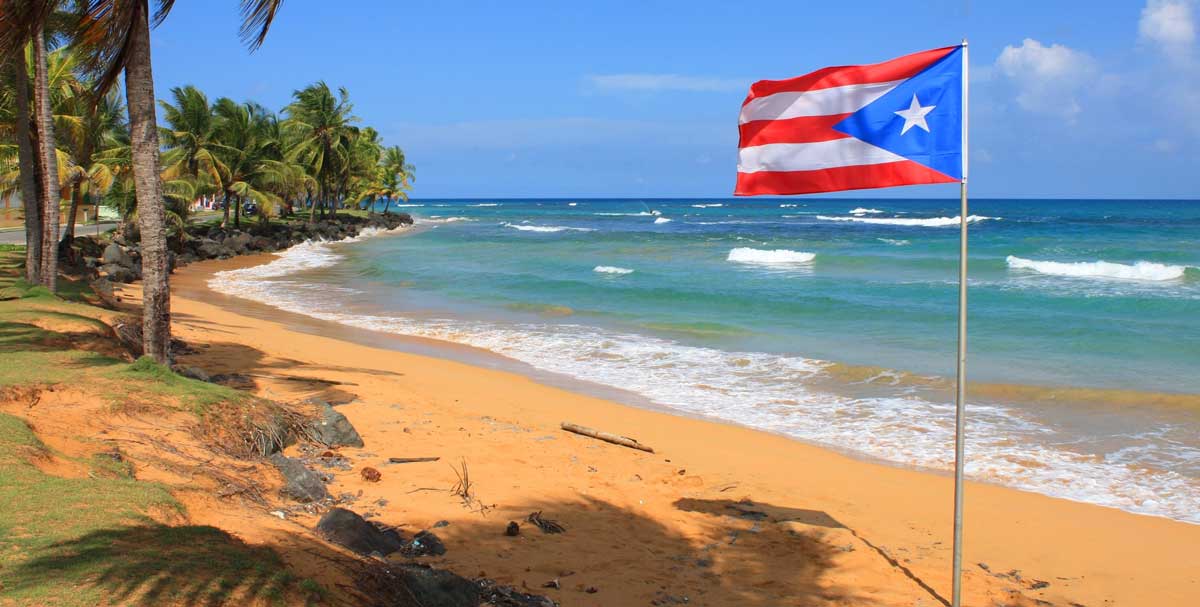 When in Puerto Rico, you’ll come across the Puerto Rico flag everywhere you go.

The flag of Puerto Rico is a strong cultural symbol and is so popular that you’ll inevitably see it as you visit the popular spots in Puerto Rico.

As a Puerto Rican myself, there is nothing that makes me prouder than my flag and its amazing history of resistance and revolution. Whether you find the Puerto Rico flag on a mural, on the beach, or on a rock, here’s what you need to know about it.

Puerto Rico’s flag features a navy blue triangle on the left side with a single white star. It also has five horizontal stripes, three red and two white alternated.

The current official meaning behind the Puerto Rican flag is the following: the triangle symbolizes the government’s three branches: the executive, legislative and judicial branches.

The single star represents the Commonwealth of Puerto Rico. The red stripes symbolize the blood that nourishes the three government branches, and the white stripes stand for the liberty and rights of individuals.

The present-day meaning came to be in 1952. This change imposed by the government distanced the flag of Puerto Rico from its revolutionary symbolism and history.

In the original flag’s design, the white star represents the island and the blue represents the sea and the sky. The red stripes represent the spilled blood of the patriots fighting during the revolution. The white stripes symbolize victory and peace after obtaining independence.

In the original design, the color of the triangle was celestial blue. The color changed to a dark blue (similar to the American flag) after Puerto Rico became a Commonwealth of the United States.

The first Puerto Rican flag was created by the pro-independence political group known as the Revolutionary Committee of Puerto Rico. The rebel group had the goal to reach independence from Spain and declare a Republican government.

In 1868, the group leader Dr. Emeterio Betances asked Mariana Bracceti to sew The Revolutionary Flag inspired by the Dominican Republic Flag. During this time, the group believed in an Antillean Confederation with other Caribbean islands. The flag had a white cross, a white lone star, and two blue and red corners.

On the revolt of September 23, 1868, rebels took over the catholic church of the town of Lares. Placing the Revolutionary Flag on the altar, they proclaimed the start of the Republic of Puerto Rico with Francisco Ramírez Medina as the president. Although the revolution wasn’t successful, revolutionaries continued using the flag to advocate for independence. [Source]

In 1895, the Puerto Rico Revolutionary Committee called “Club Borinquen” composed of revolutionary Puerto Rican exiles in New York adopted a new flag. It had the same design as the Cuban flag, but with the colors inverted. This showed the political affiliation between both countries’ revolutionaries.  [Source]

In 1952, the government officially adopted the Puerto Rican National Flag as the official flag with changes in its meaning and colors to distance it from its revolutionary origins.

Up to 1952, Puerto Rico didn’t have an official flag. After Cristopher Columbus colonized Puerto Rico, then called San Juan Bautista, the island used the Spanish government flag. After the Spanish American War, the only flag permitted was the United States Flag.

In 1952,  the government officially adopted the current flag of Puerto Rico, and theoretically speaking, it is the only one Puerto Rico ever had of its own.

A Painter is Painting One Flag Per Municipality

Hector Collazo is a Puerto Rican artist that created the project 78 Pueblos: 1 Bandera, intending to paint the flag of Puerto Rico in every single one of the municipalities. Up to this date, Hector has painted 75 flags. [Source]

There is Black Puerto Rican Flag

Puerto Rico’s flag is a symbol of revolution and defiance, which is why during its history it changed to represent different battles and causes. The most popular altered Puerto Rico flag is the black flag. The black Puerto Rico flag was born during the protests against the PROMESA law that established a Financial Oversight and Management Board for Puerto Rico imposed by the United States. [Source]

Artists painted the first black flag in Old San Juan which is of the most popular things to do while visiting San Juan.

There are Two Different Versions of The Flag

Now, it represents the government branches and the commonwealth status, distanced from the original meaning. Still, both flags are frequently used around the island.

The Spanish Military Had Its Own Flag

During the Spanish dominion of Puerto Rico, the Spanish flag was the main representation of the empire. But, you could also find the Cross of Burgundy Flag wherever there was a Spanish military base.

The Flag Has Its Own Celebration

The 22nd of December is the day of La Bandera de Puerto Rico or the day of the Flag of Puerto Rico. The celebration is the anniversary of the day in 1895 that a group of 59 Puerto Ricans (led by Jose Julio Henna) got together in the Chimney Corner Hall  in New York and raised the Puerto Rican flag for the first time.

This is only one of the many Puerto Rican festivities with cultural and historical meaning.

The Origin of the Flag is Unknown

It’s believed the flag was designed by Francisco Gonzalo Marín.  A letter from Juan de Mata Terreforte, vice-president of the Puerto Rican Revolutionary Committee in New York City, points to Marín as the designer.

But, other sources state Antonio Velez Alvarado created a prototype of the flag first, and José Martí, a Cuban journalist and poet, wrote about it in the newspaper Patria. [Source]

A Commonwealth With its Flag

Although Puerto Rico is a Commonwealth of the United States, the country participates in many sports events, festivals, and international events using its name and Puerto Rican flag.

Besides the country itself, for locals, the flag of Puerto Rico represents Puerto Rican culture.

Find the Flag on the Beaches

One of the most unique places to find the flag of Puerto Rico is on the beach. The flag is often displayed on a pole over a rock formation either on the sand or the water.

Arecibo, Domes Beach, and Survival Beach are some of the popular beaches in Puerto Rico where you can find it. You can also find it painted in buildings or rocks by the coast.

The First Puerto Rico Flag is a Town’s Flag

The first unofficial Puerto Rico flag was crafted by the Revolutionary Committee of Puerto Rico and used during “El Grito de Lares”, a rebellion in 1868 against the Spanish Government. While the revolution failed, the flag now identifies the town of Lares.

The flag also keeps its original meaning, with the red representing the blood spilled by the brave warriors of the rebellion, and the white start combined with the blue standing for freedom.

Why do Cuba and Puerto Rico have the same flag?

Why does Puerto Rico have two flags?

Travelers will notice two Puerto Rico flags with different tones of blue on the triangle. The most modern version of the Puerto Rico flag has a navy blue triangle, and it was changed after Puerto Rico became a Commonwealth of the United States. But, the original color of the triangle in the flag is celestial/sky blue. Visitors can see both colors in flags when visiting the island.

The current Puerto Rico flag was created in the 19th century by the Puerto Rican section of the Cuban Revolutionary Party in New York. The flag had the same design as the Cuban flag with inverted colors. At the time both Puerto Rico and Cuba shared political ideals and advocated independence from the Spanish Empire.

What does the Puerto Rican flag symbolize?

The star in the original Puerto Rican flag symbolizes the island. The triangle’s color represents the sky and the sea that surround the island.

The white stripes represent the victory and peace after obtaining independence, and the red one represents the blood spilled by revolutionaries. Although the meaning of the flag was officially changed by the government in 1952, many Puerto Ricans stand by the original meaning.

Now that you know the importance of the Puerto Rico flag for Puerto Ricans! Before you go, check out these amazing things to do in Puerto Rico, including some perfect spots to take a picture with the flag of Puerto Rico.