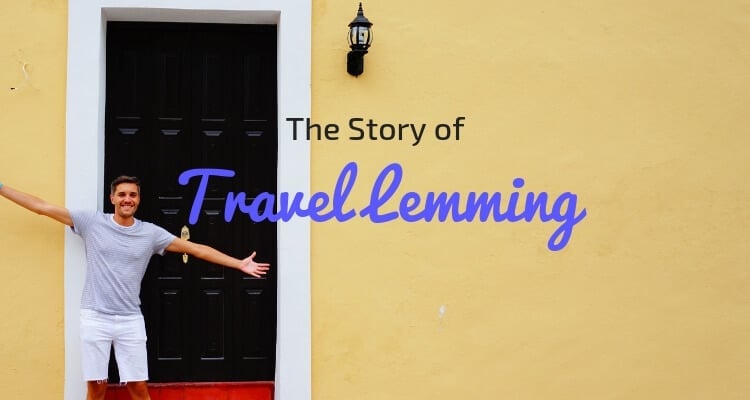 My friend calls these sort of people “soul flashers.”

Well, to turn a phrase from Selena Gomez, “that ain’t me.”

I can be a pretty private person.

I love writing useful content that helps you, the reader, travel better. I prefer to write things like my Ultimate Guide to Valladolid. I figure those are things that people can actually use. And, conveniently, they don’t really require me to tell you anything at all about me 🙂

But that approach has also meant that many of my readers don’t really know me at all. And the few times I have written “personal” articles, like my screed about 43 Things You Learn From Travel, they’ve actually turned out to be among my more popular articles.

So, in an effort to change that, and to connect with you a bit more, I’ve written up a brief history of my life and how I got started travel blogging.

Growing Up a Military “Brat”

People often ask how I came to love travel so much. I think a lot of it has to do with the fact that I was the child of service-members (my father was in the U.S. Navy, my stepfather in the Air Force).

When you grow up as a military brat, you move around.

In fact, so much that I sometimes have difficulty answering the most common question you get when you meet people while traveling:

“Where are you from?”

Well, for me it’s a bit complicated.

I claim Denver, Colorado as home because all my family is from there and I’ve spent more time in Colorado than anywhere else in the world.

But I was technically born in Orlando, Florida while my father was stationed there. I graduated from high school in a small football-obsessed south Texas town (think Friday Night Lights … and yes I briefly played). I went to college in Philadelphia and law school in Connecticut.

And I’ve lived for at least a brief period in Maine, Michigan, New York, D.C., Maryland, Virginia, California, and Delaware.

My three years in Misawa, Japan during middle school were probably some of the most formative of my life.

Experiencing another culture at an early age caused me to think more broadly about the world. It’s probably a major reason that I went from growing up in a conservative, high-religious family — my mother is Catholic, my father Mormon — to later pouring my heart into multiple political campaigns for progressive Democrats.

And, more than anything, living abroad as a child caused me to fall in love with travel.

Throwing Away 7 Years of Higher Education

As a child, I was always a bit of a nerd. No one in my immediate family had graduated university, and so I wanted nothing more than to get into the very best school that I could.

The school I wanted to go to most of all was Yale.

But I got rejected.

So I went to UPenn instead. I spent four years busting my butt at school and volunteering the rest of my time on political campaigns.

And then, in what felt like poetic justice at the time, I found myself being recruited by Yale for law school.

I didn’t really have a good reason for going to law school, other than that it seemed like the thing to do at the time. Plus, it was a good school, so I figured “why not.”

And I came from a large and financially challenged background (considering they risk life and limb for our country, service-members are woefully under-compensated).

So I paid for it the only way possible:

A TON of student loans.

By the time I graduated law school, I was roughly a quarter million dollars in debt.

My monthly debt payments were more than many jobs pay in total.

And, so I did the only thing I could think of: I went to work for a high-paying corporate legal job.

I put on a suit, got an office, and spent the next five years working as a trial lawyer representing large corporations in multi-million dollar lawsuits. You know, kinda like the show “Suits,” except not nearly as interesting.

And it turned out I was kinda good at it. And I kinda liked it.

For a long time I thought maybe I had found my calling. That maybe I could spend my life doing this.

But, as much as I enjoyed the work, even the sweetest drink is pretty terrible when you are drinking from a fire hose.

100 hour weeks at the office weren’t unheard of during trial time.

And, before I knew it, it seemed like it was always trial time.

In the midst of this chaos, travel became my escape.

One great thing about trial work is that as soon as the trial is over, there’s a short precious respite before the next case comes in.

And I took full advantage of those periods to steal away for a week to Nicaragua, Budapest, Bali, Costa Rica, Mexico, or wherever I could find a flight.

But those short tastes of freedom weren’t quite enough.

And my hair was turning gray from the stress.

So I left my job.

… And Leaving it All Behind

When you hear stories about people quitting their jobs to travel the world, you imagine that scene from Office Space where Jennifer Aniston flips off her boss and storms out of the restaurant.

Well, that’s not really my story.

I rather liked the people I worked with and I even liked the work (there was just too much of it).

And I didn’t actually quit to travel the world at all:

I quit to run a congressional campaign for a close friend across the country.

But the thing about campaigns is that they end nearly as quickly as they began, so before I knew it I was out of work.

And that’s when I decided to travel for awhile.

So rather than immediately go back to my old job, or apply for a new one, I bought a one way ticket to Mexico City …

The following year was easily the greatest of my life, and only hope I can top it one day.

I mean, just check out all the awesome places I went in a short time span:

I left to travel with no firm plan about where I would go, how long I would travel, or what I would do afterwards.

I had saved up enough money to afford the budget travel style I’d come to enjoy. And I had gotten pretty good at figuring out how to travel cheaply.

Over that year I visited a whopping 43 countries across 6 continents.

Which, as I’ve since been told, is a little crazy.

A lot of people who go on a long trip like that tend to focus on a particular region, or a more narrow list of countries.

But I honestly thought it was going to be a “once in a lifetime” experience, and I wanted to sample as much of the world as I could during that time.

So I tried to check off as many boxes from my bucket list as I could.

I went on safari in Kenya. I participated in the world’s largest water fight in Thailand. I went road-trippin’ in Tasmania and through the salt flats of Bolivia (where I got trapped by protesters). I saw the Great Pyramids, the Eiffel Tower, Machu Picchu, the Taj Mahal, and so so so many other wonderful things.

I made some incredible friends and I learned a ton of valuable life lessons.

The many great experiences I had were, in a world, awesome.

Just check out this little photo diary of my trip if you want a small taste of what I experienced.

The Birth of Travel Lemming

Oh, right, this is supposed to be an article about how I started this blog.

Well, the truth is that it just sorta happened.

I never intended to blog when I left for my trip.

But I did post a lot of photos on social media, and I was going to so many awesome places. So I kept hearing the same piece of feedback: “you should start a travel blog.”

I resisted for a while.

There’s a ton of travel blogs out there, I figured, and the world doesn’t need another one. Plus, it might kinda ruin travel to have it also be my work right?

But about halfway through my trip I relented.

So in April of 2017, I bought a WordPress theme, a travel blogging course, and decided to start this travel blog.

Why did I choose the name “Travel Lemming”?

Well, I wanted this blog to focus on emerging and off-track travel destinations since those are the sort of places I most enjoy traveling.

And lemmings are little animals that are rumored to follow each other in groups, even to the point of running of cliffs to their deaths together (they don’t actually do that, but that’s the myth).

So the name “Travel Lemming” is a bit of a play on the phrase “don’t be a lemming” – meaning to chart your own course.

Anyway, to my surprise the blog kinda took off a bit more than I anticipated.

I’ve been quoted in media ranging from US News to Fodor’s to The New York Times (even if the last one did misspell my name, and never mentioned the blog).

And, more importantly, I’ve been lucky to have tens of thousands of people follow me on social media and hundreds of thousands visit the blog in the past year and change.

I get emails every day from folks who are asking for advice on their trips, how to travel cheaply, how to start a blog, etc.

And it feels great to get comments like this from travelers that I helped out (this one on my Denver Travel Guide):

Blogging is never going to make me rich, and that’s totally ok for me.

I love it nonetheless.

What’s Next for Travel Lemming?

Curious about what happened to me after I returned from my grand trip? And where I’m headed to next?