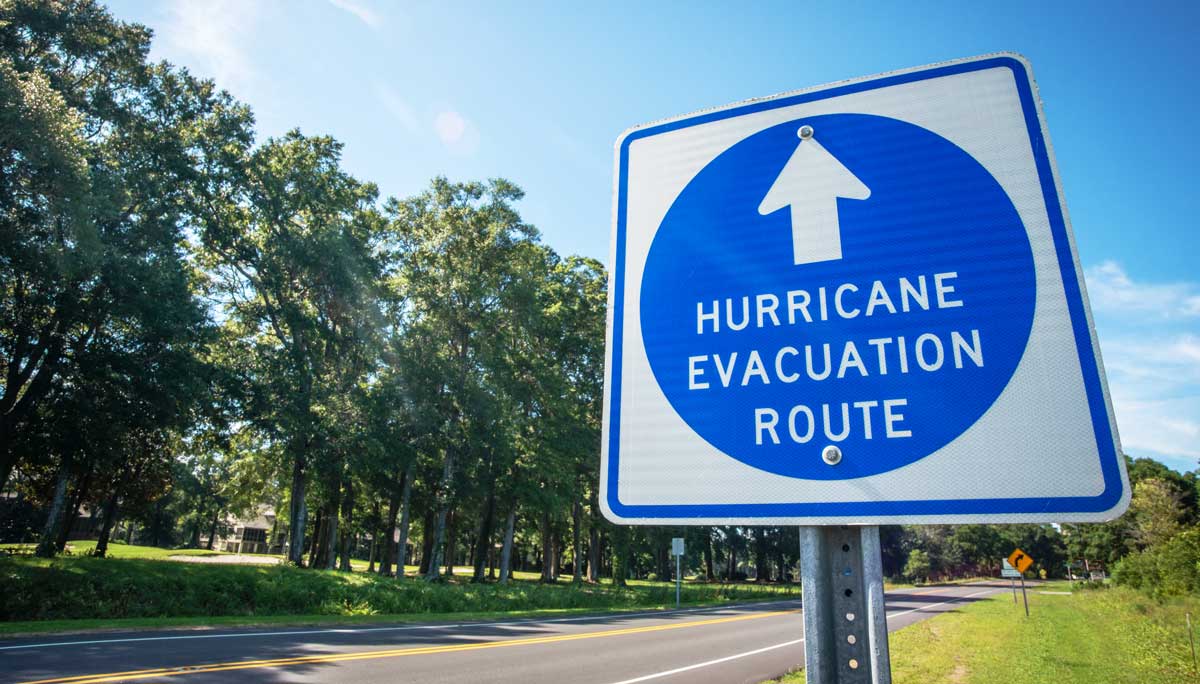 If you’re worried about traveling during the hurricane season to Puerto Rico, you’re not alone.

Every year tourism drops from late July to November because visitors are afraid of traveling. But worry not!

I’m a Puerto Rico local who has lived through many storms and hurricanes myself, and I’m here to tell you all about the hurricane season in Puerto Rico, why the island is still a great destination during it, and useful tips for making the most of your visit.

🌀 Do You Want to Help? Hurricane Fiona made landfall in Puerto Rico September 18, 2022. The floods left hundreds of people homeless, without power nor potable water. If you wish to help, check out this list of non-governmental organizations aiding the victims. Feel free to reach out with any questions.

When is Hurricane Season in Puerto Rico?

The official hurricane season in Puerto Rico goes from June 1st to November 30 every year, with September as the peak of the season and the month with more cyclone activity. Although the season occurs every year, not every year Puerto Rico suffers the direct impact of a cyclone.

🌡️  Average Temperatures –  Great weather all year round, with an average temperature of 80°F, colder in the winter months and hotter in the summer.

Be sure to read my guide to when to visit Puerto for more information on weather, crowds, and the best months for visiting.

The rainy season in Puerto Rico goes from April to November with the rainiest months being April, August, and November generally. June and July are months with less rain and more heat.

Many visitors associate the wet season in Puerto Rico with hurricanes, but other disturbances might cause heavy rainfall all year round:

🌤️ Local Effects – The mix of humidity and warm temperatures from a day creates light showers in the afternoon.

🗺️ Location – Because of Puerto Rico’s topography, it rains more in certain areas like El Yunque.

🌧️ Fronts – Changes between air masses that can cause rain, thunderstorms, and winds.

🌧️Tropical Wave – Also called an easterly wave, a disorganized group of clouds that forms due to low pressure.

📚 Bookmark for Later: My guide to What to do in Puerto Rico.

Every year low-pressure disturbances form in East Africa and move through the tropics until reaching the Atlantic Ocean, where they find the right atmospheric conditions to grow into a stronger storm with powerful winds.

When winds get organized and start rotating over 74 mph, that storm is officially a hurricane. Puerto Rico just happens to be in a susceptible position.

If you’re wondering how hurricane season is during a particular month, it’s helpful to look back on historical data about which hurricanes have hit Puerto Rico in which months:

By July, named cyclones continue to form both in the Gulf of Mexico and the Atlantic Ocean.

🌩️Tropical Storm San Cirilo, 1901 – this was the first storm to hit Puerto Rico in the XX century.

The number of active systems grows significantly in the Atlantic Ocean, especially during the second half of the month. During August, Puerto Rico experienced both tropical storms and hurricanes.

September is the peak of the hurricane season in the Atlantic Ocean as there isn’t enough shear to keep systems from organizing. This was always the most active month during the country’s hurricane history, with Hurricane Maria as the last major hurricane that made landfall.

🌩️ Hurricane Fiona, 2022 – category 1, made landfall in Cabo Rojo, left millions in economic damage and hundreds of people homeless due to the floodings. Some areas and cities  received up to 22 inches of rain in a few hours. The complete island lost power.

🌩️ Hurricane Irma, 2017 – category 5, this major hurricane affected Vieques, Culebra, and the north of the main island through exterior rainbands.

🌩️ Hurricane George, 1998 – category 4, one of the most destructive in the island’s history, with a loss of $3 billion.

🌩️ Hurricane Hortense, 1996 – the eye crossed the west coast in just 1 hour and 15 minutes, and although it was category 1, the rainfall caused floods and loss of $150 million.

🌩️ Hurricane Hugo, 1989 – category 4, caused 8 deaths and $2 billion in loss. It made landfall in Vieques and later on the main island through Fajardo.

🌩️ Tropical Storm Frederick, 1979 – made an indirect impact with $5 million in damages by floods.

🌩️ Hurricane San Nicolás, 1931 – category 1, crossed the north coast, but the damage was mostly around the San Juan area.

During the second half of October, the number of tropical storms and hurricanes starts to diminish. During this month, Puerto Rico received the impact of:

November is the last month of the season. Historically, not a single cyclone made landfall and direct impact on the island. Hurricane Lenny was close and it’s also remembered for its particular way of moving towards the east.

December and January are relatively safe from hurricanes as the season ends in November, but some off-season storms and hurricanes formed during these months.

👉 Read Next: My complete guide to the best season to travel to Puerto Rico

Is it Safe to Go to Puerto Rico During Hurricane Season?

Visiting Puerto Rico during the hurricane season is generally safe as hurricanes don’t affect the island directly every year. Although there isn’t a way to avoid hurricanes or predict them with months of anticipation, travelers can know about a possible impact with 5-6 days of anticipation, enough time to make any changes to their trip or take any precautions.

If you’re visiting Puerto Rico during the hurricane season, you should get travel insurance in case you need to make any last-minute changes to your trip. World Nomads travel insurance covers your pre-cancellation, your additional accommodation, and medical expenses in case of a hurricane.

📚 Related Reading: Is it safe to travel to Puerto Rico right now?

Tips for Visiting During Hurricane Season

There isn’t a way to predict if there is going to be a hurricane with months of anticipation, but if your trip to Puerto Rico is less than two weeks away, you can monitor the National Hurricane Center website and the National Weather Service to know of any possible weather threat.

If you’re traveling during the hurricane season, opt for booking your accommodation in a hotel with free cancellation. If you have to change plans at the last minute, you won’t lose your money or pay any penalty fees. With Booking.com, you can use the website’s filters to find great hotels with free cancellation in the best neighborhoods of Puerto Rico.

Travel During the Summer

Even if summer is the start of the wet season, it doesn’t mean you’ll face bad weather constantly. June and July are the driest months of the wet season. Summer is also the high season for locals that love to enjoy some beach time since the tides on the best beaches are calmer.

👉 Want to know more? Read more in my local guide about the best season to travel.

👉Local Tip: Plan your trip for the summer, late October or November, to enjoy the prices of the low season without the high risk. Use Booking.com to find free cancellation hotels with great prices per night.

If you still want to book a trip to Puerto Rico during the peak of the hurricane season, make sure to get travel insurance that covers you in case there is a sudden change of plans. World Nomads insurance covers pre-travel cancellations, additional accommodation costs, and medical expenses in case of a tropical storm or hurricane.

During storms and hurricanes, it’s quite common for blackouts to occur in Puerto Rico, which also means the ATM system fails to work. If you’re on the island during a hurricane, withdraw cash from your card and keep it with you for when you need it.

If you’re staying on the island while there is an atmospheric event, make sure to know the local emergency numbers like 911 for emergencies, the local police, and the firefighters’ number.

Keep Away from Rivers and Beaches

When storms are passing through Puerto Rico, make sure to avoid visiting rivers and beaches, as there can be floods, storm surges, and riptides. Most of the casualties during storms are due to floods.

👉 Read Next: My complete guide to the best season to travel to Puerto Rico.

How many times has Puerto Rico been hit by hurricanes?

Between 1867 and 2022, Puerto Rico received the direct impact of 30 hurricanes, including 9 major hurricanes above category 3.

When was the last hurricane in Puerto Rico?

The last hurricane to landfall in Puerto Rico was Hurricane Fiona on September 18, 2022, flooding multiple cities with up to 22 inches of rainfall and making the complete island lose power.

What part of Puerto Rico is safest from hurricanes?

For the small size of Puerto Rico, hurricanes affect the entire island, regardless of the hurricane category. If a hurricane passes far to the north or the south, the outer rainbands might affect only one part of the island, and depending on the route, the west coast might be the safest.

What is the rainiest month in Puerto Rico?

What was the worst hurricane in Puerto Rico?

Regardless of when you decide to visit, Puerto Rico offers a great vacation even during the hurricane season!

👉 Before you go, don’t miss my guide to the best Puerto Rico attractions – including some seriously fun ones!