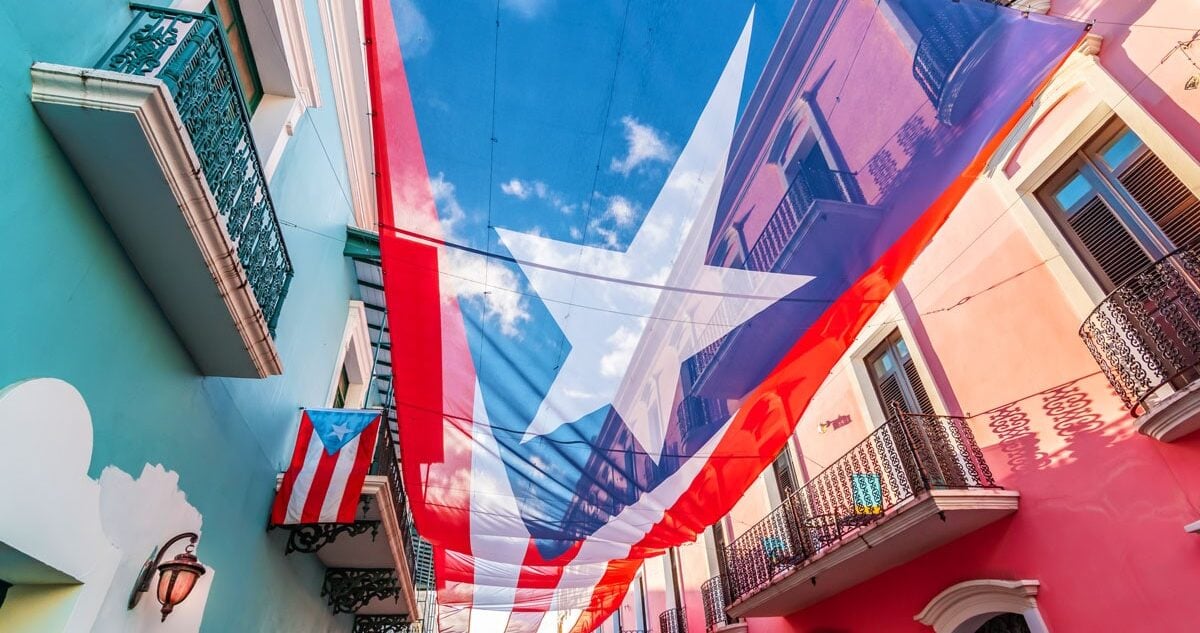 Puerto Rico is a Caribbean paradise that attracts visitors from all around the world.

Although you might’ve heard about its beaches, or its tropical rainforest (the only one in the USA), there is a lot more to Puerto Rico than meets the eye!

As a Puerto Rico local, I am proud to share these 41 facts you should know about Puerto Rico.

Disclosure: Travel Lemming is an independent reader-supported blog. You can support my work by purchasing through the affiliate links on this page, which may earn a commission for this site. Thank you!

Puerto Rico is an archipelago that consists of a main island surrounded by smaller islands and cays. Vieques and Culebra count as cities of Puerto Rico. Other smaller islands like Mona Island, Gilligan’s Island, Isla Palomino, and Caja de Muertos are reserves used for investigation and leisure.

📚 Related Reading: Top Things to Do in Puerto Rico

2. Puerto Rico is a Territory

3. Puerto Ricans Have the US Citizenship

With the Jones-Shafroth Act created in 1917,  Puerto Ricans received United States citizenship for the first time since the arrival of the United States after winning the Spanish American war.

Puerto Ricans are US citizens and, yet, they can’t vote in the US Presidential General Election or the US Congress unless they’ve moved permanently to the United States.

5. Puerto Ricans Have their Own Citizenship

6. Puerto Rico is Still a Colony

Ever since Christopher Columbus arrived in Puerto Rico in 1493, and claimed it as a colony of Spain, the island was never a free country. Although Spain gave autonomy to Puerto Rico by the end of 1897, in  May 1898, the United States invaded the island.

📚 Bookmark for Later: Places to Visit in Puerto Rico

7. US Citizens Don’t Need a Passport

Since Puerto Rico is an unincorporated territory of the United States, if you’re an American citizen, you don’t need a passport or any additional visa to visit and stay in Puerto Rico.

But, while you might not need a passport, there are a lot of other things you should pack for Puerto Rico (read that post for my full list!).

According to the Constitution of Puerto Rico, the country sports two official languages, Spanish and English, although this is more a written paper than truth. Even though English is part of public education, a relatively low percentage of the population speaks English. Source.

Although history says Spanish explorer Christopher Columbus discovered Puerto Rico in 1493 the island was already inhabited by Tainos, the indigenous people of the Caribbean.

The original capital of Puerto Rico was Caparra, an area between Guaynabo and Bayamón, but for its exposed and non-central location, it moved to Old San Juan.

👉 Read Next: The Top Things to do in San Juan

12. Puerto Ricans are a Mix of Races

Puerto Ricans include a mix of Taino, Spanish, African, and American races. Puerto Rico is filled with diversity, which you can see not only in the people, but also in their music, their food, and their customs.

13. The Island Has a Hurricane Season

Although Puerto Rico doesn’t have four defined seasons like the United States, it does have a rainy season parallel with the hurricane season and it goes from late June to November. During this season not only does it rains more, but the island is prone to suffering the impacts of tropical storms and hurricanes.

14. There is Also a Dry Season

The best time to visit Puerto Rico for dry weather is from December to May. During this period it rains less and there isn’t any risk of hurricanes.

15. Puerto Rico Claims the Only Rainforest in the USA

El Yunque National Forest is the only rainforest in the United States and it’s home to 183 animal species and 225 tree species.

16. The Island Is Home to Top World Beaches

Puerto Rico offers visitors beautiful beaches, one of the top being Flamenco Beach in Culebra. This beach is one of the top ten in the world for its white sands and turquoise waters. On the beach, there is a military tank from the time the US military occupied the island. Source.

👉 Love Beaches? Check out the Top Beaches in Puerto Rico.

17. The World’s 3rd Largest Cave Network is in Puerto Rico

18. And the Deepest Point of the Atlantic Ocean Too

Up the north Atlantic Ocean, you’ll find the Puerto Rico Trench, the deepest point of this ocean, with water depths over 8,400 meters. Source

Cerro de Punta is a mountain located between Jayuya and Ponce, part of the central mountainous area and it’s the highest peak of Puerto Rico, with 1338 meters or 4, 389 feet over sea level.

20. There are Three Bioluminescent Lagoons

Bioluminescence is quite a strange phenomenon and yet you can find three bioluminescent bays in Puerto Rico: in La Parguera in Lajas, Laguna Grande in Fajardo, and Mosquito Bay in Vieques Island.

👉 Read Next: The Best Things to Do in Fajardo

21.  Vieques Features the Brightest Bio Bay in the World

Talking about bio bays, Mosquito Bay in Vieques holds the Guinness Record for the brightest bioluminescent bay in the world, for its high concentration of dinoflagellates that glow when disturbed. Source.

22. The US Navy Used Vieques as a Base

The US Navy used Vieques as a naval base for bombings and military training for more than 50 years until the accidental death of a civilian sparked protests that led to the exit of the Navy from Vieques in 2003. Source.

23. There is a Forbidden Island

Desecheo Island, one of Puerto Rico’s islands, is off-limits to visitors since it got used as a training and test field by the United States’ Navy and today it still has explosive munitions. Visitors can only visit Desecheo Island’s coast. Source.

24. Puerto Rico is Home to the First Nuclear Plant in the Caribbean

Puerto Rico was home to the first nuclear facilities in Latin America. The BONUS Nuclear Plant was built in the early 1960s and it operated from 1964 to 1968. It was the eighth nuclear plant in the world and it was a prototype to test a form of nuclear energy. Today it’s a museum open to the public through previous reservations. Source.

25. Puerto Rico is the Base of the Largest Rum Distillery in the World

If you’ve ever tasted alcohol, then chances are you’ve heard about Bacardí Rum. Bacardí originated in Cuba and established facilities in Puerto Rico in 1930. After the Cuban Revolution, Bacardí continued its operations in Cataño, Puerto Rico, where you can now find the largest distillery in the world.

26. Puerto Rico Has The Oldest Operating Executive Mansion in America

La Fortaleza was one of the first fortifications built in Puerto Rico back in 1540 to protect the capital. In 1846 it got remodeled and since then it’s been housing governors of Puerto Rico. Up to today La Fortaleza or Palacio de Santa Catalina has been the home of 170 governors and it’s the oldest executive mansion in continuous use in America.

27. Speaking of Governors, the First Governor is in San Juan

Juan Ponce De Leon is one of the most famous Spanish explorers and the first governor of Puerto Rico. His remains are inside Catedral de San Juan.

28. San Juan Features Some of the Oldest Churches in America

Old San Juan is a city with 500 years of history and some of the structures in the city sport almost the same age. Iglesia de San José built in 1522 is the second oldest church structure in the American continent. The San Juan Cathedral’s original structure was built in 1521, but it was rebuilt in 1540.

📚 Related Reading: Top Things to Do In San Juan

29. Some of the Streets Have Original Cobblestones

The streets of San Juan are famous for many reasons. One of them is for the beautiful cobblestones that Spaniards used to pave the streets. You can still see some of the original ones in some streets of Old San Juan.

30. San Juan is One of the Busiest Ports

Every year around 1.6 million tourists arrive at San Juan city through the cruise ports. San Juan receives over 500 cruises yearly, which is why it’s considered one of the busiest cruise ports in the world. Source.

Castillo San Cristobal in Old San Juan is the largest fortification built on the American continent. This impressive fort took more than 150 years to build and even the United States contributed to its structure during WWII. Source.

32. You Can Celebrate the Oldest Carnival in the West Hemisphere

Historians believe the Ponce Carnival is one of the oldest carnivals in the West Hemisphere. One of Puerto Rico’s top festivities, the Ponce Carnival dates back to 1858 and it takes place every year one week before Ash Wednesday. Source

33. The Island Had its Own Pirate

Although stories about pirates might seem out of a movie, Puerto Rico did have a pirate known as Roberto Cofresí. The legend says this famous pirate attacked ships and distributed the earnings among the poor. Many locations in Puerto Rico got their name after him. It’s said he got buried on the shore next to Old San Juan’s cemetery, where many famous Puerto Ricans are. Source.

34. Puerto Rico Sports the Tallest Statue in the Americas

If you’re looking for the tallest statue of the Americas, then look no further than Arecibo, Puerto Rico. The sculpture, named The Birth of a New World, is a tribute to Christopher Columbus and his trips to the Americas. Its size is over 200 feet.

35. And Also the Most Stunning Beauties

The island doesn’t follow Daylight Saving Time, which means the hour doesn’t change in the winter as everywhere else in the United States.

37. Puerto Ricos Uses Both the Imperial and Metric Systems

Something very confusing about the measurements in Puerto Rico is that the country uses both the Metric and Imperial systems. The Metric system is mostly used to measure distances, but speed gets measured in miles per hour. Gas also gets measured in liters but other liquids like water and milk get measured in gallons.

38. Puerto Ricans Made a Governor Resign

Back in 2019, a controversial private chat conversation between the governor and a group of other politicians became public and sparked the ire in the country. Protests got held in front of La Fortaleza for more than a week, ending up in the resignation of a governor for the first time in history.

39. Puerto Rico Celebrates the Longest Christmas in the World

Puerto Ricans are famous for their liveliness and party spirit. That’s why Christmas in Puerto Rico lasts longer than in any other country. Christmas originally started after Thanksgiving, and lasted until late January, after the Fiestas de la Calle San Sebastián. This year cities are doing their official Christmas activities from October 30.

It’s not uncommon to hear the term Boricua in Puerto Rico. It’s a term Puerto Ricans use to identify and define themselves, and it derives from the original country’s name, Boriken. You’ll also hear it in the phrase, “You soy Boricua, pa’ que tú lo sepa’”.

41. Puerto Ricans Are (Over) Friendly

Puerto Ricans love to make visitors feel welcomed and to help them, but many visitors could have a culture shock since Puerto Ricans salute with hugs and kisses even the people they just met. They also use the informal form of Spanish to address everyone, regardless of age, status, or gender. It’s a cultural thing.

👉 Read Next: Is Puerto Rico a Safe Place to Travel Now?

That’s the end of 41 facts about Puerto Rico!

Before you go, continue reading about the top activities you can do on the island!