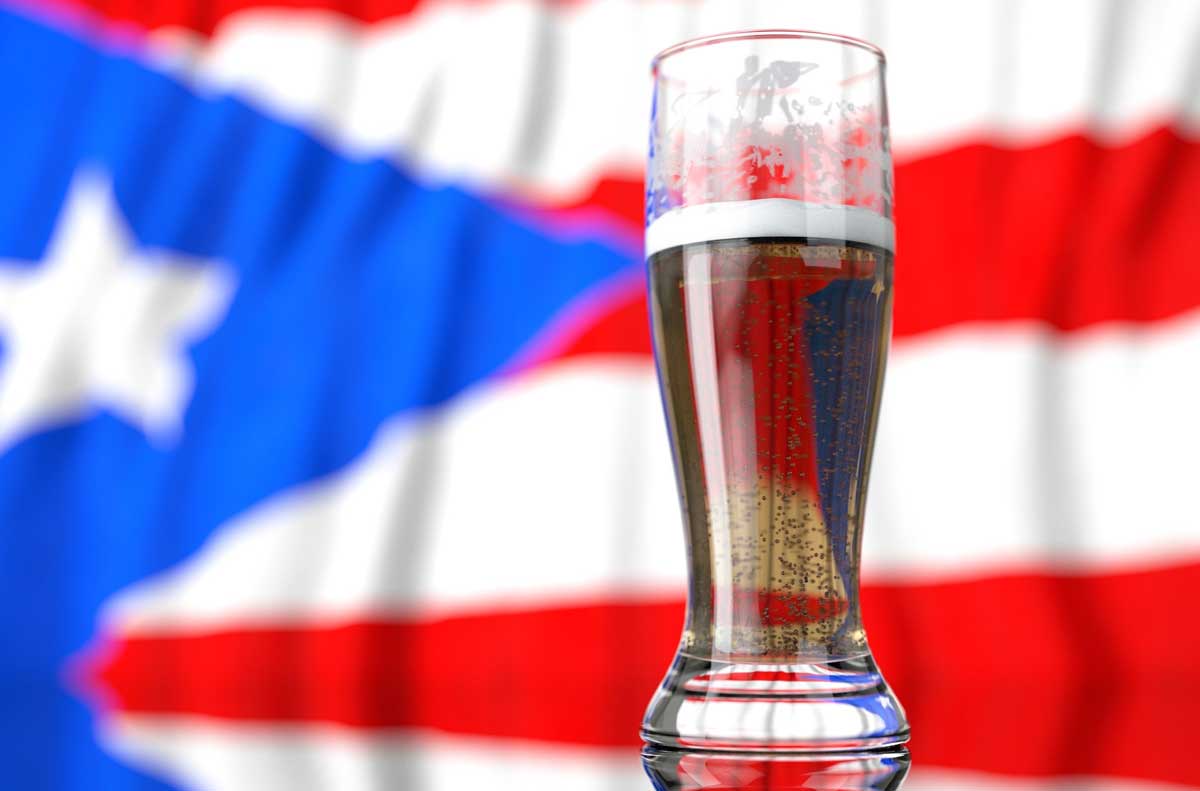 When you think of Puerto Rican drinks, the infamous piña colada is probably the first one that comes to mind.

But in truth, Puerto Rico has dozens of drinks and cocktails on offer, and trying them is one of the best things to do in Puerto Rico.

I’m a local with a passion for coffee and coquito, but you can find out which Puerto Rico drink is your favorite from the list below. You can also bookmark my list of the best Puerto Rican food for more inspiration.

A refreshing drink that brings together coconut and pineapple

Rumor has it that piña colada was invented in Puerto Rico, but the exact place is still a mystery.

Some people say it was in Barrachina in San Juan, and others say it was in the Caribe Hilton Hotel. Regardless, Piña Colada is a popular drink made with pineapple juice and coconut cream.

It’s served chilled and usually topped with whipped cream and a cherry. Although the popular version has rum, kids can enjoy the non-alcohol version.

A coconut-flavored drink with a touch of rum

Coquito is the national drink during the holiday season in Puerto Rico. If you have a sweet tooth, you can’t miss this coconut-based drink.

Coquito is similar to eggnog and is made out of sweetened condensed milk, coconut milk, coconut cream, egg yolks, rum, vanilla extract, and warm spices like cinnamon.

A drink made out of fermented tree bark with sugar

Maví is a Puerto Rican drink you can buy and enjoy while strolling through Old San Juan. Puerto Ricans prepare mavi by boiling the Mavi tree’s bark with spices.

To ferment the beverages, locals mix them with sugar, but the drink itself isn’t too sweet. Make sure to try it cold.

A versatile cocktail made with spiced rum and coconut milk

Chichaíto is another drink for coconut lovers. This alcoholic beverage is made out of anisette liquor (made of star anise liqueur and Palo Viejo white rum), coconut milk, and coconut cream.

But, locals like to prepare it in a variety of flavors. A popular option is chichaíto de Nutella, made with evaporated milk and Nutella.

Piña colada with a fun twist

Amaretto colada is a popular variation of the pina colada because of its rich and nutty flavor. With similar ingredients, this drink also has coconut cream, pineapple juice, and rum.

But, as its name reveals, the amaretto colada also includes amaretto almond liqueur. This version is perfect for those who already tried the piña colada.

A sweet, healthy, and energizing drink

Despite its long name, horchata is quite simple. It’s a drink made out of sesame seeds. Locals prepare horchata similarly to almond milk, by soaking and crushing sesame seeds. It’s a refreshing and nourishing drink that everyone can enjoy.

A frozen blended beverage made of fresh fruit and ice cream, you can find frappés in Puerto Rican restaurants and roadside food trucks.

Frappé is a favorite drink among locals and families exploring the outdoors. You can also find frappé made out of sweet treats like cookies, Nutella, or cake.

Submerged cheddar cheese in a cup of Puerto Rican coffee

🍹 Where to Find Coffee and Cheese: You can buy cheese in supermarkets and prepare this combination at home

If you’re a coffee lover then you already know that you can’t miss the coffee in Puerto Rico. But, have you tried it with cheese inside?

Puerto Ricans submerge a piece of cheese in the coffee and eat it after they are done drinking. It might sound odd, but I guarantee it’ll raise your coffee to another level.

🍹 Where to Find Ok Cola: In stores and supermarkets

OK Cola Champagne is a carbonated drink original to Puerto Rico. The drink was invented by Ángel Rivero Méndez, who founded The North Pole Soda Factory.

You can still find the factory’s building in Old San Juan. OK Cola is brownish and sweet, great for accompanying some Puerto Rico fritters.

A Puerto Rican rum with more than 100 years of history

Ron del Barrilito has been in continuous production since 1880, which is why it’s considered the oldest Puerto Rican rum.

The brand is famous for keeping all rums at 86 proof. The original rum was a three-star rum.

But, in the 1930s Edmundo Fernández created a two-star light rum that is perfect for mixing.

Connoisseurs can visit Hacienda Santa Ana, one of the popular Bayamon attractions, and fill and seal for themselves a 4-star bottle of rum.

A cocktail of liquor with fruit juice

Sangria is a delicious cocktail popular throughout the world. But, you’ll find the Puerto Rican recipes for sangria fit perfectly with the tropical weather of the island.

Puerto Rican sangria is a wine punch made with rum, red wine, fruit, and multiple juices. If you don’t want to visit a bar, you can also buy it at local supermarkets.

A local beer made with natural ingredients

🍹 Where to Find Medalla Light: In supermarkets, bars, and gas stations

If you like to try out local beers when you’re traveling, try out Medalla Light in Puerto Rico. Medalla is a lager-style beer with 4% alcohol.

It’s made with natural ingredients including malted barley and hops. It’s usually the beer locals enjoy together with food.

Sugar cane is the base for many Puerto Rico drinks. But, the most basic is called guarapo, and it’s very common in Latin America.

Guarapo is nothing more than sugarcane water, but some Puerto Ricans like to mix it with lime juice. If you have a sweet tooth, you can find this drink on roadside food kiosks.

A refreshing and simple drink for beach lovers

🍹 Where to Find Cold Coconut: On roadside kiosks

You will find one of the best Puerto Rican drinks comes directly from nature! Sipping water directly from coconut is not only refreshing but it completes your dream Caribbean vacation.

A rum that competes with Bacardi in Puerto Rico

🍹 Where to Find Don Q: In stores and supermarkets

Don Q is another popular Puerto Rican rum you need to try if you’re a rum lover. This rum dominates the local market and is crafted with molasses, mash, water, and yeast.

Later, it’s aged in American white oak barrels. Don Q’s amber rum is one of the rums used to prepare a Cuba Libre, made with Coca-Cola and squeezed lime. Locals also like to mix DonQ with cranberry juice.

A fermented drink made of quenepas and sugar

You’ve heard of mavi, coquito, and pitorro… But, have you heard about Bilí? Bilí is an artisanal drink found usually in Culebra and Vieques.

It consists of rum, quenepas, brown sugar, and vanilla extract that gets aged for a month in a dark place. Tasting Bilí promises a unique experience for those exploring the municipality islands.

A world-renowned drink with a local touch

Though it originated in Cuba, Mojito is one of the most popular cocktails throughout the world. If you’re a fan of it, you shouldn’t miss a glass of the Puerto Rican version.

Try the cousin of the piña colada

The chi chi is very similar to a piña colada and is also made with pineapple juice and coconut cream. The difference is that chi chi replaces rum with vodka.

Locals serve this drink in a glass of wine topped with a pineapple wedge. It’s a great option for those that prefer vodka to rum.

🍹 Where to Find Coquito de Pistachio: Seasonally in Shops around Puerto Rico

The coquito recipe evolved through the years, and nowadays Puerto Ricans love its variations as much as the original coquito. One of those variations is coquito de pistachio.

This coquito has evaporated milk, coconut cream, coconut milk, and pistachio ice cream. And of course, coquito isn’t coquito without rum! But, don’t worry, you can always serve a rum-less version for kids and non-drinkers.

Homemade Pitorro is hard to come by, particularly because it’s illegal! Pitorro is a spiced rum with a high alcohol concentration that can surpass 100 proof.

Known as the Puerto Rican moonshine, Pitorro is also a holiday drink popular during the Christmas season. It’s made with sugar cane molasses and fermented for a year in a dark place with citric fruits or nuts.

Luckily, you can taste the legal version produced by different distilleries in the country such as Destilería Coquí, Destilería PitoRico, and Destilería Cruz.

🍹 Where to Find Malta: In stores and supermarkets

Malta India is not for everyone’s taste buds. Yet, if you’re looking for something most Puerto Ricans drink, this is the answer.

Malta is a non-alcoholic soft drink fermented and brewed from barley and hops. It’s sweet and syrupy, and it’s served cold.

FAQs About Drinks in Puerto Rico

Does Puerto Rico have tequila?

Puerto Rico doesn’t have tequila on the island. Tequila is originally from Mexico, and it’s a distilled liquor made from the blue agave’s fermented juice. Although Puerto Ricans do enjoy drinks with tequila, the liquor is imported into the island.

What is a popular drink in Puerto Rico?

What kind of alcohol do Puerto Ricans drink?

Though Puerto Ricans drink various kinds of alcohol, the island is famous for its rum. There are plenty of local cocktails that use Puerto Rican rum.

Thanks for reading my list of the best Puerto Rican drinks! While you’re out hunting down drinks and food, don’t miss out on these top places to visit in Puerto Rico.