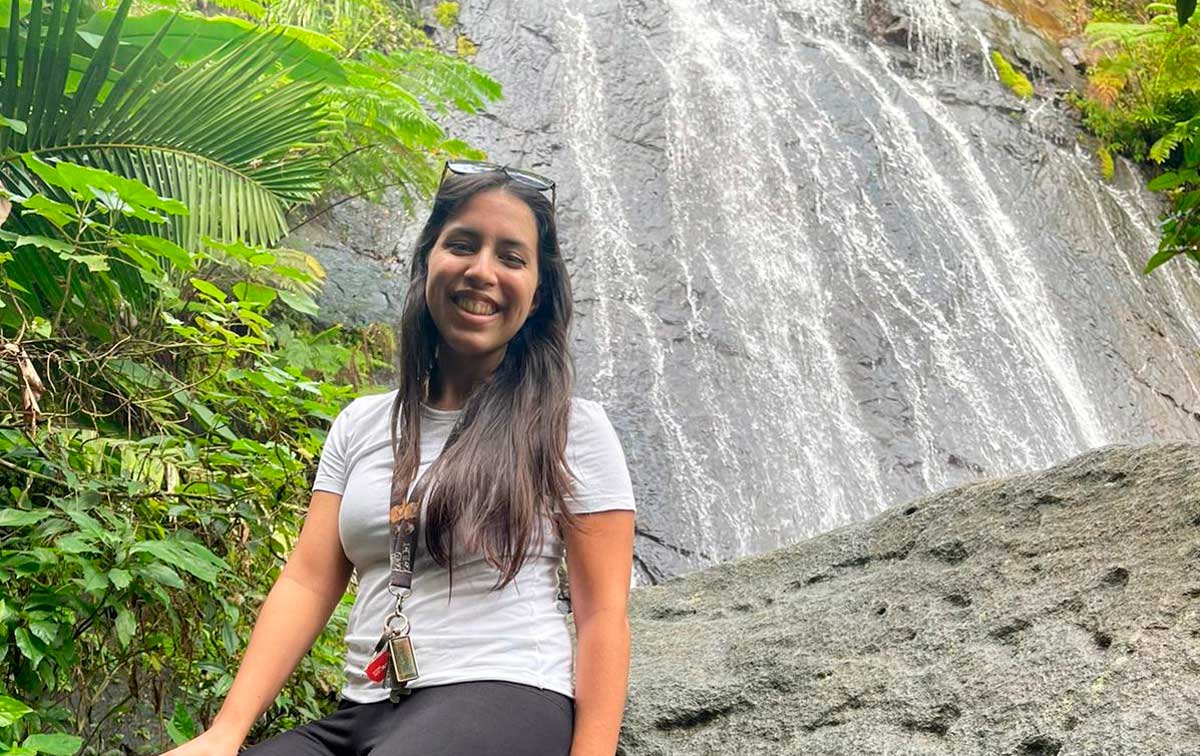 The best Puerto Rico landmarks are all about food, culture, nature, and history. Puerto Rico is a fairly small island, so whether you’re interested in black sand beaches or historical forts, getting to most (or all) of the top sites during your visit is totally doable.

I’ve lived in Puerto Rico all of my life and, after exploring the island for years, I know which sites are essential stops on your Puerto Rico itinerary.

If you haven’t pinned them on your map yet, here are 21 Puerto Rico landmarks you need to add to your Puerto Rico trip.

Explore the only tropical rainforest in the United States

📚 Bookmark for Later: Fun Places to Visit in Puerto Rico

Tour a historical fort almost as old as Puerto Rico itself

The most famous landmark of Puerto Rico, Castillo San Felipe del Morro (also known as El Morro) is a historical fort almost 500 years old. It was founded by the Spaniards in 1539 to protect the walled city of Old San Juan from incoming sea attacks.

Castillo San Felipe del Morro features six floors with dungeons, barracks, and an iconic lighthouse you can see from outside. In 1983, El Morro became a designated UNESCO World Heritage Site.

Photograph a lighthouse with a breathtaking view of the ocean

The lighthouse marks the union of the Caribbean Sea and the Atlantic Ocean in the Mona Passage, where it helped ships transit through the southeast entrance. Admiring the view is one of the things to do in Cabo Rojo that nature and photography lovers can’t miss.

Cross a historical tunnel to reach a hidden beach

The Guajataca Tunnel is one of the most visited historic landmarks of Puerto Rico. This tunnel located between Isabela and Quebradillas stands as one of the few remnants of the Sugar Cane railway – built between the late 19th and early 20th century under the American Railroad Company of Puerto Rico.

The Guajataca tunnel was part of Lane A that went from San Juan to Aguadilla. Now the tunnel is a popular plaza with food kiosks and a trolley that recreates the railway’s route.

La Fortaleza, also known as Santa Catalina Palace, was built between 1533 and 1540. While its original purpose was to defend Old San Juan, the structure’s location wasn’t ideal, and so it instead became the official executive mansion from the 16th century until today.

La Fortaleza holds the record of being the oldest executive mansion in use in América. It’s one of the top landmarks in Puerto Rico for history lovers.

Plan your trip with my ultimate guide to visiting La Fortaleza.

👉Did you know? Castillo San Felipe del Morro, the San Juan Cathedral, La Fortaleza and Castillo San Cristobal are part of the National Register of Historic Places in the old city of San Juan. These are just some of the popular attractions of San Juan.

Visit a historical chapel with a legend behind its origin

Capilla del Santo Cristo de la Salud is a small chapel from 1753 that features a peculiar altar made with gold and silver ornaments, multiple paintings from Puerto Rican artists (including José Campeche), and other objects from the 18th century.

Located at the dead-end of Calle El Cristo, legend says Capilla del Cristo was built after a man miraculously survived a fall from the cliff where the chapel is on.

This beach has white fine sand with clear waters perfect for snorkelers, divers, and beach enthusiasts. But perhaps its main attraction is the military tank on the shore left behind by the United States military.

👉 Are you a beach lover? Playa Flamenco is one of Puerto Rico’s top beaches. Check out my picks for the best beaches to visit in Puerto Rico.

Eat and feed the birds on a beachfront boardwalk

La Guancha Boardwalk is one of the best Puerto Rico landmarks for foodies. This boardwalk is located on the coast of Ponce and has multiple food stalls that sell the best of Puerto Rican food – including alcapurrias and bacalaitos.

Besides the flavorful food, La Guancha’s main attractions are the pelicans and fish that roam around the coast waiting for people to feed them. If you’re into watersports, you can also rent kayaks in the nearby marina and head out to the bay.

Paseo de La Princesa is an iconic promenade of Old San Juan. The walk goes around the walled city until it reaches San Juan’s Gate, the only gate left of the five gates that allowed access to Old San Juan.

Besides a beautiful view of the San Juan bay, Paseo la Princesa is home to the iconic Raices Fountain, a celebration of Puerto Rico’s heritage. If you visit Puerto Rico during the holidays, then the promenade is ideal for taking a stroll with your family, as it lights up with ornaments and festivities.

Roam the mansion of the DonQ Rum creators

El Castillo Serrallés was originally the house of the Serrallés family, creators of the DonQ Rum. One of the top landmarks in Puerto Rico, the main house features beautiful Spanish Revival-style architecture along with original furniture.

The interior has four floors with bedrooms, a library, a solarium, and a terrace. The surrounding grounds are home to a butterfly nursery, a Japanese garden, and a giant cross structure known as Cruceta del Vigia from where you can see the south coast of the Puerto Rican island.

Wander through the second oldest city in Puerto Rico

San Germán is Puerto Rico’s second-oldest city (after Old San Juan) and is home to beautiful cobblestone streets and neoclassical-style structures that will delight any history enthusiast.

But, the main attraction of San Germán, and one of the best Puerto Rico landmarks, is its historical church known as Porta Coeli. Constructed in 1609, the structure was originally a convent before becoming a church in the 18th century. Today, Porta Coeli is a Museum of Religious Art.

One of the most popular Puerto Rico landmarks, Parque de Bombas is known as the first fire station in Puerto Rico.

The iconic black and red building were built in 1882 to host the local group of firefighters after an 1820 fire destroyed multiple houses in the city. Parque de Bombas is now a museum located in Plaza Las Delicias where history enthusiasts can also find other popular Ponce attractions.

Dance salsa with locals in a non-traditional market

Travelers that want to meet locals while enjoying the best of Puerto Rico’s food can’t miss a stop at La Placita de Santurce.

Admire a cemetery located next to the ocean

Though a cemetery may not be a typical item on your travel itinerary, Puerto Rico’s Santa Maria Magdalena de Pazzis Cemetery is gorgeous and looks more like a sculpture garden.

Located in Old San Juan, right next to the San Felipe del Morro Castle, the Santa Maria Magdalena de Pazzis is the final resting place of some of Puerto Rico’s famous residents and figures, including governors, singers, politicians, and activists. It’s also a scenic spot for photographers.

Tour the only House of Laws of Puerto Rico

Not only was this landmark in San Juan built-in 1929 with a neoclassical-style architecture, but it also hosts the history of politics of the country. It features amazing murals and mosaics designed by popular Puerto Rican artists such as Rafael Tufiño.

Discover the hidden tunnels of this Spanish fort

Although less popular than El Morro, San Cristóbal Castle is one of the most famous landmarks in Puerto Rico and San Juan for history and culture lovers. Built between 1634 and 1765, the fort’s purpose was to protect San Juan from incoming land attacks. The San Cristobal Castle is the biggest fort built by the Spaniards in the New World and features an incredible network of tunnels.

Learn about the most important Taino archeological site in the Caribbean

Parque Ceremonial Indígena de Caguana is one of Puerto Rico’s famous landmarks outside San Juan. This site features 10 different plazas left behind by Taino that inhabited the island before the Spanish colonization.

These plazas (surrounded by monoliths with pre-Columbian petroglyphs known as bateys) were the center of celebrations, reunions, games, and rituals. The archeological site also has a small museum where visitors can learn more about the Taino and their traditions.

Recreate the 19th-century lifestyle on a plantation in Puerto Rico

Hacienda Buena Vista is one of the best-preserved plantations in Puerto Rico and a historic landmark for culture fans.

Located in Ponce, this plantation features architecture from the 19th century and depicts how life was for both slaves and masters. Hacienda Buena Vista also features a unique working hydraulic turbine powered by the Cañas River and its complex canal system. These redirect the river’s water into different parts of the hacienda.

Hop between the attractions of this unique Puerto Rico structure

One of San Juan’s historic sites, Cuartel de Ballajá is a building across El Morro that was once the barracks for Spanish soldiers.

Today, Cuartel de Ballajá is a cultural center that hosts multiple sites. These include Museo de Las Americas, a museum with exhibitions about the Taino, Spanish and African heritage in Puerto Rico and the American continent, a dance school, a rooftop garden, and a coffee shop.

Kayak in the brightest bioluminescent bay in the world

Visiting Mosquito Biolumisnicent Bay is one of the most fun things to do on Vieques for outdoor adventurers but, more than a popular attraction, Mosquito Bay is a natural wonder.

Categorized as the brightest bioluminescent bay in the world, Mosquito Bay in Vieques Island mesmerizes visitors with its glow even on nights when the moon is partially out. The bioluminescent bay has a large number of dinoflagellates that make the water glow when they’re disturbed.

Hike to historical lighthouse within a nature reserve

If you’re visiting the east side of Puerto Rico, then you can’t miss out on Las Cabezas de San Juan Nature Reserve. This reserve is home to some of the best things to do in Fajardo, including pristine beaches, swimming spots, a bioluminescent bay, and the historic Cabezas de San Juan Lighthouse.

The Cabezas de San Juan Lighthouse is a neoclassical style lighthouse constructed in 1880 with an elegant and clean appearance that contrasts with the surrounding foliage of the reserve.

Nothing tells you more about a country than its landmarks, and now you know some of the best Puerto Rico landmarks!

If you’re looking for more great activities, then continue reading my guide on what to do in Puerto Rico.