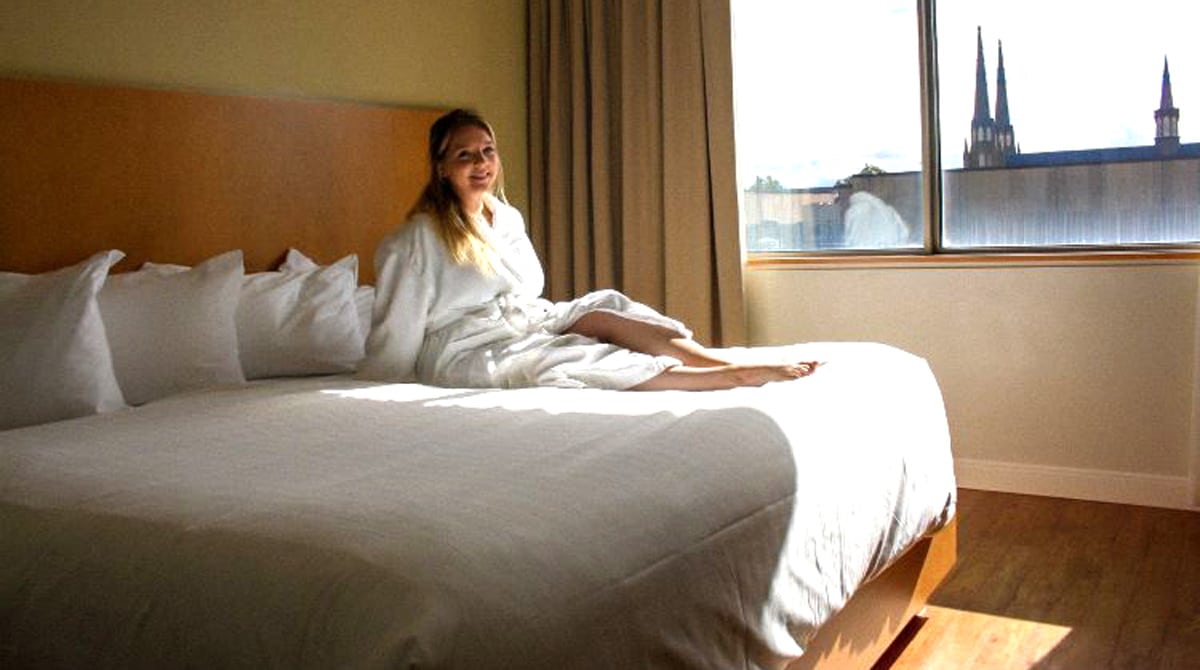 Choosing where to stay in Prince Edward Island is a strategic decision.

With a landmass under 6,000km² (3728miles²), PEI is small enough to see all the major sites in just a few days, yet big enough to put some destinations out of a day trip’s reach if you stay in the wrong area.

A Canadian prairie local, I recently paid a visit to the east coast for the primary purpose of finding the top places to stay and the best things to do on Prince Edward Island.

By chatting with locals, touring a ton of properties, and staying in the hotels myself, I came away with important info on where you should stay to optimize your trip.

In this article, I’ll guide you through everything you need to know in order to make the best decision about where to stay (including my hotel recommendations).

Want the short answer to where you should stay in Prince Edward Island?

Here are my top property choices on the island, depending on your travel style:

Before you decide on a Prince Edward Island hotel, you need to decide what regions you want to prioritize.

Though the east and west sides of the island are decidedly more rural, they are great places to base yourself if you have specific items you want to check off your bucket list (we’ll get into those items more below).

Home to just 40,000 people, Prince Edward Island’s capital of Charlottetown is very much the beating heart of the island. Though it’s the province’s largest city, it very much has a small, homegrown vibe to it and the locals are just as friendly as you’ll find in more rural areas.

The core of Charlottetown is easily walkable and very safe, and all the major hotels, restaurants, and things to do are conveniently right in the center of it all.

On my PEI visit, I stayed right in Charlottetown and, though I did rack up a few miles on the road, I found it a great location from which to explore other destinations around the island. Check out my guide to Charlottetown hotels for the best boutique inns and bed and breakfasts.

👍 Pro tip: Notable sit-down restaurants in the island’s capital tend to fill up on a nightly basis. Don’t take the chance of not getting a table and make reservations in advance.

Pros of staying in Charlottetown:

Cons of staying in Charlottetown:

The area surrounding the capital city, central Prince Edward Island stretches between Charlottetown in the east and just before Summerside in the west.

It includes north and south coastal regions and is home to the Green Gables Heritage Place, red cliffs, Prince Edward Island National Park, North Rustico, and Victoria. Summertime festivals in this region are plentiful and it’s a great option if you don’t want to stay right in the city but want to be close enough to experience its entertainment.

✨ Tour alert! If you’re a fan of Anne, then you gotta check out this Anne of Green Gables Heritage Place tour from Charlottetown. It’ll take you to the best spots!

Including the town of Summerside and everything west, western PEI is known for its vast stretches of open area, quirky sites, and absolutely stunning north cape.

Though its population is sparse, it makes for a great place to stay if you love peaceful nature and have a penchant for scenic hikes.

Including everything east of Charlottetown and the #2 highway heading north, eastern PEI is known for its historic lighthouses, red sand beaches, ocean adventures, and walking trails.

Like western PEI, the east side of the island is fairly sparse population-wise, but it packs a punch with things to do. In particular, it’s home to Greenwich Park, Basin Head Provincial Park, deep-sea fishing excursions, Point Prim Lighthouse, and Cape Bear Lighthouse.

Tips for Staying in PEI

Renting a car on PEI is essential to see all the attractions. Prince Edward Island is small, but it’s still much too big to navigate without wheels.

Before you book, check Discover Cars to compare rates and get the best bang for your buck. They’re my car rental go-to!

If you’re traveling to PEI for vacation, then it’s important to note that it is very much a seasonal destination.

Peak season for travel to Prince Edward Island is in the summer (May through September), and many hotels, attractions, and restaurants are closed outside of these specific months. I visited in late September / early October, and I found that though there was still a lot to do, many businesses shut their doors precisely on October 1st.

In accordance with the above point, because PEI’s peak season is only five months, make sure you book your hotel, car rental, festival tickets, and activities as early as possible.

A condensed tourism season means that everyone books their travel during the same time of year, driving up prices across the board and leaving a lot of businesses without vacancies.

Plan for the Unexpected

Though Canada is a very safe country, it’s still a global health crisis, so it pays to think ahead and have a plan for the unexpected.

Purchasing travel insurance is a great way to secure peace of mind in case your plans go awry. World Nomads is my go-to provider, but check out our Canada travel insurance guide for more info.

Book More Than One Location

As you can probably tell, though PEI is the smallest province in Canada, it does require a bit of driving to get from the western tip to the east.

To get the best of all worlds, I recommend splitting up your hotel stays so that you book a couple of nights in each area. This way, you can plan your road trip in advance and see the sites without spending the bulk of your holiday in the car.

👉 Read Next: The Best Places to Visit in Canada

How many days do you need in PEI?

Though Prince Edward Island is Canada’s smallest province, it does pack a punch with things to do and see. For this reason, I’d recommend at least five days to adequately check out the top sites.

What should you not miss on Prince Edward Island?

Some of the top attractions on Prince Edward Island include the Anne of Green Gables Heritage Site, Cavendish Beach, a tour of the Great George Hotel, the Confederation Trail, Cape Bear Lighthouse, and Singing Sands Beach.

Prince Edward Island has gorgeous sandy beaches of both the white and red variety. Some of the best beaches include Cavendish, Greenwich, Brackley, Basin Head, Cedar Dunes, and Jacques Cartier.

What is the warmest part of PEI?

The warmest parts of PEI include the southern region and the east. In particular, Singing Sands Beach on the west coast has some of the warmest sea waters in the province.

That’s it for my guide on where to stay and the best hotels in Prince Edward Island!

Though it’s a small province, there’s a great variety of accommodation options, and you’ll have no problem booking the perfect property for yourself.

For more information about travel in the great white north, check out these 16 essential Canada travel tips.

Have fun in Prince Edward Island!