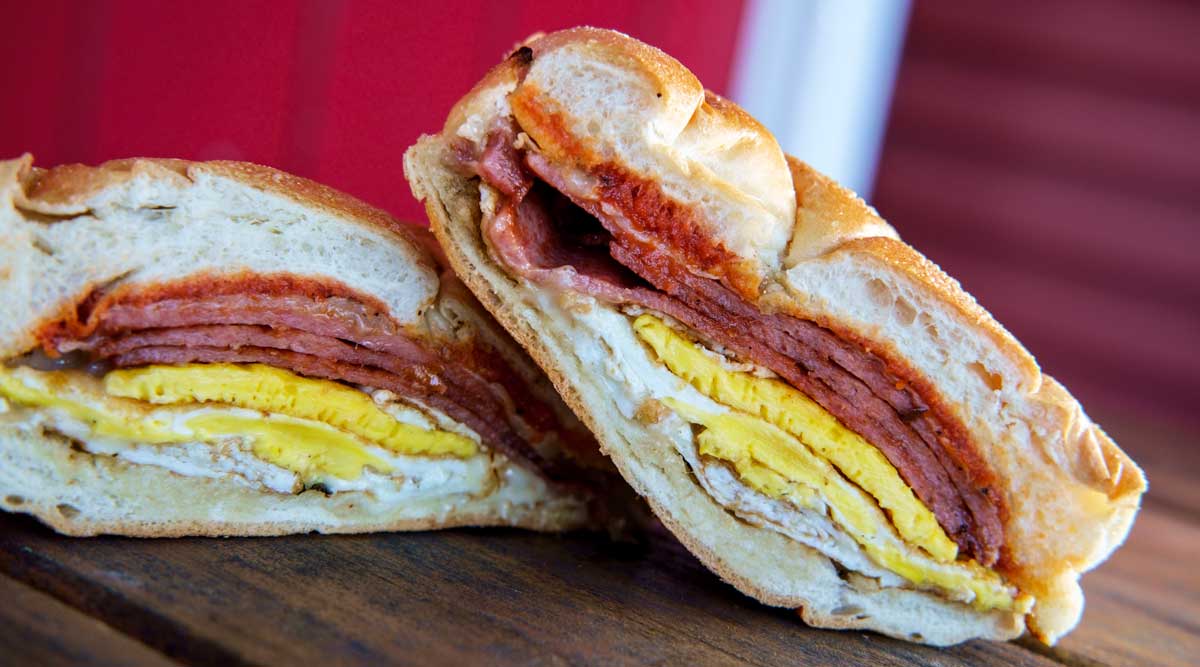 The Garden State is home to many delicious and interesting dishes. Of course, we can’t totally generalize though, as some New Jersey foods are more popular in some regions of the state than others.

As your resident New Jersey foodie, I’ve been eating the quintessential New Jersey foods my whole life and know exactly where to find them. In this article, I’m going to spruce up your New Jersey activity list by introducing you to some of the best and most popular dishes. I hope you’ve eaten!

If you like hot dogs, then you don’t wanna miss out on an Italian hot dog in New Jersey. Starting off with your classic hot dog, it’s then loaded up with peppers, onions, and potatoes. Finish it off with a drizzle of ketchup, and you’re ready to savor this hot dog.

You can find Italian Hot Dogs in a variety of places. Some of the best are at Jimmy Buff’s in Kenilworth, as well as many small corner-store sandwich shops in Newark.

The Taylor Ham, Egg & Cheese is the most popular dish in New Jersey and a staple breakfast food. You can find it at almost any place that serves breakfast. Some people modify it to have without egg – but trust me, it’s much better with.

Taylor Ham is often confused with Spam, but these are two very separate things. While Spam is thicker and usually square in shape, Taylor Ham is round and has a smoother texture.

👉 Pro Tip: While we call it Taylor Ham in North Jersey, it’s often referred to as Pork Roll in Central to Southern New Jersey. Whatever you decide to call it, it’s delicious everywhere.

When people think of pizza, the most common American locales they think of are New York and Chicago. Many forget that New Jersey also has amazing specialty pizza.

I don’t need to tell you what pizza is, everyone knows it’s awesome! But there’s just something special about New Jersey pizza. The crust is a wonderful balance of thick and thin. You can request thin crust if you like, or sink your teeth into a thick slice of Sicilian.

For the best pizza, avoid big chains like Papa John’s and pop into one of the corner pizza shops. You won’t regret it.

👉 Pro Tip: If you’re into a little kick, make sure to try Buffalo pizza at the Village Trattoria. The mix of bleu cheese, chicken, and a touch of hot sauce is beyond delicious.

Inside-out pizza with tomato sauce over the cheese

This is essentially a reverse (or inside-out) pizza. It’s more of a Central and Southern New Jersey delicacy, as it originated in Trenton, NJ. Because of this, you’ll find some of the best tomato pies closer to Trenton. This thin crust pizza has cheese melted on the dough first, then the tomato sauce is nicely spread on top.

The saucy layer on top adds a new dimension of flavor, especially for tomato sauce lovers.

Salt water taffy has its origins in Atlantic City. Despite its moniker, there’s no actual salt water used in making Salt Water Taffy. Many report that it actually tastes very similar to regular taffy, but it’s delicious nonetheless.

The name comes from the fact that it was made in Atlantic City where you, of course, find the beach and salt water. There are some great things to do in Atlantic City, and tacking on the task of finding the best saltwater taffy is a great side project.

Just as its name indicates, Disco Fries are like a party in your mouth – they’re deliciousness at its best. French fries covered in melted cheese and drizzled with delicious brown gravy. This is one of my top favorite dishes in New Jersey.

Disco Fries are a staple at many diners. Since New Jersey has the most concentration of diners in the United States, you’ll be able to find Disco Fries almost anywhere.

So this isn’t strictly a New Jersey food, hence the name. It’s very popular in the West New York/North Bergen area of New Jersey, where you’ll find a large Cuban population. Being born of a Cuban mother, this was popular in our home growing up.

The Cuban sandwich is also known as a Cubano. It’s filled with roasted pork, savory ham, pickles, and mustard, then topped off with melted swiss cheese. It’s typically served on Cuban bread that’s then put on a griddle until it’s toasted to perfection. I’ve also seen it served on a toasted sub roll in some places. Either way, es sabroso (delicious)!

👉 Pro Tip: The West New York/North Bergen area is a great place to grab a bite. With a large Hispanic population, be sure to enjoy some other Latin flavors while you’re there.

Savory beef patty on sub bread with peppers and potatoes

Every time I hear Italian Cheeseburger, it conjures up great memories. My friends and I would grab one of these bad boys from the corner store after a long week.

The peppers, onions, and potatoes (or in some cases, french fries) mix together perfectly. They’re then slathered with ketchup and mayonnaise and served up on sub bread. Most places let you modify them (i.e. I ask for no mayo), but they’re perfect as is.

It’s to be noted, that this is most popular in North Jersey (the region in NJ I’m from), so it’s not as common to find in South Jersey. Not impossible though. It’s common to find these savory sandwiches in Newark, especially in small Italian restaurants in Downtown Newark. Grab one if you happen to be staying in Newark.

This isn’t to be confused with an Italian Cheeseburger. An Italian Sandwich is another delicacy all on its own. Its highlights are fresh, cold deli meats stacked high. They’re then topped with smooth provolone cheese and served on Ciabatta bread.

You can also have it served on another bread of your choosing. Because it’s so common, you can get an Italian at most delis and sandwich shops throughout the Garden State.

Sandwich on a soft hoagie roll

At the outset, hoagies look like regular subs. In a lot of ways, they are, but the difference is in the bread. Hoagie rolls are a bit shorter than your foot-long subs. And there’s just that special something about the softness of the bread that gets you every time.

Now, hoagie is a term used in Central to South Jersey. In North Jersey, we usually call them subs, but the term can be used interchangeably. Plus, there are so many ways you can customize your hoagie to make it especially delicious for you.

Chicken seasoned with garlic, spices, and cheese then topped with balsamic vinaigrette

One thing I love about New Jersey is that we have a large Italian population. As a result, you’ll find many Italian dishes – one of my favorite cuisines.

Chicken Savoy is next up on the list of the Garden State’s delicious Italian cuisine. It involves first taking chicken – whether it’s cut-up pieces of a whole chicken or chicken breasts – and seasoning it to perfection with garlic, olive oil, and a variety of Italian spices.

It’s then sprinkled with a dash of cheese. Then, it’s finished off with a healthy drizzle of Balsamic Vinaigrette. Bon appetit!

Hefty sandwich with deli meat and cole slaw on rye

Not to be confused with the traditional sloppy joe most people are familiar with. The New Jersey version of the sloppy joe is actually a little less messy – but no less delicious.

This is a thick, hefty sandwich. It features cold deli meat, cheese, coleslaw, and Russian dressing, all served up on rye bread. You can customize the meats and cheeses to your preference. Every deli has its own spin – and they’re all delicious.

👉 Pro Tip: The Jersey Sloppy Joe can sometimes be mistaken for a Reuben. But a Reuben involves corned beef. Both are delicious though.

All your favorite foods in one sandwich

This one isn’t for the faint of heart – literally! The name is fitting as this sandwich is loaded with all sorts of fatty, but yummy, goodness.

It starts off with sub bread, which is then loaded with chicken strips, mozzarella sticks, and fries. Other add-ons you might find are chicken cutlets, gyro meat, and cheesesteak meat. It pretty much contains all the best foods in one place.

These sandwiches are popular fare of the grease trucks at Rutgers University. In fact, it’s a college student who invented this fatty mix. It’s not something you want to eat all the time. But it’s definitely worth enjoying while you’re paying a visit to New Jersey.

🍽️ Where to Find Campbell’s Soup: Any supermarket

So while Campbell’s Soup may not be one of the top dishes in New Jersey, it actually has a special place here. Campbell’s soup actually originated in the Garden State.

The Campbell’s Soup Company began in 1869 in Camden, NJ. In fact, to this day, the Headquarters is still in Camden, NJ – over 150 years later. And who doesn’t love some nice hot chicken noodle soup on a cold night?

Since it’s a common grocery item, you can find Campbell’s soup in any supermarket. You can even find it in stores like Target and Wal-Mart.

Blueberries are just one of New Jersey’s many farm-fresh produce. In fact, in 2020, New Jersey was the number one producer of blueberries in the United States.

You can find Blueberries in many supermarkets from early June through early August. But the best place to get the most delicious blueberries is at local farmers’ markets. The farmer’s markets are also open during these months, so you’ll find a plethora of delicious produce.

If you’ve ever watched Cake Boss, then you’re definitely familiar with Carlos Bakery. We have the flagship location right in Hoboken, NJ.

After all of the delicious foods you’ve tried and enjoyed in New Jersey, dessert is next. Carlos Bakery is definitely a place you don’t want to miss. The wide array of delectable desserts is sure to draw you in and have you coming back again for more.

What is New Jersey’s most famous food?

The most popular food in New Jersey is the Taylor Ham, Egg, and Cheese. It’s also known as Pork Roll.

Are there Diners in New Jersey?

There is a high concentration of diners in New Jersey. So much so that New Jersey is known as the Diner Capital of the World.

What dessert is New Jersey known for?

Sweet treats that New Jersey is known for include saltwater taffy and baked goods from Carlos’s bakery.

With so many great food options to choose from, they’re just another reason to visit the great state of New Jersey. Looking for more to do in New Jersey? Check out the best places to visit in New Jersey for some awesome ideas, including restaurants to try.

Yvette Griffith is a New Jersey-based Freelance Travel Writer who loves all things travel! She takes advantage of every opportunity to get away, often with her young daughter, as they explore their state as well as the world around them. From Southern Cali, to cruises to the Caribbean, to local adventures, Yvette is always ready for her next adventure.