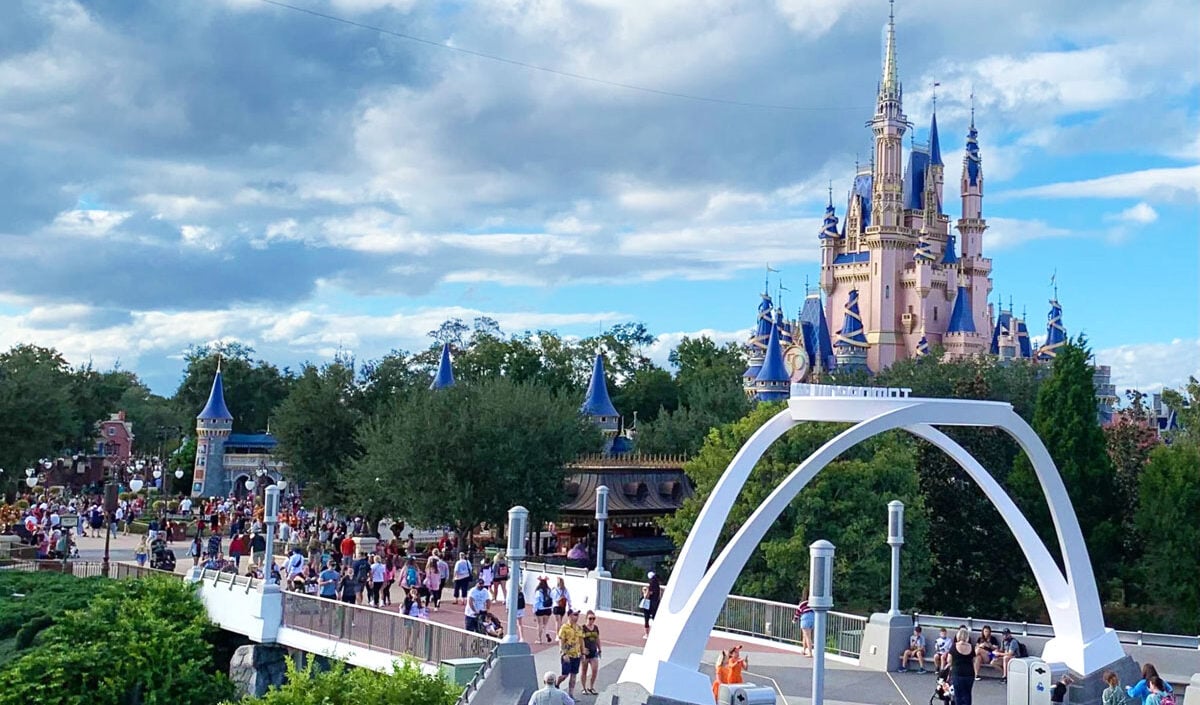 The best time to visit Disney World, especially for fewer crowds and good prices, is in September. Summer vacation has ended and most families are back home, settling in for the new school year.

Of course, September is just one of the many “low periods” that Disney experiences throughout the year. There are some differences on the best time depending on if you are looking for great weather, short lines, etc.

I was a Cast Member at Disney for 12 years and I visited the Disney parks frequently, so I have seen how the crowds and prices can fluctuate throughout the year. In this guide, I’ll help you decide exactly when to visit Disney World for the best experience.

When is the Best Time to Visit Disney World

When to Visit Walt Disney World for Good Weather

The best time to visit Disney World for pleasant weather is in March-May. April receives the least amount of rain on average. The high temperatures range from 75-85 degrees, which is perfect for walking around the theme parks or taking a dip in the pool.

October and November also offer comfortable temperatures. However, hurricane season runs through the end of November. Since most people plan their vacations far in advance, I recommend spring over fall due to the risk of tropical storms or hurricanes.

📚 Related Reading: In addition to the great weather, find out why spring is my recommended time to visit Orlando.

When to Visit Walt Disney World for Cheap Prices

The cheapest time to visit Walt Disney World is in January and February, excluding holiday weekends. By the second week of January, the holiday crowds and WDW marathon runners have cleared out. From then until spring break starts in early March, you can find hotel deals. Plus, park tickets will be at their lowest rates. Read my Disney World budget guide for more tips.

There are other affordable periods throughout the year though. The cheapest days to visit the parks or stay at Walt Disney World are Sunday-Thursday. Plan your visit when children are in school, no festivals or events are taking place, and there are no national holidays to save the most money.

📚 Related Reading: Check out my guide to visiting Orlando on a budget to read my tips on how to make your vacation to Orlando as affordable as possible.

When to Visit Walt Disney World for Sunny Pool Days

April through early October is the best time to visit Disney World for sunny pool weather. The Walt Disney World hotels and nearby hotels have some of the best pools in Florida, so I always recommend planning for some swim time.

April, May, and October average the least amount of rain, but the temperatures will be cooler than in the middle of summer. There is an afternoon thunderstorm almost every day of the summer at Disney World. Don’t let this ruin your pool plans though, because the storms typically move through within an hour.

🛎️ Want a Hotel With an Epic Pool? Check out hotels near Walt Disney World on Booking and read my article, where to stay in Orlando, to see my recommendations.

When to Visit Walt Disney World for Families and Kids

To maximize the fun for children, I recommend visiting Walt Disney World during one of the low seasons. Families can spend less time waiting in lines and therefore enjoy more attractions during their visit.

Some of these low periods include:

Since many children cannot miss school for a vacation, the next best time to visit Disney World for families would be on a long holiday weekend. These weekends bring in crowds, but it will not be as bad as the summer or winter holidays.

👉 Pro Tip: If you have some extra time during your trip, head outside of the resort and check out some of the fun stuff to do in Orlando with your family.

When to Visit Walt Disney World to Avoid Crowds

The most prolific crowds at Disney are during summer break and the winter holidays. Throughout the rest of the year, you’ll find the least-crowded times on weekdays when school is in session. In my experience, January, February, and November (other than Thanksgiving week) have the lowest crowds overall.

Disney hosts special events, like festivals and marathons, throughout the year. These events can draw in unexpected crowds during low seasons. I like to check out this crowd calendar. This is an unofficial calendar that uses past data, hotel and ticket prices, and event dates to estimate the crowd levels at different Orlando theme parks throughout the year.

When to Visit Walt Disney World for Adults

Many people think of Disney World as a vacation destination for families, but there are plenty of activities for grown-up kids too. Epcot’s International Food and Wine Festival, which takes place in the fall, is a huge draw for adults looking to eat and drink “around the world” while touring Epcot. Thanks to the popularity of the Food and Wine Festival, Disney now offers specialty food and drink options at all of Epcot’s festivals throughout the year.

There will always be kids at Walt Disney World, but for adults looking to minimize the crying babies and over-tired children during their vacation, plan a visit while school is in session.

👉 Pro Tip: Parents are less likely to pull their kids out of school during testing weeks, so visiting Disney World during the end of school semesters often means fewer kids at the parks.

👉 A Note on Events: Disney hosts special events and festivals throughout the year, including official and unofficial events. The event dates and names regularly change. I have listed all the events in the months that they traditionally take place. Always check Disney’s events website for the most up-to-date information.

The rest of the year is generally comfortable and you’ll see a variety of clothing choices. Locals tend to bundle up when the temperature drops below 70 degrees but visitors from up north will still be rocking shorts and t-shirts (see my Disney packing list for tips).

The summer is the rainy season at Disney World. I’m sad to tell you that rumors of the Walt Disney Company having a weather bubble around the resort just aren’t true. However, the summer showers pass quickly so they won’t ruin your whole day. Hurricane season occurs from June to November every year, but the chances of a storm directly hitting the area are low.

The humidity stays over 50% year-round and reaches the highest levels during the summer. This can be a drastic change for some people, so I recommend wearing cool and breathable fabrics.

You should see my full list of 49 Disney World tips, but here are 3 essential things to know if you are short on time:

Prepare for a Crowd

The crowds at the parks fluctuate based on the season, ticket prices, and many more factors, so there is always a chance for large crowds. Be mentally prepared for long wait times so it doesn’t ruin your Disney World trip.

👉 Read Next: My Top Things to Do in Central Florida

If you go to Disney World during the busiest times of the year, one perk is that the parks will have extended park hours. Take advantage of the early mornings and late nights when crowds are the thinnest. The late nights are one of the best times to visit the Star Wars attractions at Hollywood Studios.

You can reserve a Disney hotel room 499 days in advance, so that leaves plenty of time for planning. By doing your research early, you can book experiences and park tickets as soon as they become available. Waiting until the last minute often means that dining reservations are all taken and special events may be sold out.

If you want someone else to do the planning legwork for you, just follow one of my pre-planned Disney itineraries:

When is the best time to visit around the holidays?

How many days do you need to visit Disney World?

To see and do everything when you go to Disney World, spend 7 days at the resort. Use four days to visit one park per day. Use the remaining days to enjoy the pool at your resort, hang out at Disney Springs, visit one of the water parks, and go miniature golfing.

Is Disney World better than Disneyland?

Disney World is a larger resort with 30 hotels, 4 theme parks, 2 water parks, and Disney Springs. It offers more for families to experience during their vacation.

Which park is the least crowded?

The least-crowded park can vary from day to day based on the season and special events, but typically Animal Kingdom has the fewest visitors. Disney’s Animal Kingdom is the largest park, which helps the crowds to seem more spread out.

How far is Universal Orlando from Disney World?

Universal Orlando is approximately 20 minutes away from Disney World by car. Many local hotels will offer shuttle service to both Disney and Universal.

👉 Read Next: The Best Things to Do in the State of Florida

No matter when you go to Disney World, you are in for a magical trip. Now that you’ve narrowed down when to visit, you can continue the rest of your Disney vacation planning.

Katie Lusnia grew up in the Florida sunshine. Now she is on a mission to explore the state with her husband and infant son. She loves finding farm-to-table food and exploring an area through local cuisine and the great outdoors.