This is the time of year when pictures of Santorini, that iconic island in Greece, invade social media feeds across the world. The pictures might be of gorgeous white windmills high on a cliff overlooking the sea, or of Santorini’s famous cave houses lit up like lanterns at sunset. Or they might involve the posters themselves casually perched on a wall – melting into the island’s background in white and baby blue clothes they just happened to have packed. Call it “Santorini camouflage.”

The posts and pins might come from newlyweds gallivanting around Greece on their honeymoon, that kid next door who took a year off college to travel the world with a rucksack, or some travel blogger trying to convince you that Santorini is the most magical place on the planet.

But, whatever their content or source, these photos are really just meant to do one thing: make you insanely jealous that you aren’t in Santorini right now.

I just finished a trip to Santorini and, as someone who travels the world full time, I can tell you that Santorini is one of the most overpriced, overcrowded, and overrated travel destinations on the planet.

Santorini is famous its Instagram spots — especially at sunset. In fact, the most liked photo on my Instagram account is from Santorini. The simple truth is that Santorini is social media gold – guaranteed to up your like count.

But do you want to know what’s really going on behind the cameras over on Santorini?

Just check out this photo of tourists fighting — literally, people were shoving each other — to get a shot of the sunset: 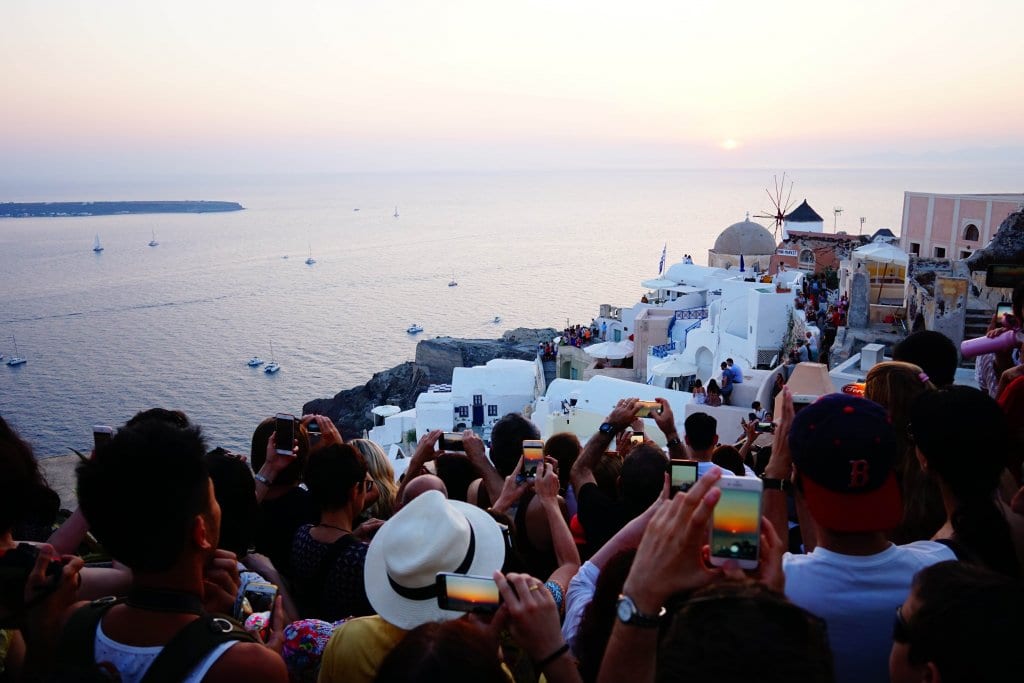 And you know what is really crazy about that picture? That is one of the LESS BUSY sunset viewpoints on Santorini. I couldn’t even make it to the more popular photo spots until much later because people were jammed in like sardines.

I wish I could say that Oia, the iconic white village on the island, is only crowded for sunset. But, at least during the summer, it is mobbed at all hours by cruise ship excursions, European glitterati, and Chinese tour buses. The narrow walkways get so crowded that at times getting around can make you feel like you’ve been conscripted into a sweaty mosh pit of humanity gyrating to Santorini’s siren song.

And for some reason, Santorini seems to bring out the worst impulses of its visitors. Everyone there is aware that Santorini pictures are guaranteed to perform on Instagram, so they’ll do just about anything to snap that jealousy-inducing pic.

The photo madness is so out of hand that the local school has to post these signs everywhere outside its playground, warning tourists not to take photos of the children:

Oh, and even forgetting the crowds, Santorini’s outrageous price tags are reason enough to give it a pass. This is definitely not a place for people looking to travel the world cheaply. Thanks to the influx of oil magnets mooring their yachts below the cliffs, one of those iconic cave houses in Oia — almost all of which are now converted tourist rentals — will run you over 500 euros per night. At one of Santorini’s many made-for-tourists restaurants, you can easily drop 50-100 euros on a Greek dinner that is about as authentic as Donald Trump’s tan.

While social media might have you think that Santorini is the only Greek game in town, in fact there are dozens of other photogenic islands worth the time and money you’ll save by skipping Santorini. Many of these are just as beautiful but far more authentic and affordable.

Examples of other cheap islands in Greece include Ios and Naxos, you can rent a white house overlooking a stunning seascape for a fraction of the cost you’d pay in Santorini. And on forgotten but charming Andros, you may be the only visitor in town.

In short, Santorini is to the Greek islands what Chobani is to Greek yogurt — superficially appealing, mass marketed, but entirely less satisfying than the real thing.

I’m sure I’ll catch some grief from Santorini defenders eager to protect the integrity of the many Instagram likes they so carefully curated on their overpriced Greek adventure. So let me concede a few caveats to the above.

First, I visited in June. Perhaps the island is more enjoyable in the less crowded months (though June itself is actually still shoulder season!) and so perhaps I missed the best time to visit this part of Europe.

Second, most of my criticisms are targeted at Oia because that’s the iconic social media shot that is subject of this article. Santorini itself is a big island and there are quieter locations to be found further afield, sure.

And, lastly, I’ll grant that Santorini is a beautiful island with some cool cliffs and decently blue water. Some people may find that Santorini makes the perfect romantic escape.

But guess what? There are a lot of other gorgeous places on this planet. To me, Santorini’s not THAT special. Sorry, not sorry.

Bottom line: while different people experience places differently and plenty of people do seem to really going to Santorini, it really didn’t fit well with me and I’ve heard from many others that I’m not alone.

So for those of you who are sitting at home filling with envy over those beautiful Santorini pics on social media, relax.

Trust me, you can die content without ever setting foot on Santorini.

The truth is that Santorini, for all its beauty, is overpriced, overcrowded, and overrated.

What do you think? Am I missing something? Tell me your thoughts in the comments!

And use this trick to download a free Lonely Planet Guidebook to Greece!