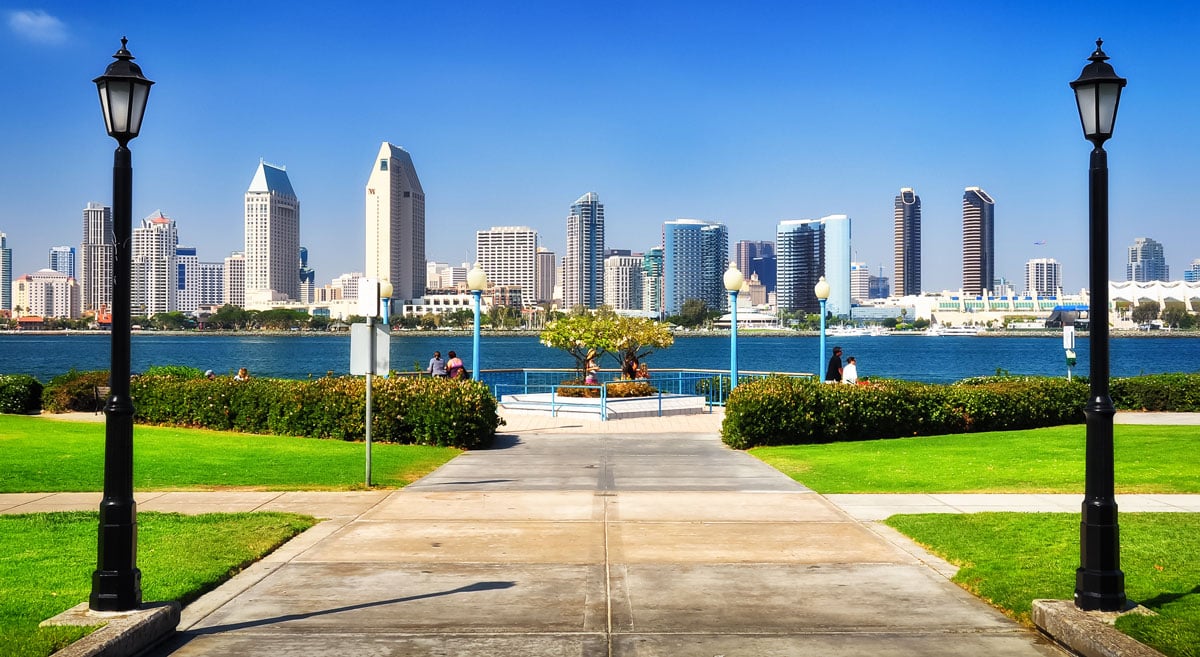 Receiving an average of 35.1 million visitors a year, San Diego is one of the United States’ top travel destinations. And for those of us lucky enough to call the city home, we live in the 26th happiest city in the country.

And with its gorgeous coastline, lively nightlife, awesome sights, and rich culture there’s no wonder why. But for both tourists and residents alike, the question of safety and security may still remain.

So is San Deigo safe for travel?

So let’s dive into the facts and stats to make sure your time in America’s Finest City is awesome and safe!

San Diego, California is one of the safest cities of its size in the United States. However, as with any large city, people should be cautious of areas of higher crime rates and take precautions, especially against the continued risks surrounding COVID-19.

Whether you’re visiting San Diego or considering a permanent relocation, chances are your first question will be “is San Diego safe?”

Being a large city, San Diego has some inherent risks. However, a majority of the city’s neighborhoods are peaceful, so staying safe and sound is a simple matter of identifying the more dangerous areas and taking some safety precautions that I’ll outline for you here!

Things to Know About Safety in San Diego

San Diego’s safest neighborhoods, and some of the best areas to stay in San Diego for travelers, tend to be the quaint residential areas in North County:

The most dangerous neighborhoods tend to be southeast of San Diego’s city center and include:

The good news is that if you’re worried about safety but aren’t willing to compromise on an urban feel, San Diego’s a great option because it’s rated one of the safest cities of its size in the U.S. For more information on San Diego’s best neighborhoods and areas for visitors, check out my article on where to stay in San Diego.

Like any densely packed, metropolitan area, San Diego poses some risks associated with the COVID-19 pandemic. People tend to go without masks in outdoor areas. however, many businesses still recommend masks indoors, and the county requires masks in certain places.

According to the San Diego Union Tribune, as of November 2021, 84% of San Diego residents over the age of 5 have received their first vaccine dose and the infection rate has dropped since summer. Because the weather stays decent through winter and many of its attractions are outdoors, San Diego is a good option for visiting if COVID is a concern.

Statistics indicate that San Diego’s crime rate is lower than the national average and is one of the safest large cities in the country. The most recent report from SANDAG describes San Diego as an overall low-risk city in terms of crime.

The overall crime rate (including violent crime and property crime such as motor vehicle theft, burglary, larceny, and arson) in San Diego is 0.2357 (23.57 in 1,000),  and your chances of being a victim of violent crime are only 1 in 267  (Neighborhood Scout).

And, while it’s always good to be aware of risks in your surroundings, it’s easy to avoid the areas where crimes tend to be greater. For tourists, I recommend purchasing World Nomads travel insurance for peace of mind.

Like all other large cities and tourist destinations, San Diego has its fair share of scams. But if you know what to look out for, these should be pretty easy to avoid.

California’s fires have put the state in the news often in recent years. Because of the lengthy droughts and dry foliage, fires start extremely easily and can spread uncontrollably so it’s important to follow the state’s strict guidelines. These include certain bonfire restrictions, a ban on fireworks, and taking extra care with cigarettes. You can find current fire reports here.

In addition to fires, California has infamous earthquakes periodically. There hasn’t been a super strong one in quite a while, but small ones do happen periodically. If you do experience an earthquake, it’s important not to panic. If you’re inside, take shelter under a table or desk, and if you’re outside, find an open area without buildings, trees, or streetlights that might fall.

San Diego’s beaches are some of the most beautiful in the country (see my guide on the best beaches in San Diego) and, along with the perfect weather, draw huge crowds each summer. And while enjoying the beach in America’s Finest City is a must, it’s always a good idea to be aware of ocean safety first.

Most beaches have lifeguards who can be relied upon if you get in a sticky situation or if an accident happens and you need medical attention. It’s best to avoid those situations, but just in case it’s a good idea to identify the closest lifeguard tower to you.

Rip currents are a real danger in the ocean and can pull you out to sea if you get stuck in one. A rip current could be present if you notice a difference in water color, a break in the wave pattern, or debris moving away from the shore. If you get stuck in a rip, swim parallel to the shore until you’re safely out of it and can swim into safety.

Ocean wildlife is also worth being aware of. And before your mind jumps to sharks, I mostly mean much smaller and less toothy creatures, like jellyfish and stingrays. While jellyfish are tough to avoid if present, you can avoid a much more painful stingray encounter by shuffling your feet in the sand as you enter the water which will scare any rays off.

San Diego has some spectacular hiking trails worth checking out, but be aware of the associated risks including dehydration, heatstroke, and rattlesnakes. It’s also good practice to go with a hiking partner in case of an accident or injury.

Tip #2 – “Know how to avoid and escape rip currents”

Rip currents are patches where the current flows away from the shore out to sea. These can be super dangerous to get stuck in because they can suck someone right out to open ocean and people can spend all of their energy fighting to swim back to shore and drown.

If you do get caught, above all else, don’t fight the current or panic. Follow these strategies for escaping rip currents.

Like any place, it’s best not to walk around San Diego at night. This is when the risk of falling victim to an act of violent crime can go up, so it’s always recommendable to walk in pairs after nightfall or take a bus, train, or rideshare if you don’t have a vehicle.

Tip #4 – “Apply sunscreen and be aware of heatstroke”

California is known for its perfect weather but the downside to consistent sunshine is sunburn. The sun is surprisingly strong here, even on cloudy days so be sure to apply your SPF. I also recommend taking care against heat stroke, especially in the hot dry weather during summer.

Read up on the seasons and weather in the city in my guide on when to visit San Diego.

This tip applies in San Diego as it applies everywhere else in the world. It’s important when out at the bars to keep track of your drink and avoid leaving it sitting around unattended. I have had both male and female friends report having something slipped into their drinks in San Diego bars, though thankfully nothing else happened in either case.

FAQs About Safety in San Diego

Is it safe to visit Tijuana, Mexico?

Due to its proximity to San Diego, visiting Tijuana is a common activity for San Diegans and visitors. While the city gets a bad wrap for supposedly high levels of criminal activities, it’s not as dangerous as you may think. Stick to the tourist areas, keep an eye on your belongings, and don’t wander around at night and you should be fine.

If you’re especially concerned, you can always take a guided tour or independently explore on of my favorite San Diego area day-trip ideas.

Are there hate crimes in San Diego?

There were 45 and 46 reported hate crimes in 2020 and 2021, respectively. The most common motivator for these crimes was identified as race, though the percentage of hate crimes based on race decreased in 2021 (2021 SANDAG Crime Report).

Is San Diego safe for a solo traveler?

The city is reportedly safe for all travelers, including female solo travelers! If you visit San Diego alone you’ll be plenty safe if you stick to the safer areas mentioned above and practice common sense when it comes to safety (i.e. avoid walking alone at night, locking up your vehicles, and keeping an eye on your things belongings).

Like most big cities, San Diego has its share of crime. However, I was born and raised in San Diego and have not once fallen victim to any myself.

So hopefully following these guidelines you’ll be able to safely and confidently explore this amazing city! For some ideas take a look at the 47 best things to do in San Diego.