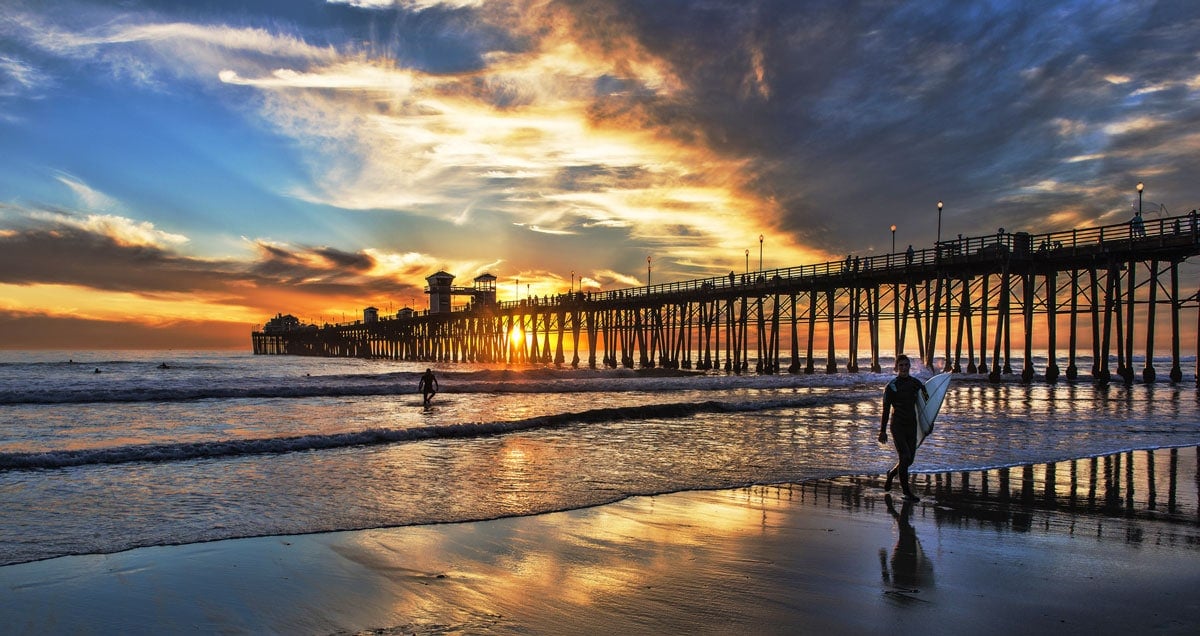 The best time to visit San Diego is during the summer months when you can take full advantage of the stunning beaches, which are the city’s most prominent attractions. Late summer, especially September, tends to boast the best weather, warmest ocean temperatures, and smaller crowds.

Most people come to San Diego for its beautiful beaches, and if enjoying the water, sand, and sun is your priority, you’ll want to plan your visit for the summertime. But be warned… I’m a local and can assure you that not all summer months are made equal in America’s Finest City.

Plus, even though San Diego is known for the ocean and sunshine, it has plenty more fun activities to offer and is worth visiting during less busy, but no less beautiful, times of the year.

When is the Best Time to Visit San Diego?

While San Diego is undoubtedly a summer destination, the summer months tend to be the most crowded and expensive of the year. And the city remains beautiful and rich in activities even into fall and winter.

So there are certainly plenty of factors that determine the best time to go to San Diego, but I’m here to talk you through the decision-making process!

👉 Read Next: Where to Stay in San Diego (Best Areas & Neighborhoods)

When to Visit San Diego to Avoid Crowds

San Diego receives the majority of its visitors between June and August. During this season, crowds of summer tourists flock to the beach and the surrounding areas.

There is, however, a simple way to enjoy the summer weather while still avoiding the summer crowds… plan your visit for after Labor Day Weekend. In my opinion, September is the best month to visit San Diego.

Sometimes it’s almost eerie how quiet the city suddenly becomes, especially in the busiest places such as Mission Beach or Pacific Beach, after peak season ends. And while the crowds have gone, the warm summer-like San Diego weather usually lingers into the beginning of October.

San Diego’s low season is during late fall and winter, so if you’re dedicated to avoiding the crowds and don’t mind spending more time indoors, you’re best off visiting during the cooler months.

When to Visit San Diego for the Best Weather

I’ve lost count of the number of times that friends have come to visit me in June and early July expecting 75 degree sunny days, only to be disappointed by cool breezes and grey skies. This typical phenomenon is not-so-affectionately known as “June gloom” and this gloomy local forecast typically gives way to good weather in July.

While “best weather” depends on the person and the activity, the weather in September in San Diego is debatably the best of the year. The days are warm and sunny with low humidity and the evenings are pleasantly cool.

When to Visit San Diego for the Best Activities

San Diego’s outdoor and water-based activities such as surfing, boating, and snorkeling are best enjoyed during the warm summer and early fall months. To avoid the crowds, I recommend September when San Diego weather is warm but most tourists have left.

And if you want to hike, there are some awesome trails east of the city that are unbearably hot during summer but are absolutely gorgeous during fall and spring.

San Diego also has a bunch of seasonal events throughout the year that I’ll dive into in the following section.

When to Visit San Diego for Families

Fall is the best time to travel to San Diego for families, as the weather is pleasant enough to enjoy a beach day, but cooling off enough to enjoy kid-friendly attractions like the zoo and Legoland.

Also, in October, San Diego celebrates Kids Free San Diego, and for the whole month many venues, including theme parks, museums, restaurants, and tours allow kids to participate for free.

Early fall in the city still flaunts warm weather and allows locals and late-season tourists to enjoy the many San Diego beaches. As the season progresses, the days and evenings cool down and mild San Diego weather sets in, allowing you to explore San Diego County further than just the beaches. It’s a great time to explore some of my favorite Southern California day trips from San Diego.

Autumn is also the best time to visit San Diego for events and activities, including music events, an art and wine festival, and sports games.

Despite its reputation for having year-round warm weather, San Diego’s climate can get quite cool on winter nights, reaching lows of 51ºF.

If you’re wanting the typical San Diego beach and ocean experience, then you should avoid the winter months as they are cold and damp and ocean temperatures drop drastically. Surfers, however, celebrate the big Winter swells and great surf.

And, while there’s less to do in San Diego in winter, it’s a great time to take advantage of the city’s awesome indoor attractions, such as museums, as crowds will be minimal. If you don’t mind the cooler temperatures, then you’ll benefit from visiting in the winter low season as hotel prices tend to be lower.

Spring in San Diego tends to see temperatures rise but also cloudy skies (San Diego is the prototype for April showers, May grey, and June gloom). But the dreary skies are counteracted by the colorful blooms that peak out during the San Diego springtime.

And, while the beach may not be calling, spring is the best time to explore the deserts of eastern San Diego County, which receives pleasant weather earlier than the beach towns.

👉 Pro Tip: Spring is a great time to explore the deserts and attractions of eastern San Diego, such as wine country in Temecula. Check out popular tours here.

Summer is, of course, the ideal and most popular time to visit San Diego. If you’re in search of high temperatures and sunshine, I suggest avoiding early summer, however, as the overcast spring lingers throughout June.

Enjoying the beach is the obvious summer activity in San Diego (check out my article 21 best beaches in San Diego). And besides enjoying the beach, there are tons of other fun events and activities including live music, sporting events, and family-friendly events.

Weather and Climate in San Diego

San Diego is chaparral, or coastal desert, and has a Mediterranean-like climate and landscape. The city is known for its great weather, which is generally warm and mild year-round, especially on the coast. Further inland, however, San Diego weather can be more extreme and is worth avoiding during the summer months.

Spring and early summer tend to be cloudy and cool, keeping people anxiously awaiting the true Summer sunshine and beach weather until well into July. Summer hangs on late, well into September, and October often brings Santa Ana winds that, blow hot, dry air from the desert in the east towards coastal Southern California.

While it’s more consistently pleasant to enjoy the beach during the summer months, the water is bearable year-round if you wear a wetsuit (or you have a high tolerance to cold)!

You’ll often see tourists, probably visiting from freezing areas, splashing around in the waves sans wetsuit even in winter. Ocean temperatures range from an average of 57ºF in winter to 68ºF in Summer.

San Diego can have some unpredictable temperature shifts both throughout the day and from one day to the next. Especially during fall and spring, mornings and evenings are cool but temperatures get warm come mid-day. And in winter will often see random sunny days that reach up to 65ºF.

Avoid the Ocean After Big Rains

You’ll want to stay out of the ocean for a few days after a big rain. Since big storms are few and far between in San Diego, those that do occur bring runoff from the land into the water which can cause irritation.

👉 Read Next: Is It Safe to Travel to San Diego Right Now?

FAQs About When to Visit San Diego

What are the hottest months in San Diego?

The hottest months in San Diego are August and September, with average temperatures reaching a high of 78ºF and a low of 67ºF. These months a great for enjoying the beach, as ocean temperatures are also at their most comfortable. Avoid east county San Diego during these months if possible, as it can get uncomfortably hot and dry.

What is the rainy season in San Diego?

Southern California in general, is known for being dry and suffering consistent droughts, but San Diego’s rainy season is in the winter, with January typically receiving the greatest rainfall, with an average of 2.28 inches annually. The rains are typically light and pass by quickly.

What is the High Season in San Diego

The most popular season in San Diego is during summer when tourists come to enjoy the sunshine and refreshing beaches that the city is famous for. The summer high season usually kicks off on Memorial Day Weekend and lasts until Labor Day Weekend, which is when hotel room rates are at their highest and the tourist attractions can be overwhelming.

How many days do you need in San Diego?

I recommend a minimum of three days in San Diego to get a good sense of all that the city has to offer. There are plenty of attractions to explore in the city, however, and you could easily fill a full week with sightseeing and activities.

👉 Wait, Before You Go … Be sure to bookmark my epic article on the 47 Top Things to Do in San Diego!

Planning a trip can be difficult, and deciding on when to visit can be one of the toughest you’ll make. So hopefully this information has given you some clarity as to the best time to visit San Diego to get the best experience from your visit. Hope to see you here soon!