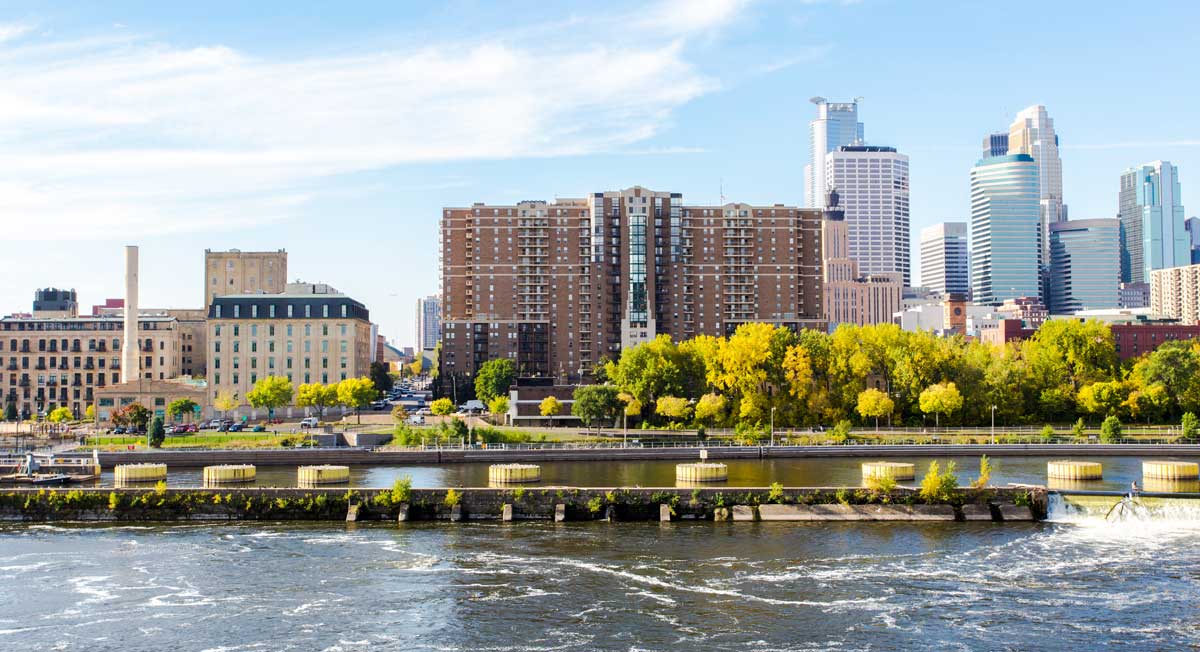 With Minneapolis’s historical sites and lively nightlife, it’s no wonder that the city draws around 30 million visitors a year. However, every city poses safety concerns and Minneapolis is no different.

Between crime and the ongoing public health crisis, both tourists and prospective residents may be wondering how safe it is to visit or live in Minneapolis.

Well, I’m here to give you some tips about how to stay safe in Minneapolis, so you can enjoy your time in this lovely Midwest city!

Minneapolis is a fairly safe city to visit and live in. It has similar crime rates to other American cities, so you should take any safety precautions that you normally would. Travelers should also be aware of risks concerning the ongoing COVID-19 pandemic.

Since Minneapolis is a large city, some crime is to be expected. But the tourist areas – where you’ll find most of the popular things to do in Minneapolis – are generally safe. Tourists should mostly be on the lookout for petty crime, like pickpocketing and bicycle theft. Also, some areas should be avoided, and it’s always safer to avoid walking alone at night.

Additionally, a big safety concern that isn’t related to crime is winter weather. Minneapolis gets very cold and windy, with snow and ice on the roads and sidewalks. This can make driving more dangerous than normal, so it might be best to avoid visiting the city in the winter unless you want to do winter activities like skiing.

Although there are some safety concerns, as long as you keep in mind the precautions I’ve outlined here and avoid dangerous areas, you can be confident about staying safe in Minneapolis.

Things to Know About Safety in Minneapolis

Safe Neighborhoods and Areas in Minneapolis

Although most neighborhoods near the best things to do in Minneapolis are generally safe to stay in, the safest neighborhoods would be outside of the downtown area where it’s less densely populated. Some safe areas and suburbs include:

The most dangerous neighborhoods tend to be in or near central Minneapolis and include:

Similar to other cities in the U.S., Minneapolis continues to experience impacts from the COVID-19 pandemic, so visiting the city can pose some risks. The Minnesota Department of Health recommends wearing a face mask, especially for those who are not vaccinated. Some businesses require masks indoors and will note that with a sign on their door.

Be sure to check the latest covid statistics for Minneapolis before your visit, as they can change quickly.

According to CrimeGrade, the rate of crime in Minneapolis is about the same as the average city in the U.S. It is safer than 48% of other American cities and the average annual crime rate is 27.37 per 1,000 people.

However, Minneapolis has a lower violent crime rate and is safer than 58% of other cities in the U.S., whereas the city’s property crime rate is slightly higher than other cities. Crime is generally higher in the central parts of Minneapolis and safer in the southwest areas.

Like in other cities, travelers should take proper precautions to avoid becoming a victim of a scam. Staying aware of your surroundings and keeping your belongings secure will help you stay safe. However, for added peace of mind for your trip to Minneapolis, I recommend getting World Nomads travel insurance.

Knowing what kinds of scams and crimes are common can also help protect you. Some common ones in Minneapolis include:

Minneapolis doesn’t experience many natural disasters like hurricanes or earthquakes, but the biggest concern is winter weather. From November to April, you can expect it to be chilly, especially from December to February. January is the coldest month and has an average low of 10°F, but there will be days that are in the negatives.

The main thing to look out for in the winter weather forecast is the wind speed. Not only does it get very cold, but also very windy, and this will make some days feel even colder than the temperature indicates.

Additionally, if you plan on renting a car while visiting in the winter, the roads can be icy. Try to avoid driving while it’s snowing or right after fresh snowfall. Once the roads have been plowed and salted, driving will be safer. You may also want to look into getting winter tires, which will make it easier and safer to drive on snowy and icy roads.

According to the Minneapolis Health Department, the tap water in Minneapolis is safe to drink. Plus, it’s a more economical choice than buying bottled water which can save you some money. For travelers, I recommend packing a water bottle and filling it up with tap water when you arrive. And if you’ll be flying, make sure the bottle is empty before going through airport security!

Tip #1 – Consider Visiting in the Spring, Summer or Fall

Unless you want to do specific winter activities like skiing, lake ice skating, etc, the best time to visit Minneapolis would be outside of the winter season. During the winter, Minneapolis has cold, windy weather, snow, and icy roads, so it can be hazardous for driving, especially for those who aren’t as familiar with driving in such conditions.

If you do visit in the winter, make sure you pack plenty of layers and a warm jacket. Also, try to avoid driving if you aren’t used to driving on winter roads, and if you must drive, make sure to go slow, especially if there’s fresh snowfall.

If you get lost in Minneapolis or you’re being bothered by someone, the best thing to do is reach out to someone nearby if possible. People in the city are generally friendly and would be willing to help you if you need it.

Minneapolis is about as safe as the average U.S. city, so you should take any safety measures that you normally would anywhere else. Keep an eye on your belongings at all times, don’t show or count your cash out in the open, and stick to well-trafficked and well-lit areas if walking around at night.

Tip #4 – Keep Track of Your Drink at Bars

Minneapolis has great nightlife and plenty of bars to keep you entertained at night. But just like in other places, make sure you keep track of your drink at bars and don’t leave it unattended to avoid having something slipped in your drink. Also, don’t accept drinks from strangers and if someone wants to buy you a drink, have it freshly made by the bartender instead.

This is especially important for solo female travelers but goes for anyone. If you plan on being out in the city late at night, try to avoid alleys, dark areas, or places without many people. Also, avoid walking at night in general if you can. It would be better to call a taxi or rideshare service to take you where you need to go than to walk at night.

How dangerous is Minneapolis?

Minneapolis is generally as safe as the average city in America. It has a crime rate that is a little higher than the national average. In addition, tourist attractions tend to be safer than other areas so you should be safe if you stick to those areas, but be wary of pickpockets.

Where should I avoid in Minneapolis?

Although the southwest area of Minneapolis is the safest, there aren’t as many tourist attractions there, so it may not be a convenient place to stay for travelers. Central Minneapolis is generally safe and convenient. Some nearby neighborhoods like Hawthorne, East Phillips, and Ventura Village have much higher crime rates than the other areas, so you may want to avoid these neighborhoods.

Minneapolis is a safe city for solo female travelers, but they should still take precautions like they would anywhere else. Booking accommodation that’s in a busy area and avoiding walking alone at night can help keep you safe.

That’s it for my guide on safety in Minneapolis!

Hopefully, it gave you a better idea of what you can expect when you visit Minneapolis and how to stay safe. And if you’re excited about visiting the city but not sure what you want to do yet, check out my guide on the 33 best things to do in Minneapolis.

Jessica Hurtault is a freelance writer in Minnesota. She explored South Korea while teaching English there for three years and traveled around Europe and Asia during her vacations. Now that she’s back in the U.S., she’s dedicated to finding the best sunrise spots and vegetarian restaurants on this side of the world.