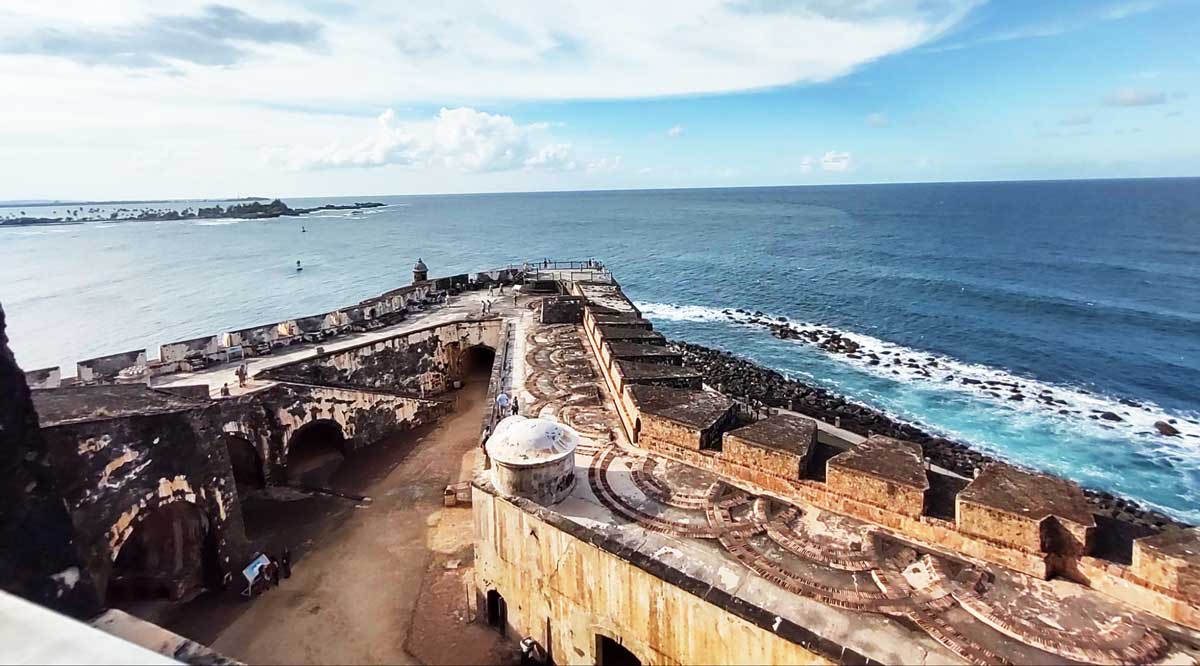 With more than 400 years of history, El Morro features an impressive history of battles, and it’s a favorite site to explore in Puerto Rico, for everyone from tourists to Puerto Rican families and locals like myself.

The San Felipe del Morro Castle is a citadel in Old San Juan built under the Spanish Empire. The fort is open to the public from 9:00 am – 4:30 pm daily and the entrance cost is $10. Inside visitors will find troop quarters, prison cells, garitas, and exhibits that showcase the history of the structure that protected the bay for more than four centuries.

In this post, I will go over everything you need to know before visiting El Morro, starting with a short history lesson:

The Arrival of the Spanish Empire

Christopher Columbus arrived in Puerto Rico in 1493 and claimed it as a territory of Spain. For its prime location and its resources, Puerto Rico quickly caught the attention of multiple powerful countries.

The capital city moved from Caparra to Old San Juan in 1521. Due to constant attacks, the building of different fortifications like La Fortaleza, the current governor’s mansion, began. The lack of San Juan’s defenses gave path to the construction of the original tower of the San Felipe del Morro Fort in 1539.

👉 New to San Juan? Don’t miss my list of the best things to do and see in San Juan.

⚓1595 – Sir Francis Drake, a famous English privateer, loses the Battle of San Juan harbor after burning the Spanish ships on the port.

⚓1598 – George Clifford leads an English attack, entering Old San Juan through land and taking over Castillo San Felipe del Morro for 65 days, giving up after most of his troops got sick with dysentery.

⚓1634 – Boudewijn Hendricksz leads Dutch troops to invade Old San Juan but fails to take over El Morro and retires. That same year, the construction of the city walls began with the goal of making Old San Juan a complete walled city.

⚓1797 – British General Ralph Abercromby and Admiral Henry Harvey invade Puerto Rico as a result of the Anglo-Spanish War. After an intense battle of 7 days, the British abandoned the island.

👉 Are you an adventure seeker? Read now about the other fun activities you can do in Puerto Rico.

Although El Morro wouldn’t actively participate in a battle again, the fort continued to serve as a military base for the United States under the name of Fort Brooke. An additional bunker got created on top of Castillo San Felipe del Morro during World War II and in 1908 the lighthouse got remodeled.

In 1961 the United States armed forces moved out from El Morro and the whole fortress became part of the National Park Service. Later in 1983, the United Nations declared Castillo San Felipe del Morro along with the walls of San Juan a UNESCO World Heritage Site.

How to Get to El Morro

🚗 Drive – Drive into Old San Juan through Avenida Luis Muñoz Rivera and park your car either on the street or one of the private parking lots. The Ballajá Parking Garage is the closest parking lot to the fort. Read this post to learn more about driving in Puerto Rico.

🚌 Public Transportation – If you’re coming from the airport you can take the D53 or T5 AMA to reach Old San Juan.

🚕 Taxi – A taxi from the airport to Old San Juan has a fixed rate of $23, but some additional charges per luggage may apply.

📚 Related Reading: How to Get Around in Puerto Rico

🎟️ Entrance – $10 per person. People younger than 15 get in free. The entrance fee also covers the entrance to Castillo San Cristóbal, another fort in San Juan.

💵 Payment Method – You have to pay with a card as they don’t accept cash right at the entrance of El Morro.

♿ Accessibility – There isn’t parking right outside El Morro, so you can’t reach the fortress directly by car. The entrance to the fortress is paved and of easy access for wheelchairs. If you need to, you can make further arrangements to visit by calling 787-729-6777.

😷 COVID 19 Regulations – You need to use a mask inside the fortress regardless of your vaccination status. You won’t need to present your vaccine card.

🧑🏻‍🤝‍🧑🏻 Tours – At the moment, the park isn’t offering guided tours with a park ranger but you can check the NPS social media page to learn about upcoming events.

What to Expect Inside El Morro

At the entrance, you will reach the paying booth, where park rangers will greet you, charge your entrance fee, and provide a free map. From there you can choose to do a self guided tour or buy an audio guide to get through the park.

👉Want to visit more amazing places? Check my list of the top places to see in Puerto Rico.

This is where you’ll enter San Felipe del Morro and it’s the fifth level of the fortress. You will find exhibits, a bookstore, a chapel, a kitchen, prison cells, and bathrooms with a spectacular view.

📍 Don’t miss: The garitas, small turrets from where sentinels watched the bay.

The lighthouse is on the sixth level of El Morro and you can access it through ramps on both sides of the plaza. You cannot enter the lighthouse itself, but you can tour the complete sixth level of the fortress where you’ll get fantastic views of San Juan harbor, and the landward side where you can appreciate Fort San Cristóbal.

📍 Don’t miss: The three flags on top of the fort. One of them was the flag used by the Spanish Empire.

Located on the fourth level, the main firing battery is home to ports for Spanish canons, a platform used for canyons during World War II by the Americans, garitas, canyons, and a latrine. To get to this level you can use two different stairs, the main stairs with 77 steps from the plaza.

📍 Don’t miss: The spiral and triangular staircases the soldiers used to get between floors.

Troop Quarters and the Kitchen

From the fourth level, you can take the stairs down to the third level, where you’ll find the troop quarters, a second plaza, and a kitchen. From this floor, you can also access the second level of the fort.

👉 Local Tip: Staying in San Juan is great, but you shouldn’t miss the opportunity to visit other great parts of the island. Read my complete list of fun day trips near San Juan so you know where to go.

📍 Don’t miss: The piece of a canyon ball on the roof, from one of the attacks made to the fortress.

You’ll spend around two hours in El Morro, and most of that time you will be under the sun. Make sure to wear sunblock and additional coverage like a hat and sunglasses to avoid getting a sunburn. Read about more things to pack for Puerto Rico in this packing guide.

Visit in the Morning

While the Morro is open from early morning up to the afternoon, visiting early in the morning will be more pleasant and will save you the hot hours’ fatigue.

With all the walking under the sun, it’s easy to get dehydrated. While there is a shop inside El Morro where you can buy refreshments, you can save money by bringing your own reusable bottle of water since there are water fountains next to the bathrooms.

El Morro is bigger than what it seems on the exterior. You will be walking, climbing stairs and ramps for at least an hour. If you wear sandals not only you’re risking getting hurt, but also falling. Make sure to wear comfortable shoes that help you enjoy your visit.

You can enjoy El Morro at its best on a sunny day. Exploring the fort during a rainy day without getting wet is close to impossible, plus the ramps and stairs turn dangerous. For a better experience, check the weather with anticipation.

Leave Heavy Luggage at the Hotel

If you’re visiting El Morro fortress after checking out, try to make the arrangements to store your luggage at your hotel even if you have to pay extra. I’ve seen tourists carrying heavy suitcases and backpacks through the fort risking their safety and ruining their own experience.

What does El Morro mean in Puerto Rico?

El Morro is one of Puerto Rico’s most important landmarks, for being one of the oldest standing structures left by the Spanish Empire in San Juan and Puerto Rico. San Felipe del Morro is also a national symbol of Puerto Ricans’ identity.

Why is El Morro important?

El Morro was an important citadel that defended San Juan from incoming sea attacks during the Spanish Empire’s stay in Puerto Rico, and it was a strategic military defense of the Atlantic Ocean and the Caribbean region. The structure is almost 500 years old.

El Morro was mainly built by artisans, stonecutters, smiths, and slaves, and prisoners. Although some Spaniards contributed to the building of El Morro, they got paid for their labor.

What is El Morro named after?

El Morro’s complete name is San Felipe del Morro and is named after King Phillip II of Spain, since Puerto Rico was under the control of the Spanish Empire during its construction.

San Felipe del Morro was attacked by the English, the Dutch, the British, and finally by the Americans in 1898. Sir Francis Drake, a famous privateer, also attacked the island in 1595.

When was El Morro used?

San Felipe del Morro was used from 1539 to 1961, when the United States armed forces abandoned it, becoming part of the National Park Service up to today.

Now you know everything you need to visit Castillo San Felipe del Morro on your own.

If you’re wondering what else you could do in the city, check out my local list of fun activities to do in San Juan.