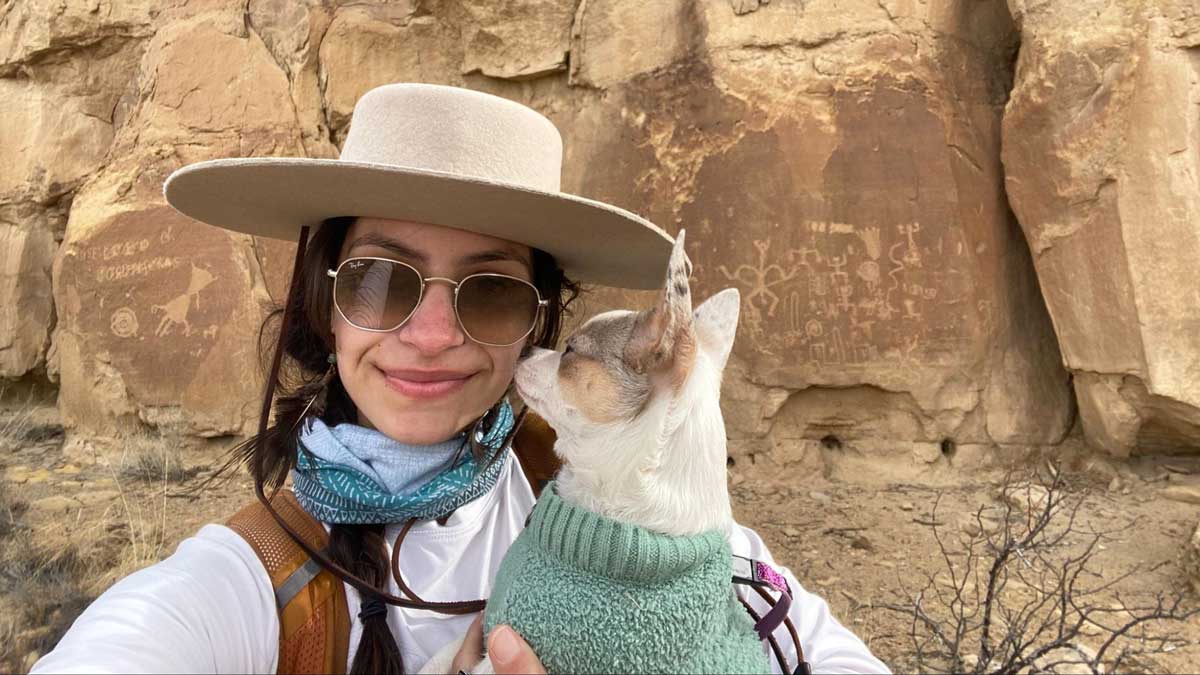 Chaco Culture National Historical Park, which contains Chaco Canyon, is one of the most impressive national parks in the United States. Not only does it inhabit 34,000 acres of protected wilderness, but it also houses 4,000 archaeological sites and is an International Dark Sky Park.

I’ve explored most national parks in the U.S. and Chaco Canyon comes out on top as my absolute favorite. Because the park is so far north in New Mexico and has no cell service, I’m here to help you plan your trip to a T.

Before we get started, be sure to bookmark our top national parks in Colorado guide, some of which are only a few hours from the Chaco Canyon area.

Chaco Culture National Historical Park was established in 1907 as a way to protect the grand archaeological features of the park, such as the great houses. It was named a UNESCO World Heritage Site in 1987 to recognize the incredible architectural and engineering achievements of the Chacoan people.

The architecture was constructed from the 9th to the 12th century and the site was once the center of social, political, and architectural sophistication, all present in the superb structures.

Chaco Canyon may be off the “beaten path,” but it is well worth the journey. It’s far less visited than other New Mexico national parks and therefore retains some of its natural, prehistoric mystique, making it a top place to travel.

The archaeological features of Chaco are quite impressive, but so is the scenic valley in which the site is located. It sits in a high desert canyon with little annual rainfall, little to no shade, and high summer temperatures in the 100-degrees with the occasional surprise monsoon.

The geology of Chaco Canyon in the San Juan Basin was formed 75 to 80 million years ago, with many marine fossils, like shrimp burrows, found atop its buttes and mesas.

A Machu Picchu of the Southwestern U.S., Chaco Canyon was an epicenter for trade among several different Ancestral Puebloan groups like the modern-day Hopi and Navajo.

Pueblo Bonito is the most visited site at Chaco Canyon; the biggest complex at the site. Over 50,000 pieces of turquoise were found in a single room in Pueblo Bonito, which is more than was found in all other archaeological sites in the American Southwest combined.

Besides the incredible archaeological remains of the Chaco site, the towering mesas and red sandstone walls surrounding the site are other top reasons to visit this national monument.

How to Visit Chaco Canyon

How to Get to Chaco Culture National Historical Park

The biggest concern with traveling to Chaco Canyon National Monument is the road leading into the site. You must drive 13 miles on a dirt road that can take cautious travelers up to 2 hours to complete.

I visited Chaco Canyon in a 22-foot motorhome and the dirt road took me 1.5 hours. While it’s wise to take it slow to avoid a flat tire, you should have no problem in a high-clearance vehicle.

The most popular route into the park is from Santa Fe, a 3-hour adventure. Take the US-550 North to Indian Service Route 7900, followed by County Road 7950, wherein the dirt road begins.

Try to avoid visiting the park during bouts of wet weather unless you have 4WD because the road may be impassible at this time.

🚗 Need a Rental? You can rent a 4WD vehicle in New Mexico with Discover Cars.

🎟️ Entrance – $25 per vehicle, good for 7 days. Purchase tickets at the visitor center upon entry. The entrance is free with an America the Beautiful national parks pass.

📝 Reservations – No reservation is needed for day-use park entrances. Same-day campsite reservations can be made at the visitor center although it is recommended to reserve ahead of time, especially in the summer, to secure a spot. This can be done via Recreation.gov.

Things to Do in Chaco Canyon

There is so much to do in Chaco Culture National Historical Park. Hike to the top of a mesa overlooking major archaeological sites, take a scenic loop drive through prime desert landscape, camp next to ancient petroglyphs, and scout the open terrain for native wildlife.

🏜️ Pueblo Alto Trail – I cannot imagine visiting Chaco without hiking the Pueblo Alto trail. This is the best trail in the park in my opinion and takes hikers to an aerial viewpoint of both the Pueblo Bonito and Chetro Ketl ruins.

This magical, 5.1-mile trail also winds past the hilltop Pueblo Alto ruins site, one of the lesser-visited but incredibly scenic sites with shattered pottery dispersed throughout the whole area. In addition, the trail winds past the Jackson Stairway feature and follows some of the original alignment of the 400 miles of Chaco roads.

👉 Pro Tip: You can opt for a shorter hike to only the Pueblo Bonito Overlook, a 2-mile round trip endeavor.

🌙 Peñasco Blanco Trail – This is the longest backcountry hike in the park but can be divided into shorter sections. Starting at the same trailhead as the Pueblo Alto Trail, the Pueblo del Arroyo parking lot, this trail is 7.2 miles roundtrip past petroglyphs, through the wash, and finally to the Peñasco Blanco ruins.

If you don’t have time for such a long hike, you can opt to hike only the 4-mile Petroglyph Trail from the same trailhead. Be sure to bring your binoculars because some ancient rock art is more than 30 feet high.

Pueblo Bonito, Chetro Ketl, Pueblo del Arroyo, and the San Juan Basin are all visible while ascending on the South Mesa Trail. This is the perfect hike for individuals who prefer short hikes.

🏚️ Wijiji Trail – The last of the backcountry hiking trails, the Wijiji Trail is only 3 miles roundtrip and takes hikers past remains of Navajo communities and wagon roads from the mid-1700s.

The Wijiji ruins contain 225 uniformly sized rooms, the most precise symmetry of all great houses in the national park.

This trail is accessed 1.25 miles east of the visitor center or you can catch an extended trailhead from the Gallo Campground.

🖌️ Una Vida – This trail isn’t considered a backcountry trail, so no pets are allowed on this one. This 1-mile hike is the perfect trek for the whole family, although it does have a slight incline.

The Una Vida trail begins at the visitor center and is the best way to view petroglyphs in the national park. There are also small ruins at this site but the rock panel of ancient art is the biggest draw to the Una Vida hike.

The only way to access the top sites at Chaco is via the scenic Loop Road. There are 5 stops along this one-way road and parking lots with restrooms at each trailhead.

There are two scenic stops on the way back to the visitor center: Casa Rinconada and a historic Staircase stop. Take your time while cruising around the park and be sure to look under the wash bridge to find a flowing stream, depending on the season.

There is only one official campsite in Chaco Canyon National Monument, Gallo Campsite. This is one of the coolest national park campsites I’ve stayed in because it had ruins and petroglyphs within walking distance of the campsites.

Campfires are allowed in this campground, a major plus on cold winter nights. There are dumpsters, a group fire ring, two group campgrounds, space for RVs under 35 feet, a free dump station, and potable water.

It costs $20 per night or $10 with a national park pass and is open year-round. You can reserve a campsite on Recreation.gov or do a walk-up reservation at the visitor center. Be sure to bring all the camping essentials because there are no stores inside the park.

👉 Pro Tip: All of the water spigots are turned off during the winter because they freeze. Ask an official national park service ranger about the residential-only spigot and they will be happy to help you fill up your rig!

Chaco Canyon is located in northwestern New Mexico with no major cities around. This national park is an official International Dark Sky Park with 99% of the park a natural darkness zone.

In other words, Chaco Culture National Historical Park has killer views of night-time astronomy. The park also hosts night sky programs for communal stargazing with the rangers at the Chaco Observatory.

Chaco Canyon New Mexico is a prime wilderness area for wildlife to thrive. Some of the fauna in the park include elk, mule deer, coyotes, mountain lions, American badgers, gray wolves, and bats among others.

Wildlife can best be spotted on the backcountry hiking trails and sometimes even wandering around the great houses. These trails usually have high vantage points where you can see the whole valley below. With a good pair of binoculars, you may just luck out.

Where to Stay in Chaco Canyon

I recommend spending at least one night at Gallo Campground so you can experience all the glory of the surrounding Chaco area. Some of the best options for staying outside of town include:

Here’s some more helpful information on where to stay in Albuquerque.

There are few informational plaques at the Chacoan sites so you will want to purchase a guidebook for helpful information about the history, archaeological sites, and hikes for the best Chacoan Culture experience.

Chaco Culture National Historic Park regularly experiences temperatures above 90 degrees in the summer. Even when I visited in the winter, temperatures were hot under the direct sun. Always carry enough water to prevent dehydration while exploring this desert park.

Visit During the Off-Season

Winter deters many national park visitors and is the prime time to visit Chaco Culture Historic Park to avoid crowds. Night temperatures will be freezing at this time but the hiking trails will be empty, a good trade-off in my opinion.

Be Prepared to Hike

Almost every site requires at least a small hike to get to. Be sure to wear your most comfortable hiking shoes when visiting this national park.

Keep Your Distance From Wildlife

What happened at Chaco Canyon?

Chaco was the center for trade enterprises from 850-1250 CE but has since been abandoned due to drought and other unknown reasons.

Why is Chaco Canyon sacred?

Pueblo indigenous peoples have inhabited Chaco Canyon for thousands of years. It was once a huge ceremonial center that connected different people from different locations.

How many days do you need in Chaco Canyon?

2-3 days is recommended when visiting Chaco Canyon. This gives you enough time to see all the ruins via the Loop Road and hike different trails around the park.

Can you drive through Chaco Canyon?

You can drive through Chaco Canyon via the Loop Road, the only road in the park.

Now you’re ready to hit the road and explore one of the greatest national parks in New Mexico, Chaco Canyon! While you’re in the area, check out the top things to do in Santa Fe for a cool overall New Mexico experience.

McKenna Mobley is an avid adventurer, traveler, mountaineer, and writer from Southern California. Her goal is to climb some of the world's highest mountains and visit as many countries as she can. She loves Latin America and has been to almost every Latin country. She also has a thirst for solo adventuring and has hiked 400 consecutive miles by herself through the Arizona desert.