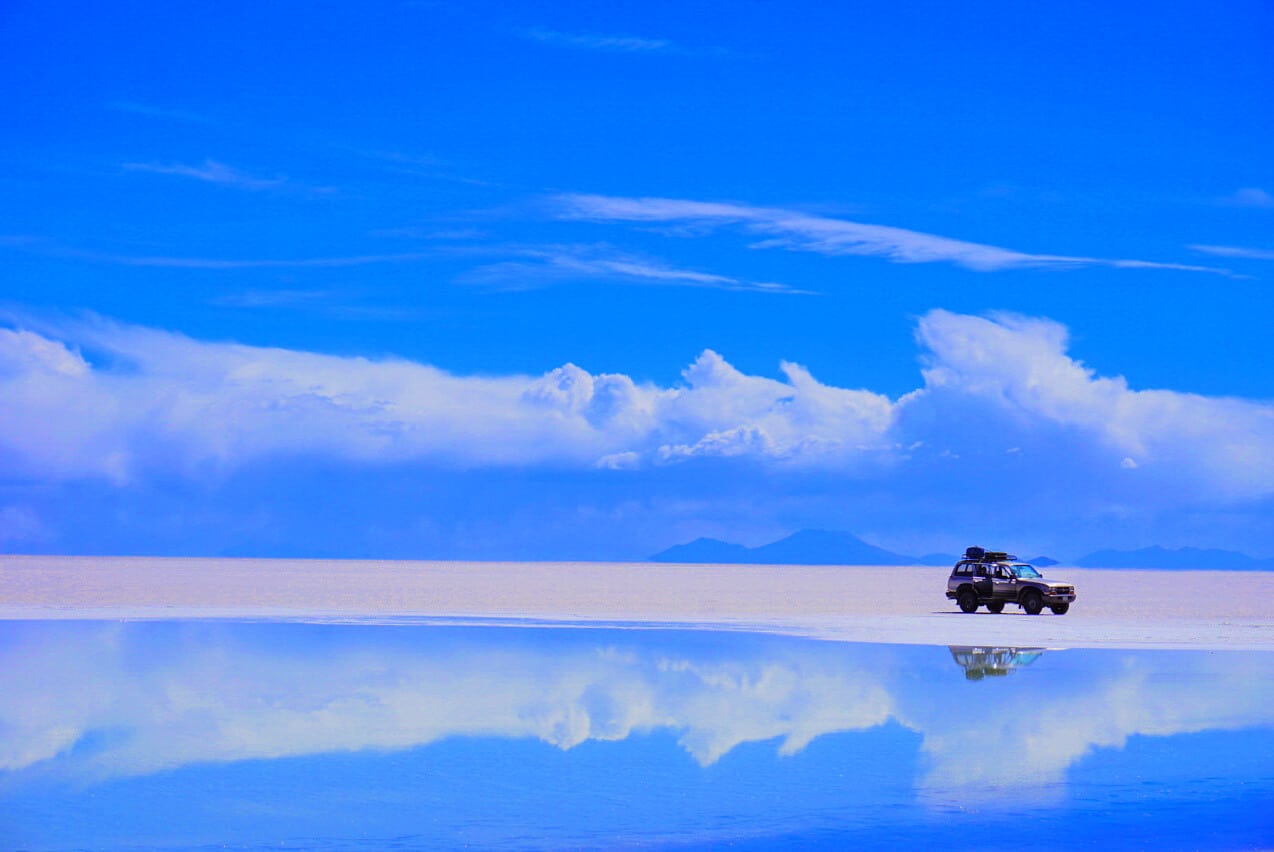 One of the most epic travel experiences I’ve ever had was taking a tour of the Salar de Uyuni in Bolivia.

Despite getting trapped by protesters before I could even begin the tour, it’s still one of my favorite travel memories to this day.

There are just so many gorgeous things to see on a tour of Bolivia’s Salar de Uyuni.

And it’s not just the famous salt flats: the typical Uyuni tour lasts three days and only one of them is spent on the iconic salt flats. The rest is spent a ton of other nearby natural sites that are equally out of this world.

But, in the meantime, here’s 19 of my favorite Salar de Uyuni pictures to inspire your wanderlust:

The flats are covered with these naturally occurring hexagonal formations made by the salt crystals:

At night, the flats become one of the coolest places on the planet for seeing the Milky Way:

And in the wet months of the year, the salt flats can turn into the world’s largest mirror, making it hard to distinguish up from down. I visited just before this time of the year, but still was able to get a taste for what the salt flat mirror looks like: 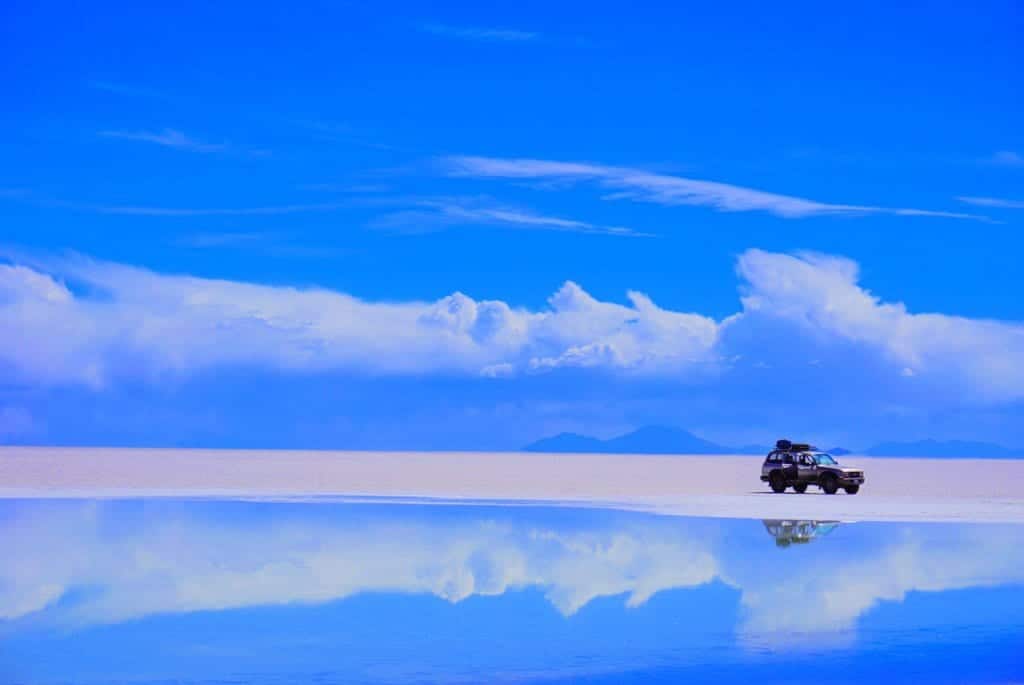 Because the salt flats seem to stretch out endless into the horizon, with little variation in color or texture, the flats are famous for throwing off human’s sense of perspective.

That can make for an interesting playground for a skilled photographer.

Drivers who ply the route almost universally carry plastic dinosaurs in their glove boxes so that they can take photos like this: 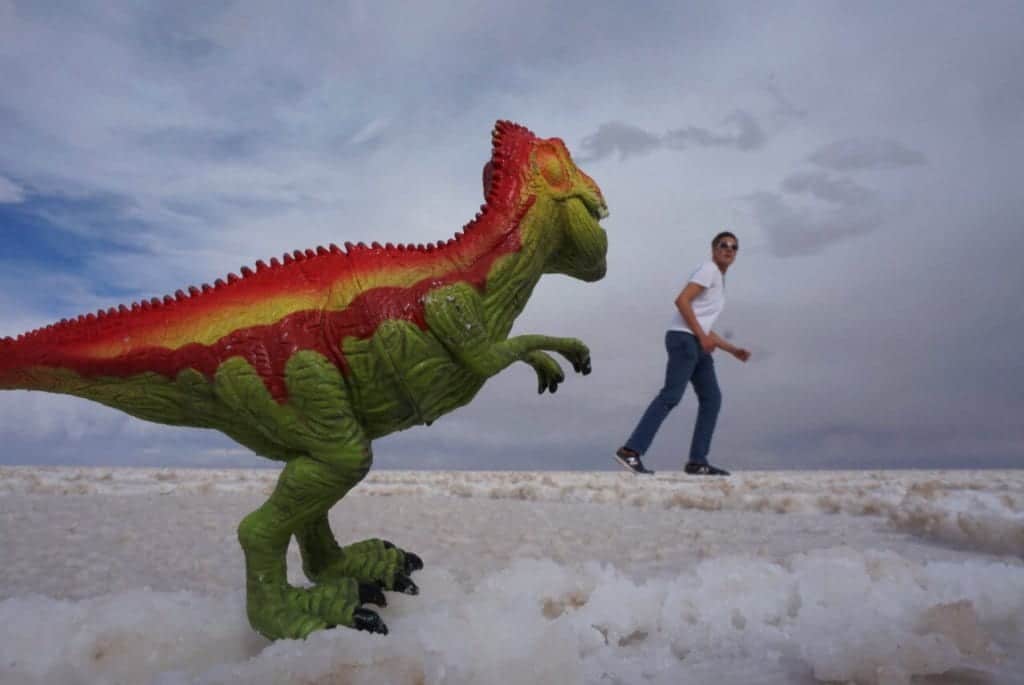 Touring the Salar de Uyuni has become something of a right of passage for those backpacking South America, and at any given time you can see dozens of tiny jeeps criss-crossing the salt plains in the distance.

Each is filled with a hardy group of travelers from around the world.

At the entrance to the Uyuni salt flats is a stop where some plant their country’s flag:

There is also an interesting monument to the Dakar Rally, an annual off-road endurance event that started from Paris to Dakar, Senegal, but has since expanded to include a South America route that runs straight through Bolivia.

You don’t need to join the Dakar rally to experience the Bolivian salt plains, however, as dozens of Uyuni tour companies offer multi-day adventure road trips through the Salar de Uyuni. 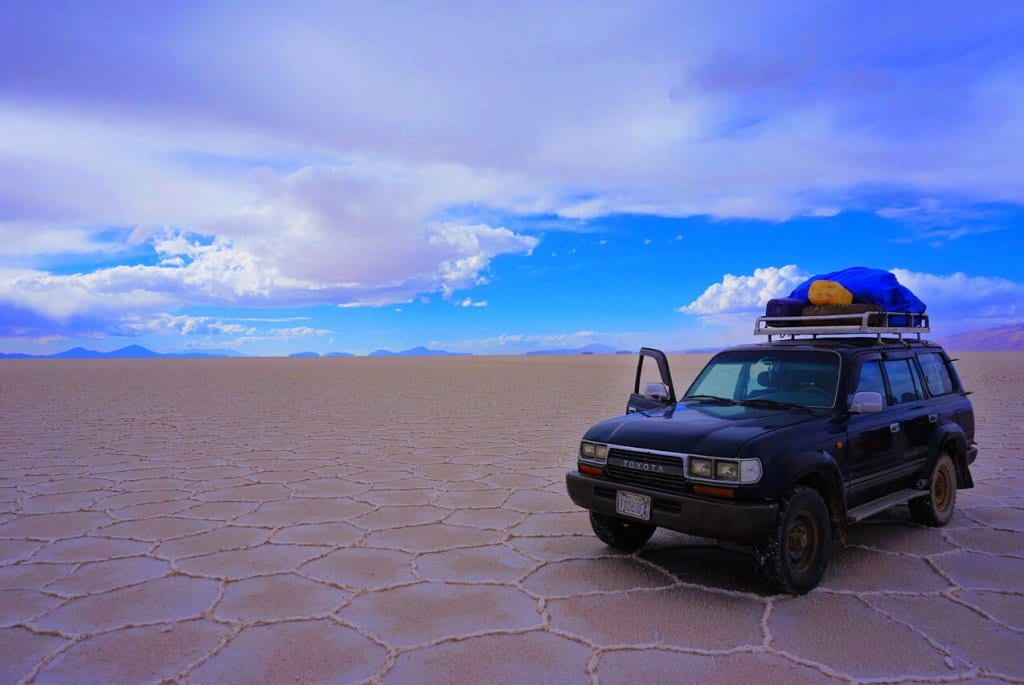 But the classic tour of the Salar de Uyuni takes in a lot more than just the incredible salt flats! You’ll see a ton of jaw-dropping sites, such as this funky rock, which they call the “Rock Tree”:

And colorful high Andean peaks that look like they should be on another world:

Plus several high-altitude lagoons whose unique mineral make up create some truly awesome colors (and also color the flocks of flamingos that live there):

Not to mention geysers that spew steam from the ground:

And, of course, it wouldn’t feel like the Wild West if there weren’t a bunch of abandoned trains everywhere:

And, if you’re willing to shell out the Bolivianos, you can even stay at a luxury hotel made entirely out of salt:

Bolivia’s salt flats are so cool that they just may make you want to jump for joy:

If you want to learn more about how you can visit the Salar de Uyuni, check out my Ultimate Guide to the Bolivian Salt Flats. It’s packed with practical information on how to make the most out of a trip to this incredible natural wonder!