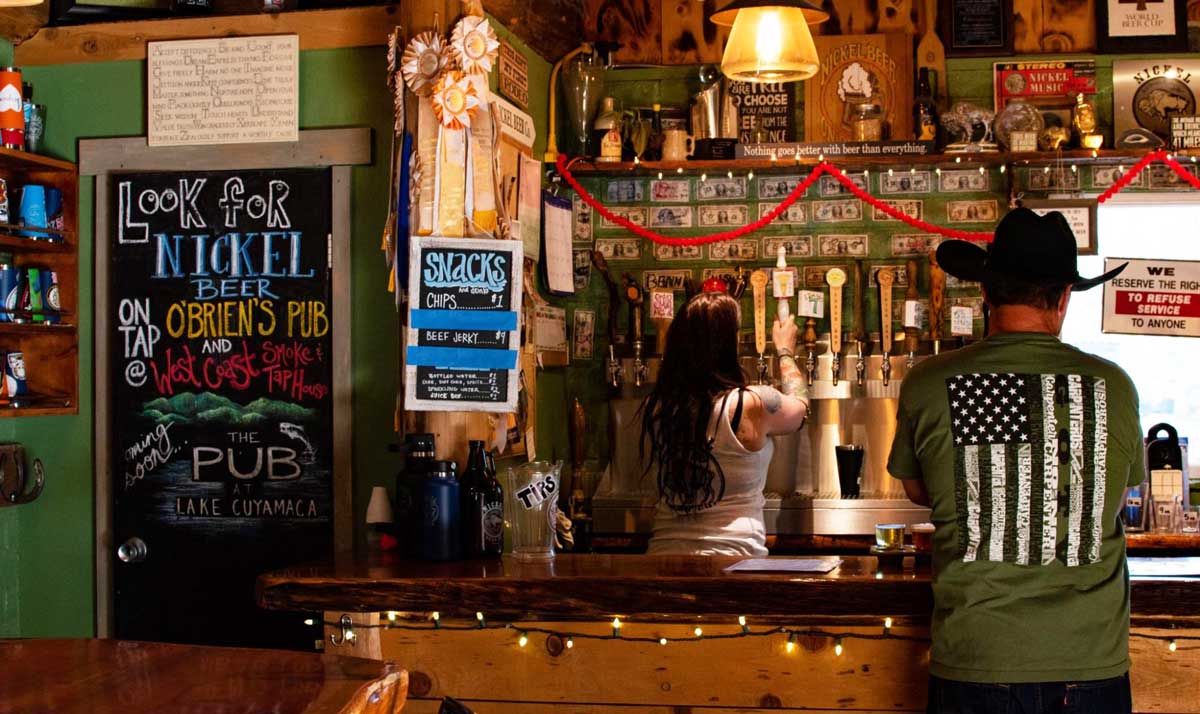 If you’re looking for breweries in San Diego, you won’t have to look far. San Diego, California is widely recognized as the craft beer capital of the U.S. and one of the premier destinations for craft beer lovers. Going on a microbrewery tour is one of the top things to do in San Diego.

Some of the industry’s most well-respected and world-famous breweries call America’s Finest City home, but there are also tons of smaller names that remain hidden gems.

So without further ado, I present some of San Diego’s best breweries!

Grab a brew and a pizza at this family-oriented brewery!

Pizza Port is a community favorite, both for its pizza and its great brews, but what draws the crowds is the welcoming, family-oriented atmosphere. All of the locations have family-style tables which invite large groups to sit and enjoy a pizza and cold beer, and the Carlsbad location even has arcade games which kept me entertained for hours as a kid while my parents socialized.

Not only is the atmosphere awesome, but the brewery is a Great American Beer Fest award winner, proving that Pizza Port is both pretty on the outside and quality on the inside. My favorite beer is Pizza Port Swami’s, a west coast IPA.

👉 Pro Tip:  Carlsbad is in North county San Diego, one of the many spots to take a fun day trip from San Diego!

Burgeon Beer Co., which is a Great American Beer Festival award winner, has three wonderful locations in Escondido, Little Italy, and Carlsbad, which is a full event space and where the magic of beer making happens. They all bring the outside in with natural, earthy atmospheres but most importantly, they all serve fantastic, award-winning brews – Invita is a fan favorite.

Blue Fire Brewing is an up-and-coming local craft brewery with brewing operations and a tasting room in San Marcos. The family-operated brewery creates a welcoming atmosphere that makes everyone feel like a part of the family… a family united by beer! Blue Fire prides itself on making crisp, fresh beer that can be enjoyed by all.

Plenty for All California Pilsner;

Fall Brewing mirrors the trendy neighborhood of South Park, where it’s located. The atmosphere of the tasting room is a unique blend of punk rock, hipster, and brewery that makes it both trendy and inviting.

In addition to great beer (I recommend the Plenty for All California Pilsner), there are also food trucks on site, plenty of indoor seating, and occasionally featured artist displays.

Enjoy a beer with a view of Del Mar’s beautiful wetlands.

Viewpoint Brewing Co. is everything that its name implies – a great brewery that offers its guests fantastic, front-seat views of the 110-acre San Dieguito Lagoon wetland area. As if incredible scenery and high-quality brews weren’t enough, Viewpoint’s food menu is also noteworthy, including a comprehensive brunch menu.

👉 Pro Tip: One of my favorite parts about Viewpoint is that you can go for a hike around the San Dieguito Lagoon and then hit up the brewery for a post-hike beer (my favorite kind). Check out more hikes around San Diego here!

Coronado Brewing Company is one of the oldest craft breweries in San Diego and it shows in the quality of their beers!

Coronado Brewing was created in 1996 on Coronado Island, and its excellence in beer and nostalgic, coastal atmosphere have earned it a reputation as a well-loved San Diego brewery.

The timeless brews have earned Coronado Brewing Company’s beers multiple awards throughout the years, and yet the two tasting rooms have retained the laid-back, inviting vibe that makes it a favorite drinking hole for so many San Diegans.

All of the beers on offer are great, but I recommend giving the Weekend Vibes IPA a try.

Head to the Eppig in Point Loma for the best sunset beer to be had in San Diego.

Eppig Brewing’s skill at making great beer has earned the brewery tons of respect in the San Diego craft beer scene and a coveted award at the Great American Beer Festival. The brewery specializes in lagers – the Eppig Brewing Special Lager is excellent – but has a huge variety of other fantastic beers as well.

The Eppig Biergarten in Point Loma sits on the waterfront and marina offering beautiful views, especially for sunset. While the brewery does not serve its own food, it’s within walking distance of delicious fresh seafood.

👉 Pro Tip: Grab a fish taco from Mitch’s and then walk over to Eppig to kick back and watch a sunset with a beer in hand.

Pure Project not only has great brews but a huge, gorgeous patio with tons of seating.

Pure Project has rapidly quickly made a name for itself in the San Diego beer scene and prides itself on making beer for all palettes. While the Miramar tasting room is the original home of Pure Project, a new location in North Park recently opened and boasts a wonderful, huge outdoor patio garden that has drawn tons of new fans to Pure Project.

👉 Pro Tip: Pure Project’s outdoor patio is a perfect spot for a pre or post-date drink! To make a day out of it, check out my article on the best things to do in San Diego!

Nothing goes together better than a Culture beer, outdoor lawn games, and food trucks!

Culture brewing has locations in both Solana Beach and in Encinitas, and you can’t go wrong visiting either! Both locations include quaint outdoor patio areas that have communal outdoor games that both kids and adults can enjoy (I can confirm) as well as artist pop-ups.

I recommend giving the Mosaic IPA a taste, but any of their beers are excellent.

Get cozy with a beer and friends at this small, local brewery.

North Park Beer Co. is a small, local brewery that has only been around since 2016. Despite its small size it has used those years to make a name for itself, earning an award at the 2021 Great American Beer Fest.

The tasting room, located in the trendy North Park area, creates a warm and cozy atmosphere that’s made complete by a tasty brew. Their west coast IPA called Hop-Fu! Is worth a taste.

Enjoy the bustling atmosphere of Resident Brewing, located in the Gaslamp Quarter!

Resident Brewing is located in San Diego’s historic and bustling Gaslamp Quarter, one of the many awesome neighborhoods in San Diego, and even manages to stand out among the many surrounding bars and restaurants.

The brewery prides itself on creating a relaxed and inviting atmosphere, which they achieve with nostalgic, Americana vibes. If I had to pick one beer to recommend – a truly difficult task – it would be Chasing Citra. Whatever you try, Resident Brewing is definitely one of the best San Diego breweries!

Nickle Beer Company is located in the quaint mountain village of Julian, which is nestled in the northeast of San Diego county. The tasting room embraces its surroundings with an eclectic, warm, cabin atmosphere with indoor and outdoor seating and communal games.

Nickel’s beer makes a great addition to one of Julian’s famous apple pies! Grab a pie at Mom’s and head to the brewery for the perfect treat!

👉 Pro Tip: Julian is one of the best weekend trip destinations near San Diego!

Societe welcomes any and all beer lovers to its large brewery in Kearny Mesa.

In those ten years, Societe has managed not only to brew some award-winning, well-loved beers such as the brewery’s Pupil IPA but also to push the boundaries of the craft beer scene. The brewery is big on creating and fostering community and has focused on pushing for equality in the beer and brewery scene.

Located in Kearny Mesa, the tasting room offers both outdoor and indoor seating in their warm and inviting beer hall.

It’s worth the trip to Alpine to try beers brewed by award-winning brewing brothers.

Mchilhenney Brewing is a family-owned and operated brewery that’s based in Alpine, 30 miles east of San Diego. While the small brewery only has a couple of years on the beer scene, it has decades of brewing expertise behind the scenes. Brewing brothers Shawn and Jamie Mcilhenney, sons of the creator of Alpine Beer Company Pat Mchilhenney, carried on their father’s legacy in the form of this award-winning operation.

If you like punk rock, live music, Manchester United, and great beer, then Thr3e Punk Ales is the brewery for you! The quirky tasting room is located in downtown Chula Vista and has both indoor and outdoor seating. Occasionally the brewery will host live musicians and featured artist displays.

This award winning brewery unites their love of pups and beers by supporting local animal shelters!

Second Chance Beer Co. makes beer with a conscience! Each beer you purchase will not only be fantastic, it will also help support local animal shelters. The award winning brewery has tasting rooms in North Park and Carmel Mountain, both of which offer chill and inviting atmospheres that welcome both humans and their furry friends with open arms.

Share a beer with friends at one of San Diego’s most well-known and world-famous breweries!

Created in 1996, Stone Brewing is a San Diego institution, and, thanks to its incredibly skilled brewing team, Stone is world-famous. Arrogant Bastard Ale put Stone on the map, but in the years since, the brewery has produced some excellent new brews, including Liberty Station’s Witty Moron Black Witbier.

Stone has 6 locations all over San Diego, the largest of which is the Stone World Bistro and Gardens in Liberty Station in Point Loma. The indoor and outdoor space is massive, constructed with beautiful stone architecture. The fantastic beer and extensive menu make Stone a favorite local eatery.

👉 Need a place to stay in San Diego? Check out my article breaking down the best areas for staying in San Diego.

What is the most popular brewery in San Diego?

Stone Brewing Co. is the most popular brewery in San Diego according to a recent poll. With 6 different locations in San Diego and a huge selection of excellent beers, it’s no wonder why Stone has risen to the top of the beer scene, not only in San Diego but in the entire United States.

Is San Diego known for breweries?

San Diego is widely considered to be a pioneer and frontrunner in the craft and microbrewery scene. Many of its breweries continue to create boundary-pushing brews, such as the west coast IPA, that consistently win awards at international beer festivals.

How many breweries are in San Diego?

There are over 150 local breweries in San Diego county, each of which creates distinctive specialty beers and provides unique tasting experiences at their many tasting rooms, restaurants, and breweries.

San Diego is a city characterized by a laid back beachy lifestyle and beer naturally plays a significant role in this coastal way of life! Creative brewing took off and craft and microbreweries in the city multiplied and created an influential and burgeoning beer culture.

While it’s no easy task identifying the best breweries in San Diego, these are some of my favorite and are a great place to start on your San Diego beer journey!