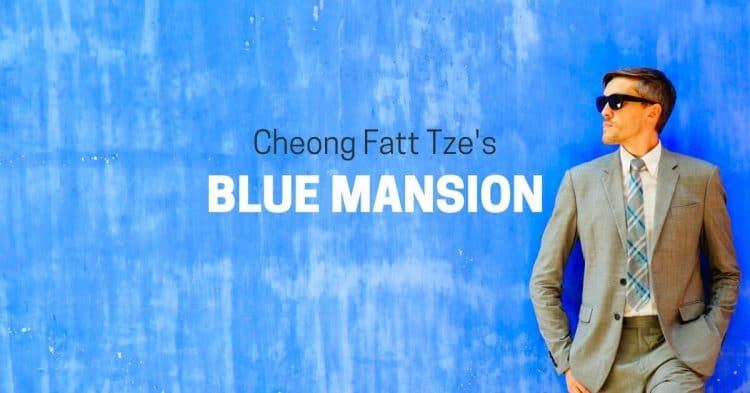 Looking for a unique boutique hotel experience in Penang? Well, you’re in luck because Penang’s Georgetown is home to perhaps  the most fascinating heritage hotel in Malaysia: Cheong Fatt Tze’s Blue Mansion hotel.

What makes the Penang Blue Mansion hotel so special?

For one, it’s a UNESCO World Heritage Site with fascinating history. And it’s so gorgeous that several movies have been shot here (including a scene from Crazy Rich Asians!).

Visiting it is one of the best things to do in Penang, but for a real treat you can book a night in the hotel and get a taste of what it felt like to live as a 19th century millionaire. Read on to learn about the history of Cheong Fatt Tze’s Blue Mansion, how to take a tour, and why it’s one of the top places to stay in Penang! 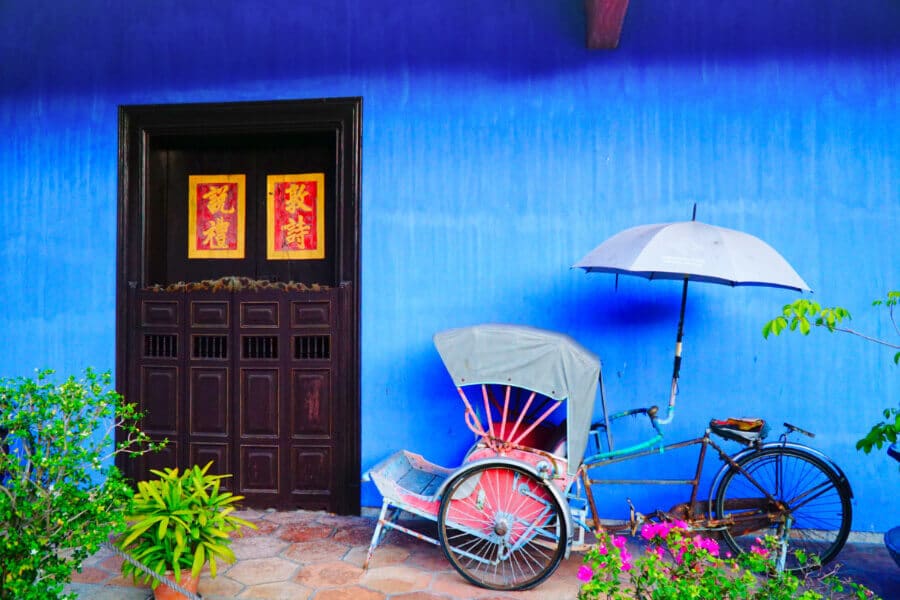 Who Was Cheong Fatt Tze?

You probably didn’t read about him in western textbooks as a kid, but Cheong Fatt Tze was one of the most influential men of his time.

Born to a working class family in 1840, Cheong Fatt Tze’s family migrated to Southeast Asia as a young adult to flee a war that was ravaging China.

He opened a shop in Jakarta, Indonesia and gradually grew it into a business empire spanning the agricultural, industrial, and financial sectors. He eventually built several mansions across the region, but his favorite residence was Penang’s Blue Mansion.

He went on to become an economic adviser to the Empress of China and he’s been referred to as China’s first capitalist.

At the height of Cheong Fatt Tze’s economic empire, the Blue Mansion served as the beating heart of Penang’s Georgetown. He used it not only as a residence but also as an office, and considered it his most prized architectural achievement.

Unfortunately, following his passing the Blue Mansion slowly fell into a depressing state of disrepair. At the same time, many historic buildings in Georgetown were facing destruction at the hands of encroaching developers.

So in the late 1980s, a handful of local conservationists bought it and begun a six year project to restore and revitalize Cheong Fatt Tze’s Blue Mansion. Funding was raised to fix up the dilapidated building, and local artists and artisans were employed to help re-create the fascinating artistic detail that adorned the mansion.

To help fund the project, the Blue Mansion’s rooms were eventually converted into a boutique hotel (more on that later).

The project was a resounding success, culminating in recognition in 2000 by UNESCO. In fact, the folks behind the restoration are widely credited with having saved the entire Georgetown old town (which itself was awarded UNESCO status in 2008) from destruction!

The mansion’s perfectly blue walls and eclectic interior design make it a perfect playground for photographers and artists. Heck, it even somehow made me look good in the below photo ; )

In fact, several famous movie scenes have been shot here, including scenes from the 1993 Oscar winner Indochine, the recently popular movie Crazy Rich Asians (it was the mahjong scene, in case you are wondering), and a 2009 Singaporean film entitled The Blue Mansion.

How to Tour the Blue Mansion Hotel in Penang

If you are visiting Penang, seeing Cheong Fatt Tze’s Blue Mansion should be among your top things to do in Georgetown.

The Blue Mansion runs daily tours at 11 am, 2 pm, and 3:30 pm. Tours last 45 minutes and cost 17 RM for adults online or 16 RM at the door. Booking online (which you can do here) helps secure your spot as tours can run out.

How to Get to the Cheong Fatt Tze Blue Mansion

Getting to the Cheong Fatt Tze Blue Mansion in Penang is easy. If you are staying at a hotel in downtown Georgetown, you can simply walk (use the above Google map).

Alternatively, download the Grab application on your phone. It works like Uber and you can pay with cash or credit card. Just enter the Blue Mansion’s address – 14, Leith Street, George Town, 10200 – and order your car!

The tours of the mansion last 45 minutes to an hour. You’ll walk through the mansion with an English speaking guide who will regale you with tales of Cheong Fatt Tze and the Blue Mansion’s fascinating history and connections with Penang.

Please do note that some parts of the mansion are only available to hotel guests (including the parts where I took the pictures of me, and the picture to the left).

So if you want to take that perfect Instagram-worthy shot, you’ll need to read my next section on how to stay at the Blue Mansion Penang:

If you can swing it, the best way to experience Cheong Fatt Tze’s Blue Mansion is to book a room and stay overnight as a guest.

It’s a wonderful boutique hotel in Penang, made all the more special by the fact that you’re staying in a UNESCO World Heritage site and the home of a former economic titan.

As a hotel guest, you’ll have lots of time to soak in the history of the mansion, to take photographs of the Blue Mansion without any crowds (gotta get that Instagram shot, right?), plus excellent amenities like:

The Penang Blue Mansion hotel occupies a prime location in central Georgetown (do you really think Cheong Fatt Tze would’ve had it any other way?), so you’ll always be near the action.

If you’re ready to book your stay at Cheong Fatt Tze’s Blue Mansion – and live like a millionaire in Penang – then head over to Booking.com to check prices now. ​

One note: that the hotel is adjacent to a hawker food center that plays music in the evenings. So don’t expect total silence in your room. The noise isn’t terrible and the mansion kindly provides ear plugs, but if you’re a light sleeper you might request a room in the north wing.

The Indigo Restaurant at the Blue Mansion Penang

There’s a third way to experience the Blue Mansion that you won’t want to forget: dine in it’s fabulous restaurant, Indigo @ The Blue Mansion.

Indigo is a high end restaurant that serves up fare inspired by Cheong Fatt Tze’s own mixture of the West and the East in a unique historic setting. Indigo serves both lunch and dinner, as well as special menus for events like Chinese New Year. Mains run from RM 60 – RM 120 ($15-30 USD).

Can’t make dinner? Consider just swinging by for a drink at the hotel’s fashionable bar!

If you’re headed to Malaysia, check out this trick for getting a free Lonely Planet Malaysia guidebook!

Oh, and be sure to pin this on Pinterest for later (just click the image to do that):