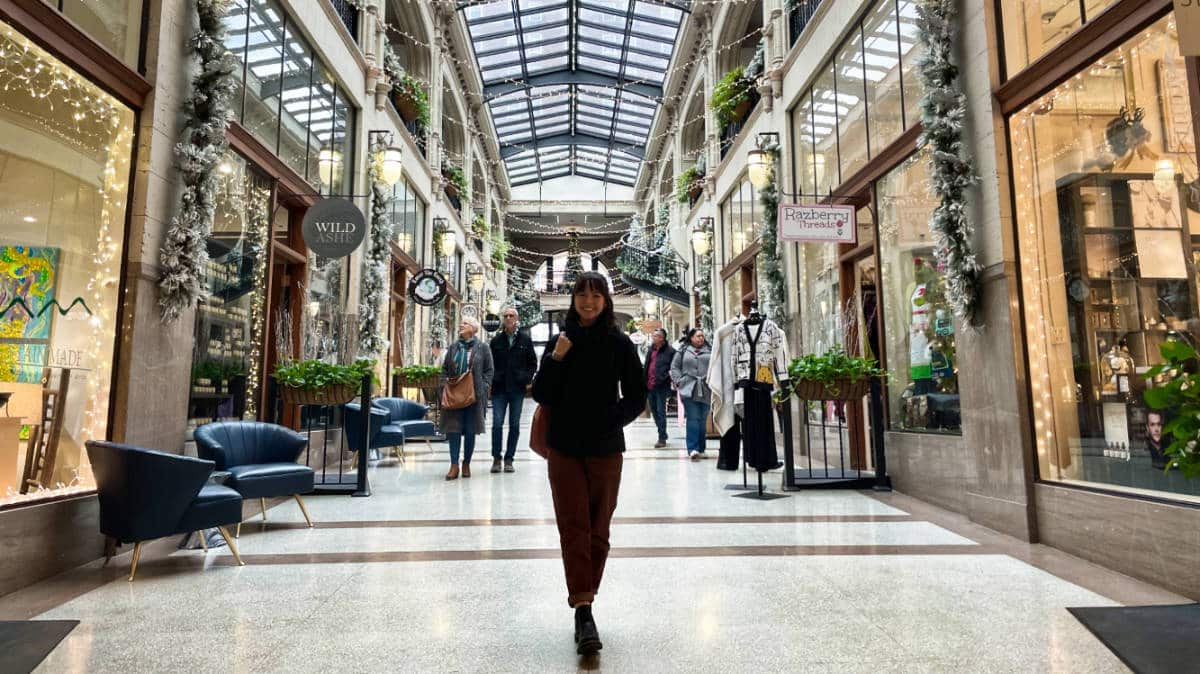 Most people come to Asheville, North Carolina to indulge in its natural beauty, beer scene, and unique attractions. But many people don’t know about the quirky Asheville facts, traditions, and interesting history that have put it on the map.

This article will cover facts about major Asheville attractions, but also lesser known facts about Asheville. Even as an Asheville local who grew up here, I went years before learning some of these!

1. Asheville Used to Be Called Morristown

Asheville was originally named “Morristown.” This was after Robert Morris, who was a politician during the American Revolution. In the late 18th century, it was changed to “Asheville” as an homage to North Carolina governor, Samuel Ashe.

“Keep Asheville Weird” isn’t an official slogan, but you’re sure to find it across the city: on stickers, merch, and even a silo in the River Arts District. It’s all about celebrating the quirky, yet charming spirit that makes Asheville so special. I kinda love it.

The Blue Ridge Parkway is a famous Asheville drive that weaves through 500 miles of scenery throughout Virginia and North Carolina. It takes you near some of the best scenery, hikes, and waterfalls around Asheville.

During the Revolutionary War, the Cherokee sided with the British in hopes of regaining some of the lands they’d lost to settlers. But in 1776, attacks broke out between the Cherokee and settlers. Eventually, the Cherokee were removed from the land and any war efforts. After the war, more land was officially seized from the Cherokee people [Source].

5. Asheville’s Got a Few Ghosts

The city of Asheville has its fair share of skeletons in the closet—well, actually ghosts. Two are particularly famous. The first is a woman named Helen who is said to have hung herself on what is now known as Helen’s Bridge. The second is “The Pink Lady” who reportedly fell to her death at the Grove Park Inn and now haunts its halls.

6. Pisgah National Forest is Known as the Birthplace of Modern Forestry

The first forestry school in America was founded here, and today it can be visited at the Cradle of Forestry. Some of the first designated wilderness areas on the east coast are also within Pisgah Forest. This helped to solidify it as the “birthplace of modern forestry.”

7. Asheville Has a Few Different Nicknames

A lot of different things make Asheville special, and these are reflected in the city’s nicknames.

Nicknames for Asheville include “The Land of the Sky,” “Beer City, USA,” “Bee City, USA,” and my favorite—“Dog City, USA.”

And then some are just for fun like “A-Ville” and “Ashe-Vegas.”

8. Asheville Has Some Mysterious Underground Tunnels

There are many theories about the mysterious underground tunnels of downtown Asheville. Some say they were used for prohibition, criminal activity, or simply storage. It’s also been rumored that they were part of an abandoned underground subway plan. Many pieces of the tunnel are incomplete with dead ends. Some entrances can be found at Pack Square [Source].

9. A Number of Big Movies Have Been Filmed in the Asheville Area

Downtown Asheville and nearby destinations have been used as filming locations for a number of big name movies. Among them include: The Hunger Games, The Last of the Mohicans, Dirty Dancing, Hannibal, and even Forrest Gump [Source].

10. There’s a Scientific Reason the Blue Ridge Mountains are Blue!

The mountains’ famous “blue ridge” is actually due to a scientific phenomenon! In simple terms, the trees and plants in these mountains release a type of hydrocarbon that reacts with molecules in the air. On top of this, a light reaction occurs with these molecules. This combination results in the blue haze you see from afar! [Source].

11. Asheville Has a Long History of Being a Wellness Retreat

Throughout the 19th and 20th centuries, Buncombe County and surrounding areas became a health haven. Those who could afford it flocked to the Blue Ridge Mountains. It was said that the temperate climate and clean air would help heal illness and ailments [Source].

Asheville has one of the highest numbers of breweries per capita in the country! In fact, it’s been voted “Beer City, USA” four times since 2009. There are over 30 breweries throughout the downtown area and around Buncombe County.

👉 Pro Tip: If beer isn’t your thing, there are over a dozen wineries within an hour or so of Asheville.

13. Asheville Was Early to Prohibition

Considering Asheville is now known for its beer, it’s ironic that the city was early to prohibition. In 1907, the city passed its own law banning alcohol. This was 13 years before prohibition became federal law.

14. The Biltmore is the Largest Privately-Owned Residence in America

On Christmas Eve, 1895, the Biltmore Estate opened and became America’s largest privately-owned residence. Owned by the Vanderbilt family, the estate features a gilded age mansion and over 8,000 acres of land. Today, Asheville tourists flock to this much-loved attraction.

Every summer since 1928, Asheville has hosted the Mountain Dance and Folk Festival. This is the oldest and longest running festival of its kind. It features Southern Appalachian music and dance performances. These practices are traditional to Western North Carolina [Source].

In North Carolina, Asheville stands out for its vibrant and lively downtown scene. Nothing is a better example of this than the Friday night drum circles that take place in Pritchard Park. Between about April and October, anyone can attend this free, informal event in downtown Asheville.

17. Asheville Had the First Skyscraper in WNC

In 1924, the Jackson Building was completed and became the first skyscraper in Western North Carolina. At its opening, it was the highest building in North Carolina. It’s a Neo-Gothic style and stands 13 stories high over Pack Square [Source].

18. The Grove Park Inn is a Unique and Historic Hotel

Since it opened in 1913, the Grove Park Inn has become one of Asheville’s most loved and famous hotels. It has hosted many famous guests over the years. Including 10 U.S. presidents and a number of celebrities and prolific public figures. This inn is also said to have a ghost: the Pink Lady.

Oh, and if you need a hotel, it’s also one of the top places to stay in Asheville.

19. One of the First Electric Street Railways in America was in Asheville

One of Asheville’s lesser known fun facts is that it was home to one of America’s first electric street railways. When it opened in 1889, it had three trolley cars. By 1892, railway lines stretched to places like Biltmore Village, the Grove Park Inn, and even crossed French Broad Rivers.

20. Thomas Wolfe was From Asheville

Thomas Wolfe was an American novelist. He’s best known for his 1929 novel, “Look Homeward, Angel.” This book was largely autobiographical and based on his Asheville upbringing. It was actually so close to real life characters and events in Asheville, that it got banned from the public library for over five years. Today, you can actually visit the author’s childhood home, Thomas Wolfe Memorial [Source].

In 1929, The Grove Arcade opened.  It was built to be a cultural and lifestyle hub representing the best of Asheville. Today, the ornate, historic building known as Asheville’s “original mall” continues to represent the heart of the city.

In 1930, the Southern Mountain Handicraft Guild became America’s second oldest craft organization. Today, the organization is known as the Southern Highland Craft Guild. It continues to celebrate and uphold the tradition of Southern Appalachian craft. It’s located at the Folk Art Center of the Blue Ridge Parkway. Here, you can find local goods and enjoy interactive exhibits.

Summer weather in North Carolina is notoriously rainy (see our guide to when to visit Asheville if you’re planning a visit).

But in July of 1916, it absolutely poured into Asheville. Over the course of 24 hours, 22 inches of rain fell. The flood destroyed roads, buildings, and infrastructure around the French Broad River, Swannanoa River, and places like Biltmore Village. Over 80 people died. It’s known as one of Asheville’s worst natural disasters.

What is Asheville known for?

Asheville, NC is known for its surrounding natural beauty, thriving beer scene, and attractions like the Biltmore Estate.

Asheville, NC has a very local and eclectic downtown vibe. It’s colorful and a little quirky, which sets it apart from other WNC towns.

Did you learn any new or unexpected fun facts about Asheville? I hope so. Asheville and other places in North Carolina are full of interesting facts and things to do. If you’ve been to Asheville, what fun Asheville facts did you learn? Let me know in the comments!

Lea Rose Allbaugh is a Chicago-based freelance writer who’s obsessed with all things travel. She caught the travel bug back in 2015 during an exchange to the Netherlands and has traveled to 13 other countries since. Travel writing is her favorite way of inspiring others to get up and go experience the world. In her free time, she loves to eat pasta and make everything a dance party. She also writes at her website, Written World!