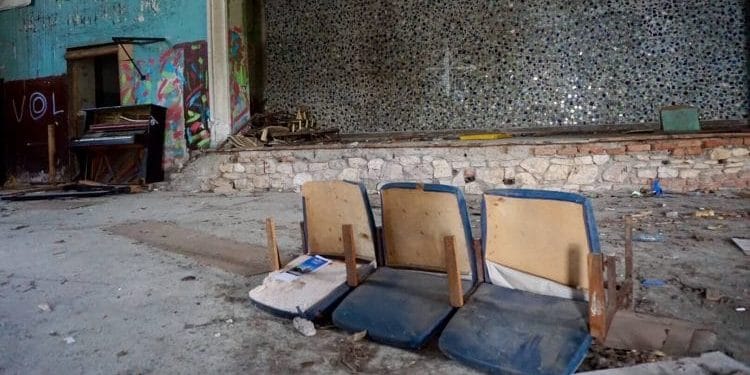 Abkhazia is a remarkable juxtaposition of sorrow and beauty, where abandoned places mix with natural beauty. It has almost been forgotten by the outside world, and even just getting to Abkhazia can be a serious challenge. It’s a land that offers striking landscapes checkered by abandoned buildings everywhere — haunting reminders of the war that tore Abkhazia apart from 1992-93. Here’s a look at today’s Abkhazia in pictures:

Once a summer holiday destination for Soviet Union officials, including Stalin himself, Abkhazia was plunged into violence shortly following the breakup of the USSR.

Abkhazia proclaims itself an independent nation, but almost no governments other than Russia recognize it as such. Instead, most of the international community considers it to be a part of Georgia.

Today, Abkhazia receives few visitors except from Russia, whose military has effective control over Abkhazia.

Abkhazia’s population was cut in half by the war, and today a great many buildings stand totally deserted.

The most developed part of Abkhazia is Gagra, a former Black Sea resort town in the north that is starting to see an influx of tourists from nearby Russia. They are lured there by Abkhazia’s photogenic landscapes and affordable prices.

The capital city of Sukhumi is slowly developing as well, but still feels eerily vacant.

Its many abandoned buildings are covered in graffiti, gritty reminders of the area’s recent past but great material for taking interesting photographs of Abkhazia.

To learn more about Abkhazia, read my travel diary on what it is like to visit Abkhazia. And if you want to plan a trip yourself, check out our guide on what to do in Abkhazia.

And, while you are at it, check out my list of 9 Incredible Places to See in Georgia Europe.