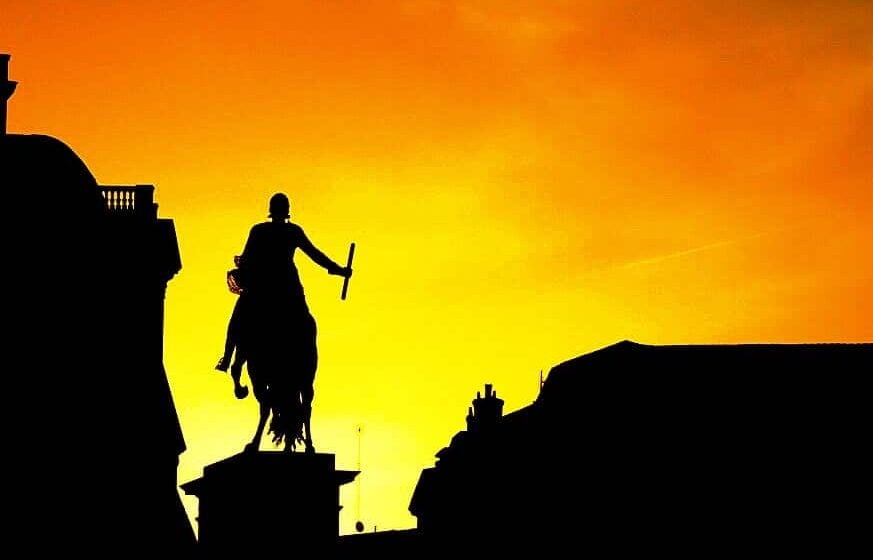 Do you want to take an awesome Madrid photography tour?

Then listen up, because in this post I’ll walk you through the best Madrid photography locations.

Though many tourists eschew it for other destinations in Spain, especially its more popular sibling Barcelona, Madrid is one of the hippest, most vibrant cities in the world.

When the Spanish sunlight softens, the city’s diverse architecture, vibrant streets, and leafy parks turn Madrid into an Instagram photographer’s dreamland. See for yourself by following my Madrid self guided photography tour through some of the top attractions in Madrid.

I started my year-long trip around the world determined to hone my amateur photography skills. Madrid was the first place where I dedicated serious time to simply training myself on how to make the most of my newly bought Sony a6000 mirrorless camera (highly recommended if you, like me, are worried about space in your pack). As someone who has to has to travel on a budget in Europe, I love taking photographs as a great cheap activity in any city.

What follows is a suggested walking route of Madrid (with one metro transfer), tracing some of my favorite Madrid Instagram spots from my week of shooting. This can be done in one day or split up over several to make the most of the dawn and dusk lighting.

📍 Map It: Each of these stops are marked on this Google Map:

Photo Stop 1: The Temple of Debod

The Temple of Debod was originally built in 200 B.C. in Aswan, Egypt. The Egyptian government donated the temple to Spain in 1968 as a sign of gratitude for the help Spain provided in preserving an important archaeological area in Egypt.

📸 Protect Your Gear: While it’s otherwise a very safe city to visit, pickpocketing and petty theft are sadly realities of life in Madrid. If you’re a photographer, you’re probably carrying a lot of gear, so consider protecting it with a good Spain travel insurance policy.

If you don’t whittle away the whole morning staring at the Debod’s reflecting pool, make your way south to the royal family’s official residence. Spaniards can boast that they have the largest royal palace in Europe — the Baroque building contains a shocking 3,418 rooms!

Don’t get too caught up in the sheer size of the palace, however, as nearby there are many cool statutes, cathedrals, gardens, and other spots to get photographically creative:

For example, if you turn to face the Plaza de Oriente, you’ll find some great opportunities to silhouettes against the rising sun. Indeed, one of the reasons Madrid is such an awesome destination is that it is a good place to travel in Europe year-round.

This is the point in the tour where most guides would tell you to head over to the famous Plaza Mayor. But I know you’re not just another travel lemming, and I know you’re probably hungry by now. So our Madrid photography tour of the best Instagram spots instead heads to the most magical place in Madrid: Chocolatería San Ginés.

Hidden in a dark alley and open 24 hours a day, Chocolatería San Ginés serves up sumptuous churros accompanied by a large pot of drinkable chocolate. And at only a few euros, it’s quite a deal for someone who is trying to figure out how to travel cheap in Europe!

Plus, the vintage sign makes for some great Madrid photography shots between bites of the sweet stuff (if you’re still hungry the next day, by the way, check out this walking food tour of Madrid).

Before the sugar rush wears off, skip a few blocks down the pedestrian street to Puerta del Sol:

I’ll never forget spending an hour watching a man dressed as “Chucky” chase around unsuspecting tourists! If you’re unlucky enough to draw his wrath, the only way to satiate Chucky is, of course, to hand over a few pesos…

👉 Need a Place to Stay? Check out our guide to the best hotels in Madrid!

Next head up to Gran Vía, a wide shopping thoroughfare bisecting the city and littered with examples of early 20th-century architecture.

The iconic neon Schweppes billboard lights up the top of the Carrion Building, imposing itself over the shoppers below. Note that better shots can probably be had if you can find your way to the top of one of the nearby buildings (see here for examples). Though many will tell you to go to the cafe in the Corte Ingles building, I found the angles there didn’t work (plus it required shooting through glass). So if you figure out a better way to get this shot from above, please do let me know so we can update this tour!

Hop on Madrid’s excellent metro system and find your way down to the Atocha Railway Station, the city’s main rail gateway and the site of the tragic 2004 terrorist attack.

The exterior of the station provides some great leading lines to work into shots, while the interior offers a spacious garden and several places to grab lunch. Be sure to check out the turtle pond, which apparently has become the favored spot for locals to illegally abandon their unwanted turtles!

From Atocha, walk north and into El Retiro park.

You could spend an entire day just taking photos of the Retiro’s beautiful greenery, glistening ponds, and interesting visitors.

Exit the park from the northwest side and find your way to Palacio de Cibeles, an old post office that has recently be converted into a cultural center.

From a bar on the 8th floor, you can grab a sun downer and capture some shots of the traffic below along Paseo del Prado.

🏝️ Read Next: What to Do in Palma de Mallorca, Spain

Our tour ends a block away at the ornate Metropolis Building.

I have to admit that I am a bit embarrassed by the above shot. I was just learning to use my camera (still shooting on auto, mostly). My losing battle against camera shake gave me a real appreciation for the challenges of night photography. But since you are surely a better photographer than I was, you should be able to capture some iconic shots here.

🗓️ Read Next: When is the Best Time of Year to Visit Spain?

I hope you enjoyed this tour of the best Instagram spots in Madrid.

Taking Madrid photographs is a wonderful, cheap way to explore the city while honing your shooting skills. There is nothing magical about the above itinerary and there are a great many other locations along the way that are perfect for shooting as well. The one thing I would strongly suggest is to make sure you hit the Temple of Dabod at either sunrise or sunset (the reflection doesn’t come out quite the same any other time).

Have fun and please scroll down and leave me a comment with your favorite spot for photography in Madrid!