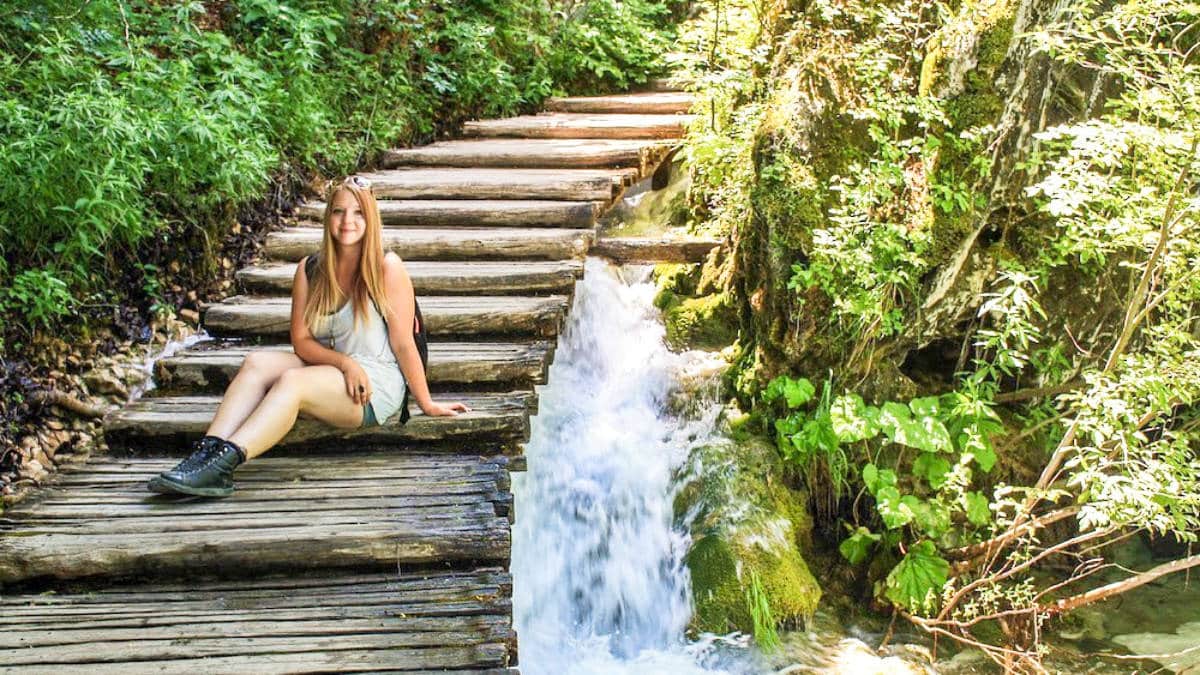 With over 700 islands and seemingly endless things to do, it can be difficult to pick the best Croatia destinations to visit.

Luckily for you, I’ve done a ton of on-the-ground research on this topic and I’m here to spill my best secrets. Not only have I spent over a month in this beautiful Adriatic country, but I’ve also made a point to check out the very best it has to offer.

Disclosure: Travel Lemming is an independent reader-supported blog. You can support my work by purchasing through the affiliate links on this page, which may earn a commission for this site. Thank you!

With a history that dates back to the 7th century, Dubrovnik is a historic city on the Dalmatian coast and is one of the best destinations Croatia.

A hub of all things history, art, food, and adventure, I recommend walking along the old city walls (they’re a UNESCO world heritage site), taking a Lokrum Island day tour, riding the cable car up Mount Srd, trying out a few restaurants, talking a walking tour, or hitting up Uvala Lapad Beach.

If you’re looking for a laid-back nature escape in Europe, then look no further than Mljet Island, Croatia.

While on Mljet Island, I recommend hiking (and swimming) the Odysseus Cave trail, taking a road trip from Pomena to Limoni Beach, visiting St. Mary’s Island in Mljet National Park, and indulging in all the seafood.

🚗 Croatia Road Trip Anyone?: Croatia is perfect for road trips, but you’ll need wheels from a trusted provider. I recommend renting a car with Discover Cars. They’ll outfit you with the best vehicle for your needs and help you with travel insurance too.

Known as Croatia’s Emerald Isle, Korcula in Croatia is located smack dab between Mljet and Hvar islands and is easily accessible by ferry. The island is well known for its dense forest, the photogenic Vela Spila Cave, miles of vineyards, and is even where Marco Polo is presumed to have been born.

That said, if I had to pick a favorite thing to do on the island, it would have to be exploring Korcula’s medieval-era old town. The historic old town is much like that of Dubrovnik, as it’s up against the coastline and is outlined by fortified walls, but much smaller and less crowded.

Just a short ferry ride from Mljet is Hvar Island — a Croatian island known for its parties, lavender fields, architecture (the Spanjola Fortress is incredible), and beaches.

An island that truly has something for everyone, I recommend taking a Hvar Island lavender fields tour, hitting up some of the beach clubs (during Croatia’s summer travel season, you’ll find a party no matter the time of day), spending your days in the water, and wandering through the towns.

Speaking of which, while Hvar town is known for Spanjola Fortress and the parties,  I also recommend visiting the towns of Stari Grad and Vrboska. Where Hvar Town is more bustling, the other towns on the islands are decidedly more laid-back. I stayed in Stari Grad during my time on the island and loved how charming it was.

Located just south of Split, Omis’s main feature is being the place where the Adriatic Sea meets the Cetina River and is one of the premier Croatia destinations for all kinds of adventure activities.

There are so many great adventures to have here, but if you want to go do some water sports then taking a tour is the way to go. This Omis tour from Split will take you white water rafting on the Cetina River and provide all the safety gear you need.

A half-hour drive from Omis, Split is Croatia’s second-largest city and a mainland hub along the coast. Split is cheaper than Dubrovnik, plus it has a ton of tourist attractions for every kind of traveler.

In particular, I recommend hiking through Parka Suma Marjan, taking a Diocletian’s Palace tour (a tour is 100% worth the history lesson – Diocletian’s Palace is incredible!), climbing Split’s bell tower, indulging at one of the many top-tier restaurants, and having drinks along the promenade.

For a great day trip, tour out to Zlatni Rat Beach (also known as the Golden Horn) on the nearby island of Brac! Zlatni Rat is of the most picturesque beaches in Croatia and is made up of white sand and crystal clear water– it’s totally worth the trip!

One of Croatia’s most notable tourist attractions, Krka National Park is full of out-of-this-world waterfalls, caves, hikes, and boardwalks.

Unlike other national parks in Croatia (namely, the more popular Plitvice Lakes), swimming in Krka is allowed. In particular, the swimming spot at Skradinski Buk is amazing, so be sure to bring your swimsuit. About an hour-long bus ride from Split, Krka can be seen on a day trip, although if you want to get the full experience, you can book overnight stays within the park itself.

🚌 How to Visit Via Tour: This Krka National Park tour will cover transportation, entrance fees, and take you to the park’s most notable sites.

A 2-hour drive from Split, Zadar is a little more off the tourist trail than the other major Croatian cities and is a great place to experience Croatian culture at its finest.

Zadar is a city filled with Roman ruins, a charming old town, museums, beaches, mountains (it sits at the base of the Velebit mountain range), hiking trails, and some of the best sunsets in the world.

Most notably, Zadar is home to the famous Sea Organ and Sun Salutation – sound and light spectacles that are world-renowned and truly one of a kind.

With its towering waterfalls, miles of boardwalks, and ethereal colors, Plitvice Lakes National Park is one of the most popular places to visit in Croatia.

Plitvice Lakes National Park is home to over 90 waterfalls, 16 terraced lakes (split into the Upper Lakes and Lower Lakes), and hiking trails for every skill level. In particular, I recommend hiking Trail B for a full tour of the Lower Lakes and Trail E for a quick tour of the upper lakes.

It should be noted that because of the ecosystem protections in the park, swimming isn’t allowed, no matter how enticing it may be. Because of this, I recommend you bring a daypack, sunscreen, water, and a hat so you can keep nice and cool while you explore.

When I visited Plitvice Lakes, I took the bus from Zagreb. That said, this tour from Zagreb is highly rated!

Both the capital and largest city of Croatia, Zagreb is located inland and is known for its Austro-Hungarian architecture, fun museums, and outdoor markets.

While in Zagreb, I recommend visiting the Museum of Broken Relationships (it’s a heart-wrencher), Dolac Market in the main square, the Museum of Illusions, the Nikola Tesla Technical Museum, and strolling the Gornji Grad (Upper Town) and Gradec neighborhoods.

Conveniently, Zagreb is also home to an international airport, making the city a great hub to fly into or out of.

📚 Further Reading: Keep planning now by checking out my Croatia Itinerary Guide. It walks you through how to plan your itinerary, step-by-step.

FAQ’s About Travel in Croatia

What is the best holiday resort in Croatia?

What are the best beaches in Croatia?

What’s the best time of year to visit Croatia?

Croatia can be visited year round, but the best time to visit Croatia is during its shoulder-season, from May to June and again from September to October. Croatia gets absolutely packed with tourists in July and August. Meanwhile, so few tourists visit in winter that many of the major tours and accommodations shut down.

Where is the nicest place in Croatia?

Is Croatia cheaper than Greece?

Generally, Greece is more expensive than Croatia. Certain places in Croatia, like Dubrovnik can get very expensive during high season, but overall most destinations in Croatia are cheaper than their counterparts in Greece.

Where should I go in Croatia for a week?

In one week in Croatia, you have time to visit Dubrovnik, Hvar Island, Split, and Krka National Park. See our full 7 day itinerary for more details on where to go in Croatia.

Is Croatia cheap to visit?

Costs of travel in Croatia are generally less expensive than most other Western European destinations, but Croatia’s rising popularity is driving prices up. If you are on a backpacker budget, it is possible to visit Croatia on a budget of 50 to 75 euros per day.

That’s it for my top 10 best Croatia destinations!

I hope this gave you a ton of inspiration for where to go on your next trip to Croatia, a country filled to the brimming with amazing tourist destinations and must see attractions to add to your bucket list.

For more information on Croatia and European travel, check out these articles:

Have fun in Croatia!