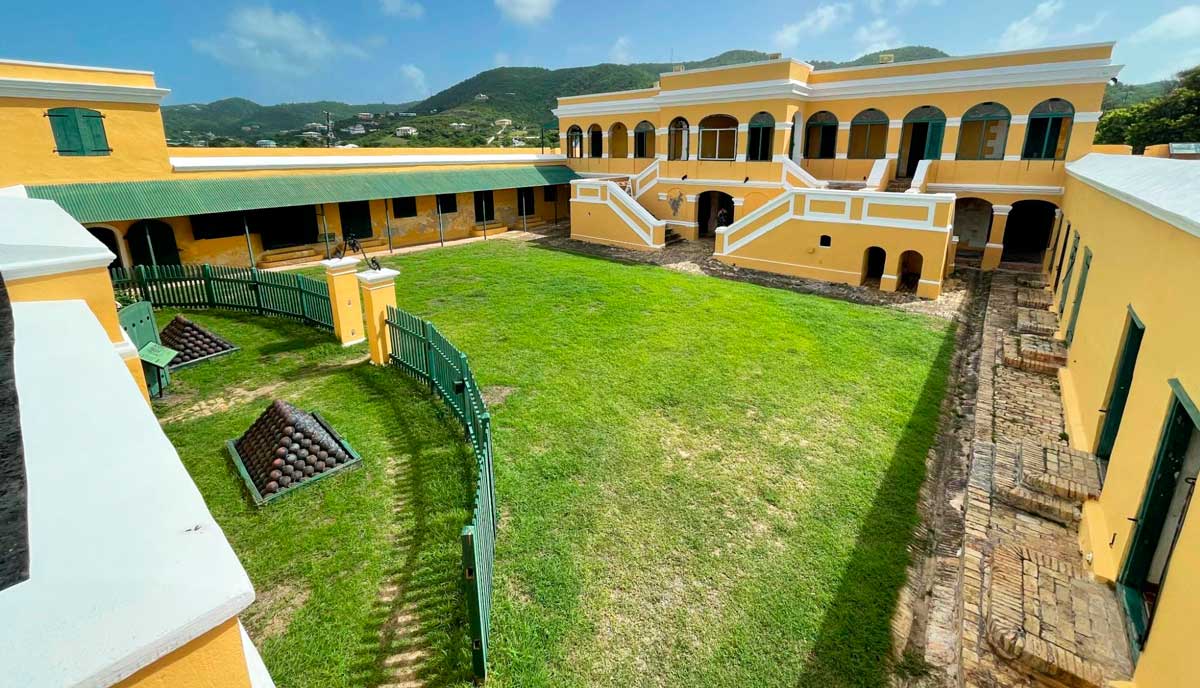 Christiansted National Historic Site is a seven-acre park managed by the US National Park Service on St. Croix in the US Virgin Islands. The grounds include five historic structures, including Fort Christiansvaern, that served as an integral part of the island’s deep and complex history.

Walking the district might have been one of my favorite things to do while visiting St. Croix while also making my list of the best places to visit in the US Virgin Islands. If you’re in St. Croix, take some time to enjoy this affordable activity for a few hours!

The park brilliantly explores the way of life on St. Croix beginning with the Danish occupation in 1733 through the purchase of the island by the United States in 1917. On full display is the masterful restoration of Danish Colonial architecture and insights into the stories of the human experience on the island.

The Garden of the Antilles

The US Virgin Islands & the National Park Service

❓ Want to Learn More? For a deeper understanding of the complex history of St. Croix, check out this fascinating brochure courtesy of the National Park Service website!

🎟️ Entrance Fees: Adults 16 years and older are $7 to enter Fort Christiansvaern and its exhibits. Under 16 years are free. Valid National Park pass holders are free of charge according to their pass guidelines.

🅿️ Parking: You’ll find free, 2-hour parking at Fort Christiansvaern. All cars must be removed from the lot by 4:30 PM or they will be towed. Don’t forget to drive on the left!

🌞 Weather: Average highs year-round are between 84°F and 89°F. Check the current weather in St. Croix from the National Weather Service.

🌀 Hurricane Season: Peaks in September and October. ​​Monitor disturbances in the Western Atlantic with the National Hurricane Center.

🇩🇰 Original Purpose – protected Christiansted from external threats like privateers and pirates and inward slave revolts. It was also used as a prison, police station, and courthouse, amongst other purposes.

🇺🇸 Today – Fort Christiansvaern is the focal point of Christiansted. This is the contact point for St. Croix’s three national parks and features exhibits highlighting the human experiences during the island’s deep history. Begin your walking tour of the 7-acre district here.

⛪ Original Purpose – the Steeple Building was the home to the island’s first Luthern congregation before becoming a bakery, hospital, and school.

📷 Today – before the hurricanes of 2017, the Steeple Building was open for self-guided tours. As of October 2022, you can enjoy the building from outside.

🗃️ Original Purpose – the DWIC building was used as a storehouse and auction site for the slave trade.

📦 Today – the building is still used as a storeroom for the National Park Service. Outside of the warehouse are public restrooms.

🧾 Original Purpose – the Customs House was used as the clearinghouse for all things entering and exiting the island. Taxes were collected for goods weighed at the Scale House, ships were inspected and records were made of all people and cargo.

💻 Today – the administrative offices for the National Park Service are inside the old Customs House.

⚖️ Original Purpose – all imports and exports to St. Croix were weighed on a massive scale on the 1st floor. Weight was recorded and the goods were taxed appropriately at the nearby Customs House.

📚 Today – You can view the impressive scales before wandering through the joint NPS bookstore. The Scale House borders the popular Christiansted Boardwalk.

Visit During the Offseason

The offseason in the US Virgin Islands coincides with peak hurricane season. Although you run a slight risk, it’s the cheapest time to visit and you might have the place to yourself.

Wandering around the Historic District will inevitably bring you to the other attractions within Christiansted. The Government House, Lutheran Church, and Boardwalk are a few noteworthy places to check out.

If you’re limited on time, I recommend sailing to Buck Island in the AM, exploring Christiansted National Historic Site in the afternoon, and finally, kayaking Salt River Bay Historical Park and Ecological Preserve at night to witness the iridescent bioluminescent bay. This rare natural phenomenon also occurs nearby in Puerto Rico’s three bioluminescent bays.

What is the main town in St. Croix?

Christiansted is the main town on St. Croix on the northeast coast serving as the hub of activity for the entire island.

Does St. Croix have a National Park?

Are there any National Parks in the Caribbean?

The US National Park Service protects and manages six different national parks in the Caribbean between the US Virgin Islands and Puerto Rico.

Christiansted is one of the most enjoyable places in the Virgin Islands and I hope you love it as much as I do. Leave a comment below letting us know what your favorite part was!

Until then, check out our budget tips on how to make travel to the USVI affordable!

Andrew Bloem is an adventure travel writer from Fort Lauderdale, Florida. A pirate at heart, his travels usually don’t stray too far from a palm tree and an ocean view. When he’s not writing guides for Travel Lemming, you can find him typing away at the local tiki bar for his site, OceanWide Explorers.