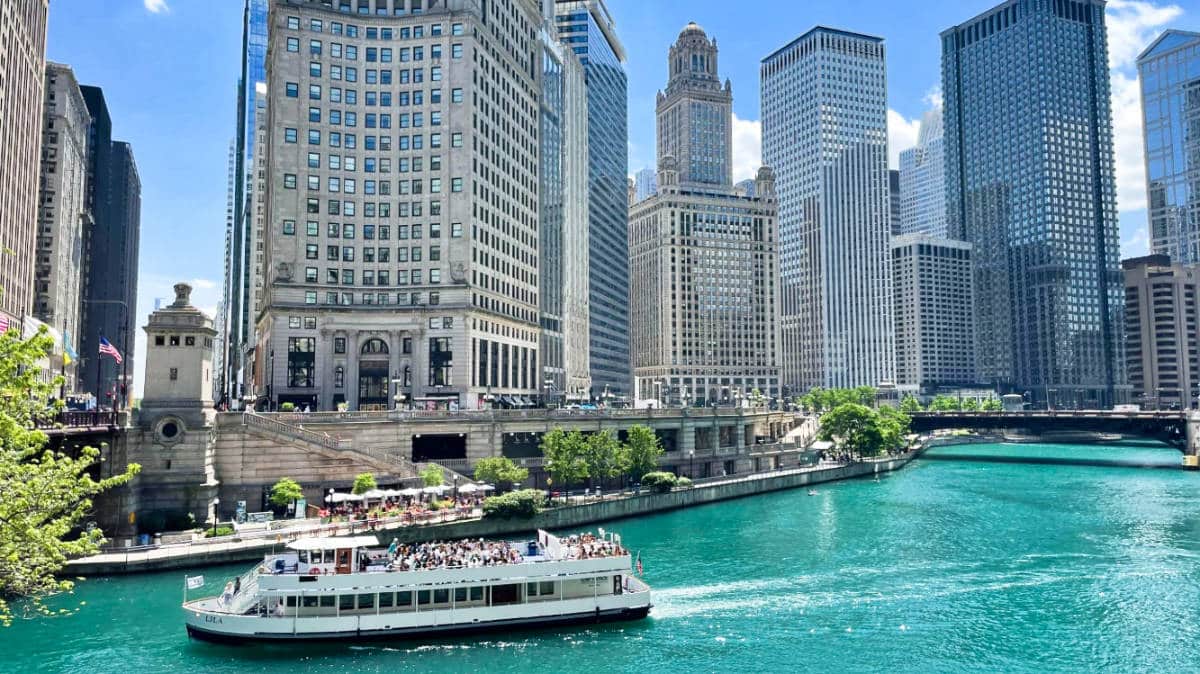 Today, I’m going to cover some fun Chicago facts to help you get to know my favorite city in America. You’ll learn that there’s a lot more to the so-called Windy City than meets the eye.

Chicago is a vibrant and diverse cultural hub. Chicago draws millions of visitors each year for its world-renowned attractions, friendly vibes, and abundance of fun things to do.

1. It’s Actually Not the Windiest City

Despite being dubbed “The Windy City,” Chicago isn’t actually the windiest city in America! In fact, it doesn’t even rank in the top five.

Nevertheless, Chicago is known as “The Windy City” for a reason. Winds from Lake Michigan blow through Chicago.

Additionally, in the 19th century, many journalists referred to Chicago residents and politicians as “full of hot air.” This unintentionally gave Chicago its nickname [Source].

2. Chicago is the 3rd Largest City in America

Chicago is the third largest after New York City and Los Angeles. It’s also known as the capital of the Midwest. 234 square miles make up Chicago and 2.7 million people call this city home [Source].

3. It’s a City of Neighborhoods

One of the most important facts about Chicago that visitors should know is that it’s a city of neighborhoods. There are 77 designated community areas, and these make up different neighborhoods. Each of these Chicago neighborhoods offers something different. I highly recommend exploring beyond downtown [Source].

In 1871, one third of Chicago was totally destroyed by a fire that burned for more than 24 straight hours. Over 17,000 buildings were burned and 300 people died. Although tragic, this fire led to a “great rebuilding.”

This resulted in the incredible architecture and urban design that Chicago now has. A few buildings survived the fire, including the Chicago Water Tower and Pumping Station [Source].

5. Chicago is the Birthplace of Modern Architecture

After Chicago’s Great Fire, an architectural boom followed. This led to Chicago becoming the birthplace of modern architecture.

Built in 1885, the Home Insurance Company building was the first skyscraper in the world. Today, Chicago’s Willis Tower (formerly Sears Tower) is the second tallest building in the Western hemisphere, and one of the most famous Chicago landmarks.

Another significant building is Harold Washington Library Center. It was once the largest library in the world. Chicago is also well known for architecture by Frank Lloyd Wright.

6. Chicago Has a Lot of Nicknames

You probably know Chicago as “The Windy City,” but it has many other nicknames. These include: The Second City, Chi Town, City of Big Shoulders, The White City, and City in a Garden.

The word “Chicago” comes from Algonquin words “Chicagou” and “Shikaakwa” which translate to “wild garlic” and “onion field.”

7. Chicago is Filled With Green Space

In the 1830’s Chicago adopted the motto “urbs in horto” which translates to “a city in the garden.” This is because of Chicago’s impressively large park system. Within Chicago, there are over 8,000 acres of green space, 600 parks, and numerous walking trails [Source].

8. The CTA is the 2nd Largest Public Transportation System in America

Following New York City, Chicago has the second largest public transportation system in the country. The Chicago Transportation Authority is commonly known as the “CTA.” It serves 35 suburbs throughout six counties.

The CTA train lines are referred to as the “L” because they’re elevated. The CTA includes trains and buses that connect the city [Source].

Chicago sits on two major bodies of water: Lake Michigan and the Chicago River. This includes 26 miles of lakefront and numerous free beaches in Chicago. Because of this, access to calming waters is always nearby. Each year on Saint Patrick’s Day, the Chicago River is dyed green [Source].

As of 2020, Illinois is one of 21 states in the U.S. where marijuana is legal. There are a number of dispensaries around the city, and anyone 21 or older can legally purchase. If you do purchase cannabis, make sure it’s from a licensed seller and abide by the law.

Chicago’s museums span art, history, science, culture, and more. Some of the most popular museums in Chicago include: the Art Institute of Chicago, the Museum of Science and Industry, Adler Planetarium, and the Field Museum of Natural History. These museums and others feature world class collections and exhibits.

Chicago is overflowing with music, theatre, dance, film, and other art forms. The city has over 200 theaters, 250 live music venues, and 200 professional dance companies. It also hosts more than 70 annual music festivals and 40 film festivals.

15. The World’s Largest and Longest Running Permanent Digital Art Installation is in Chicago

Art on theMART is a public digital art display that takes place on the facade of theMART in downtown Chicago. This display features colorful, moving art projections. It’s free for the public to enjoy every night from the RiverWalk.

16. Chicago is a Foodie City

Chicago is an amazing foodie destination with every cuisine imaginable. There are over 7,300 restaurants in Chicago, and 26 Michelin star restaurants. Chicago classics include deep dish pizza and Chicago-style hot dogs. Brownies were also invented in Chicago! [Source].

Get this—the Chicago River flows backward! This is because, in 1900, engineers achieved the “largest public earth-moving project ever completed.” This was done for sanitation and contamination prevention purposes. The river now empties into the Mississippi River, and not Lake Michigan.

18. O’Hare is One of the World’s Busiest Airports

Chicago’s O’Hare International Airport has been named the fourth busiest airport in the world. It has direct flights to over 150 U.S. destinations and more than 50 international cities. In 2021, approximately 54 million travelers passed through [Source].

Grant Park is home to some of Chicago’s biggest attractions. This includes Cloud Gate in Millennium Park (aka, “the Bean”), the Art Institute of Chicago, Museum Campus, and Buckingham Fountain. The park is located in the heart of Chicago’s downtown Loop and has over 300 acres of green space [Source].

Chicago is renowned for its blues and jazz. This is due to the city’s rich history of these genres being brought to Chicago during the Great Migration.

Jazz, but blues in particular, developed a unique sound here. Electric Chicago Blues is a great example. Musicians like Muddy Waters, Willie Dixion, and Buddy Guy are among the city’s major players in these genres and the development of rock ‘n’ roll.

👉 Pro Tip: The annual Chicago Blues Festival is the largest festival of its kind in the world. Read our guide for a full list of the best festivals in Chicago.

Chicago is a melting pot of ethnicities, cultures, languages, and more. This diversity influences everything from art, to food, to the community. You can find people from all walks of life in Chicago, and that’s one of my favorite parts of the city.

22. Chicago is Known as the Home of Improv Comedy

For up and coming comedians and improv talent, Chicago is a mecca. This is due to the city’s long standing comedy club history. The Second City is arguably Chicago’s most famous comedy club, and has churned out talent ranging from Tina Fey, to Steve Carrell, to Mike Meyers.

23. Chicago is One of the Best Biking Cities

For a large city, Chicago actually has great biking trails and pathways. There are over 300 total miles of bike lanes in the city, and more than 800 Divvy bike share stations. The lakefront trail is my personal favorite biking trail, which goes for almost 19 miles along Lake Michigan.

In 1937, the first blood bank took place at Cook County Hospital. This was introduced and led by Dr. Bernard Fantus. After this, more blood banks popped up around the country.

Don’t let the big city fool you, Midwestern hospitality radiates through Chicago. People here are notoriously laid back and friendly. As long as you’re polite, you can expect most Chicagoans to return the good vibes.

26. Many Famous People Come from Chicago

A ton of famous people are native to Chicago or have made Chicago their home. This includes actors and athletes like Robin Williams, Dick Butkus, Melissa McCarthy, Jennifer Hudson, and Harrison Ford. It also includes even bigger names like former President Barack Obama and Walt Disney.

27. You Can See Four States from Willis Tower

On the 103rd floor of Willis Tower is The Skydeck. Here, you can step out onto a thick glass ledge that’s 1,353 feet above the ground. On a clear day, you might be able to see four states: Illinois (obviously), Michigan, Indiana, and Wisconsin.

It’s a widely known fact that deep dish pizza hails from Chicago! It was created by Pizzeria Uno’s founder, Ike Sewell in the 1940s. Unlike normal pizza, deep dish pizza is baked in a pan, with a thick crust and layers of cheese, sauce, and toppings [Source].

29. Chicago Has a Lot of Burger Kings

Here’s one of the most random facts about Chicago: the city ranks third for having the most burger kings in America. As of 2022, there are 52 total locations. If you really wanted to, you could “have it your way” at a different Burger King each week of the year.

What are 3 facts about Chicago?

Three facts about Chicago: it’s the third biggest city in America. It’s actually not the windiest city either. Lastly, it’s a major destination for arts, architecture, and sports.

Chicago is the capital city of the Midwest. It’s a vibrant city that boasts world renowned attractions across arts, culture, and sports. It’s also located on the shores of Lake Michigan.

Lea Rose Allbaugh is a Chicago-based freelance writer who’s obsessed with all things travel. She caught the travel bug back in 2015 during an exchange to the Netherlands and has traveled to 13 other countries since. Travel writing is her favorite way of inspiring others to get up and go experience the world. In her free time, she loves to eat pasta and make everything a dance party. She also writes at her website, Written World!