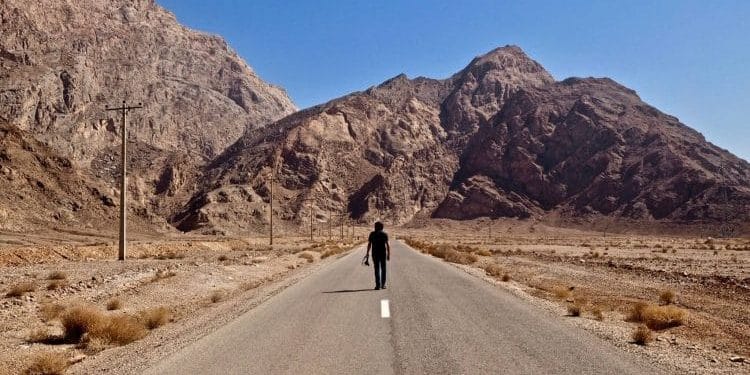 I really wanted to backpack Iran on my trip around the world. Iran is a country filled with some of the most incredible history and culture in the world. And, though the politics of its government have long left it isolated and off the tourist trail, it is starting the process of opening up to the world. Iran may be one of the most intriguing travel destinations on the planet.

Unfortunately, Iran severely restricted the ability for Americans to travel to Iran as a result of the Trump administration’s travel ban (so I went to hike Kyrgyzstan instead).

Since I couldn’t travel to Iran, I reached out to Hayden Albrey, an Australian who blogs at BackpackerTrack.com, and who recently spent three weeks backpacking Iran to give us an insider’s perspective on what it is really like to travel to Iran.

Here’s my interview with him:

Hayden — thank you for agreeing to talk to us about what it is like to backpack Iran. Could you start by just briefly giving my readers a little background on yourself, your site, and your travel style?

I think my background is not dissimilar to yours! Except I was (I guess I still am?) an engineer working in the mining industry in Australia. At the age of 30 I decided to quit and go travelling for a while. I planned on travelling for at least 18 months. That was about 40 months ago and at last count I have visited 45 countries in that time. I am a backpacker, but not the wilderness camping kind. Rather the kind that stays in cheap hostels and lives out of a 50L backpack for six months at a time. Reducing my life to such a small selection of items in a backpack gives me such a liberating feeling.

I started BackpackerTrack.com about one year ago. Initially there was a heavy focus on writing ‘backpacking travel guides’ for the places I visit. In fact, you should check out my Balkans guide when you head that way. These days I blog more about my travel. Iran was the first country that I really blogged extensively about. Typically my blog posts are photo heavy and with a lot of history thrown in. I try to tell a story and give some historical context behind the photos. Here is my Iran blog.

So it’s probably fair to say that Iran isn’t on your average tourist’s bucket list. What made you want to go to Iran?

I guess there were several things that came together to make it happen. I was looking to fly from Australia to Europe and I was checking for cheap flights and found a flight from Kuala Lumpur to Tehran. It was about 150 USD. I knew that I could get to Kuala Lumpur cheaply and also from Tehran into Europe would be cheap. I also remembered a conversation I had with a 19 year old guy from Germany a few months earlier while travelling in Sri Lanka. He had mentioned how welcoming and friendly he had found Iran and that despite the lack of tourist infrastructure, it was a country that it was still relatively easy to backpack through. I then read a couple of travel blogs and quickly decided it was a trip worth making. Amazing architecture, new culture to experience, ancient Persian ruins, friendly people and cheap. It ticks all my boxes.

How did you go about organizing the trip? What was the immigration process like?

No tour providers, it was all self organised. Thankfully the immigration procedure was dead easy. Iran offers a visa on arrival to citizens from a large group of countries. It is straight forward and takes about 45 minutes. I blogged about the visa on arrival process here. Unfortunately that visa on arrival is not available for citizens of the UK, US or Canada (among others). You guys need to arrange a visa beforehand and also must be on an organised tour. Once inside the country I had a decent idea about what cities I would like to visit, but as in often the case if your are staying in hostels, you quickly meet other travelers going the opposite direction who can give you great advice on where to visit next.

Can you give us an overview of what you were doing in Iran?

Sure, I started in Tehran, the capital. It sits just south of the Caspian sea. There are some cities further north I would have liked to visit but it made the most sense to head south and visit Kashan, Isfahan, Shiraz, Yazd and then loop back to Tehran. These cities are all worth visiting and make a great itinerary for someone with 3 weeks like I had. During that time I visited a lot of mosques, ancient cities, desert oases and ate a lot of kebab!

What are some of the highlights for someone who is looking to go to Iran?

The ruins of Persepolis should be a highlight for anyone that is interested in ancient history. The Persian Empire stretched from what is now Greece and Libya in the west, all the way to the Indus basin in what is now Pakistan and Afghanistan. And Persepolis was its capital. It took Alexander the Great to bring the Persian Empire down. You can visit Persepolis from Shiraz. Shiraz also has two of the most beautiful mosques I have ever seen, The Pink Mosque and the Shah Cheragh Shrine.

Perhaps the other is to make sure you do a day trip out of the city of Yazd and visit Kharanaq, Chak Chak and Meybod. One of the best day trips I ever have done. They are all close together in the deserts and unlike anything you will see anywhere else. Kharanaq is an abandoned mud-brick city that you can explore. Chak Chak is an old remote Zoroastrian fire temple located up in the mountains and Meybod has a 2000 year old mud brick fort at it’s centre that is slowly sinking and being  reclaimed by the Earth.

Where were you staying during your trip? What was the transportation like? How was the food? I’m assuming there is no alcohol involved?

Almost the entire time I was staying in hostels. Though in Iran, some times the hostels are actually small budget hotels that have re-purposed a room as a dorm. The hostels were lovely, always included a free breakfast and were full of interesting people to meet. Couchsurfing is also incredible popular in Iran and I recommend everyone to give it a shot. Transportation is excellent! The intercity buses are very well equipped coaches and very comfortable. You can expect to pay 5-10 euro for each leg of your trip on the buses. There is no alcohol, but, if you meet the right people in Tehran, you can get yourself invited to an underground party where they drink alcohol. When you are socializing in Iran, tea takes the place of alcohol. I had many long chats in hostels while chain drinking tea.

Haha. That sounds great. What was it like to engage with the locals there?

The locals in Iran are the friendliest I have met anywhere in the world. Their readiness to engage with you and the warmth that they show when they do is one of the highlights of Iran. It is something you read about time and again in travel blogs about Iran, but once you experience it yourself it really blows you away. When you’re in Isfahan visit the Naghsh-e Jahan Square and sit down somewhere. There will be a regular stream of locals coming up to you for a chat. They aren’t trying to sell you anything, they just want to find out why you decided to visit and what you think of their country. Which is a lovely change from the usual interaction in large central squares that tourists get.

I’ve read in media reports that there is a major generational divide in Iran, with a very young and progressive population coming into friction with a older more traditional guard. How’s that compare to your experience?

You can certainly see it in the streets. It stands out most when you look at the way younger women dress as compared to older women. Young women (typically) wear the hijab pushed to the back allowing the majority of their hair exposed. They also tend to be very fashion conscious and wear colourful hijab, scarves and dresses. Older women are more conservative and often will wear a chador. Outside of that it was invisible to me. I didn’t meet the famed Iranian morality police that patrol the streets, but they are there. Perhaps the reason I didn’t see the divide much is that nearly all of my interaction was with the young progressive population.

Very interesting. What were some other memorable moments from your trip?

The time I couchsurfed in Isfahan was pretty memorable. My host was tied up at work so his neighbour let me in. His neighbour was a 6 year old kid. So I ended up spending 3 hours drinking non-alcoholic beer and listening to David Bowie songs with a 6 year old kid who spoke no English. Another memorable aspect of the travel was the aforementioned intercity buses. The views out the bus windows as you travel through the deserts from one city to the next are exceptional. Some of my best photography in Iran was taken shooting through a bus window. I really recommend taking day buses instead of night buses for this reason.

How did the trip feel from a safety perspective? Do you think is safe for Western travelers?

Absolutely. It is one of the safest countries I have visited, this includes my home country of Australia. Iran may be surrounded by countries embroiled in conflict but Iran has continued to stay out of all of it. There is also very low petty crime in Iran. So you don’t need to be worry about being mugged while walking the streets, which as a backpacker, is they type of crime that I am most susceptible to.

What would you say to anyone who was thinking about potential travel to Iran?

There is no reason not to visit. Depending on how the next few years play out politically, Iran may go through a tourism boom over the next decade. If it does, it may be that you want to visit the country now and not in 5 years time. Sure, in 5 years time maybe you won’t need to bring all cash with you (bank cards don’t work in Iran), but maybe there are 10x more tourists then there are now and maybe the locals aren’t quite so willing to engage with every tourist they see.

Anything else you’d like to add for anyone considering whether to travel to Iran?

As I mentioned before, citizens of the UK, US and Canada need to jump through some hoops in order to visit and must have booked an organised tour in order to visit. But don’t let this dissuade you from going. These tours are nothing like the ‘tours’ that tourists take in North Korea. You will see the same things as I did, only with a group of other people and a little less freedom about your itinerary. A lot of reputable tour groups run in Iran. I have heard good things about G Adventures, so maybe check them out.

Thank you so much Hayden!

And, readers, what do you think? Have you had the chance to travel to Iran? Let us know your experience in the comments!