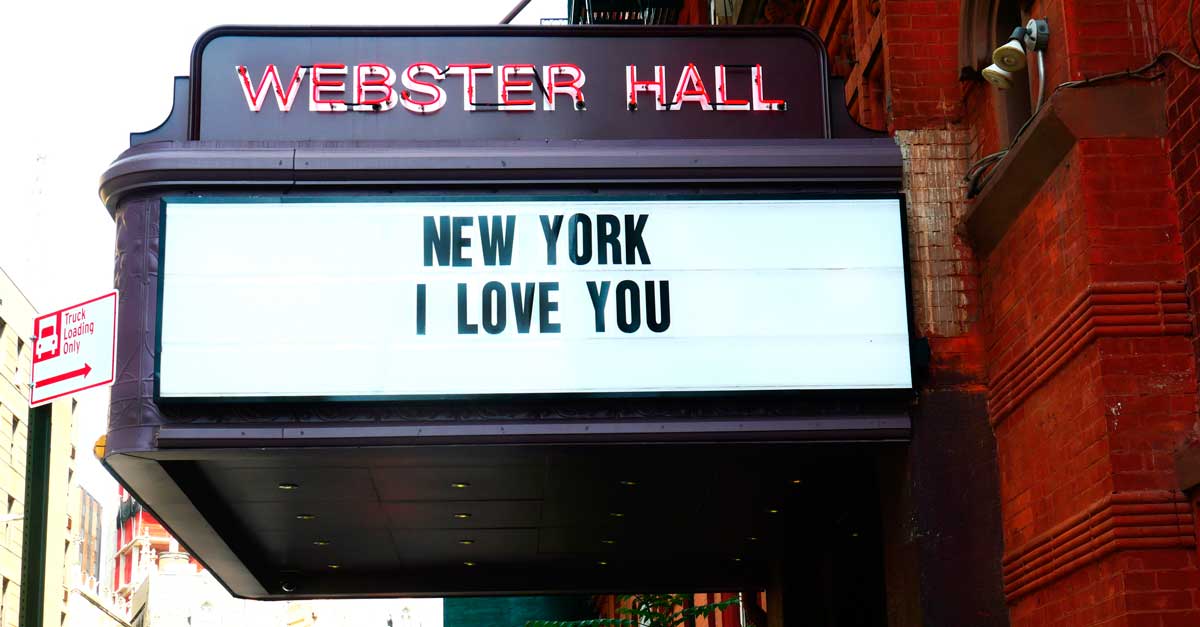 Everyone knows that when it comes to music venues, NYC is unmatched. New York is simply home to some of the best live music venues in the country.

As a live music lover who lived in NYC all throughout college, I can tell you firsthand. The live music venues in New York City are just as brilliant as everyone makes them out to be.

New York City live music venues feature an endless array of musicians and genres. There are enormous stadiums that put on shows with a 200k headcount, as well as more intimate venues showcasing upcoming artists.

There are literally dozens of places to find live music across New York’s boroughs that operate all year-round. So, no matter when you visit New York there will always be tunes. Let’s get right into the amazing live music shows and concert halls in NYC.

Carnegie Hall is a massive player in the fine music arts realm. Its space is just as large as its influence.

Carnegie Hall features three stages that host a variety of events throughout the year. Everyone from world-renowned classical musicians to modern popular acts. They all yearn for the chance to perform at Carnegie Hall. It’s also home to galas, movie screenings, and big-name comedians.

It’s one of those iconic venues that even people who don’t listen to music know the name of. It’s a must for basically any sort of visitor.

Bowery Ballroom is a music venue that gets its name from the NYC neighborhood it resides in. While there are many venues that have facilitated the shows for music legends, Bowery Ballroom is especially known for this feat. It was even named the #1 club in the United States by Rolling Stone Magazine.

So, if you spend time at Bowery Ballroom, you know you’re getting the best of the best.

👉Pro Tip: A nice thing about Bowery Ballroom is that it’s located in Lower Manhattan near a bunch of other cool areas such as Chinatown. Plus, there are plenty of nice restaurants and bars nearby. I’d recommend stopping by Mr. Purple, Ivan Ramen, or Katz Delicatessen after your show.

Originally, Forest Hills Stadium was slotted to be the spot for the U.S. Open tennis tournament when it first opened in the 1920s. It wasn’t until 40 years later that the stadium found its new purpose – as an enormous venue for concerts. After that, Forest Hills went on to be one of the most celebrated and successful venues in NYC.

Seriously, some of the biggest musicians in the world have performed at this venue. Barbra Streisand, Bob Dylan, Frank Sinatra. All the biggies. When you walk through the door you know you’re truly seeing a piece of music history.

Open since 1886, this is a multi-stage nightclub that’s hosted Sting, Prince, and Aerosmith

Webster Hall is one of the longest-running venues in New York City, and it’s still an awesome place to spend Saturday nights. Webster is a frequent stop for college kids around New York City because you really can’t go wrong with it.

There are five different rooms inside the venue and each tends to have its own vibe. In one room, you’ll hear the amped-up tunes of electronic musicians. Just down the hall from the electronic music, you could catch a set of jazz or indie rock.

What was once a small NYC venue is now a leader in the U.S. music industry

The Knitting Factory is a brand that has a few locations across the United States, but it all started in New York City. Today, the venue is tucked away in the trendy neighborhood of Williamsburg.

The Knitting Factory has lots of different experiences depending on what you’re into. For instance, there are pop-punk nights, stand-up comedy nights, and a number of shows from upcoming artists in genres of indie rock, pop, and experimental music.

Irving Plaza, operated by Live Nation, is a huge ballroom-style venue in the lower end of Manhattan. It opened in the 1970s and has been hosting incredible musicians ever since. In its (close to) 50 years in business, they’ve hosted artists like U2, Pearl Jam, and Eric Clapton.

There’s always some type of show going on at Irving Plaza. Plus, it’s close to many of the best places to stay in New York City.

The Mercury Lounge is one of the many subsidiaries of the Bowery Ballroom. This particular venue is known for getting new artists off the ground. The Mercury Lounge boasts that effortlessly cool feel that attracts a huge fanbase.

Look at all the incredible artists that had performed there since the early ‘90s when it opened. Lou Reed, Radiohead, The Strokes, Lady Gaga, The Killers. The list goes on. It’s clear to see why its earned itself a place as one of the top music venues in New York City.

Brooklyn Steel is a cute little venue nestled on the outskirts of Williamsburg. This is another one of those venues that I found myself frequenting a lot as a young person living in New York City. The tickets are always reasonably priced, and the acts are great. Plus, the venue space is close and personal without it being so cramped that there’s no room to dance.

Not only was Brooklyn Steel ranked as one of the top 10 best live music venues in America by Rolling Stone in 2018. But, it also landed itself on Travel Lemming’s annual list of the 150 best things to do in the USA.

Blue Note Jazz Club is one of those music venues that’s made such an impact on New York that it’s downright historical. Countless insanely famous jazz musicians have taken the stage at Blue Note to show off their stuff. It’s the type of venue that attracts people from all over the world to New York just to spend some time at the legendary Blue Note.

These days, Blue Note Jazz Club has many locations that are still pumping out jazz from world-changing artists. At the location in Manhattan, I’d recommend catching a jazz brunch show that happens periodically.

Barclays Center is another one of the big, stadium-style venues that host a variety of events. It’s mainly known for being the home turf of the Brooklyn Nets professional basketball team. However, you can also find a bunch of concerts at this venue.

I went to see Lil Wayne and Blink 182 perform together there in 2019. Yes, it’s a strange combination. Nonetheless, that’s the type of thing you can find at Barclays Center.

One of the country’s most architecturally-stunning venues for concerts

Out of all the music venues on this list, Kings Theater might be one of the most interesting architecture-wise. It’s actually a New York landmark. Not only are the performers at this theater a spectacle, but the theater itself is too.

The Apollo Theater is all the way in the tippity-top of the Upper West Side in the Harlem neighborhood. It features musicians from all different types of genres, such as jazz, swing, R&B, and hip hop. The Apollo Theater is more than just any ordinary music venue. It’s a cultural icon for both the local community and the music industry.

Anyone who has an interest in any of the genres mentioned here should take some time to visit the Apollo Theater. Even if you don’t catch a show, it’s a cool place to see at least once in your lifetime.

A quintessential club that showcased Bob Dylan, Jimi Hendrix, and Bruce Springsteen in their early days

Cafe Wha? is another one of those New York music venues that literally helped launch some of the biggest names in music that we all know today. The Cafe Wha? club is a huge part of rock and folk music history because they gave a lot of people a chance before they got famous.

You can still find super fun shows at Cafe Wha? You never know; you could end up seeing someone who goes on to become the next big thing. That’s the fun part about a night out at this NYC music venue.

Thanks for reading my guide to the best music venues in New York City! If it’s your first time in New York, be sure to read our New York state mini guide. It’ll give you a brief overview of everything you need to know.

Rock on and have fun at the music venues in NYC!

Sky Ariella is a professional writer from New York with an insatiable craving for exploring the world. After a post-college adventure around 6 Asian countries, she dove head-first into a writing career and travel lifestyle. Sky currently lives in Mexico City with her dog Bear.