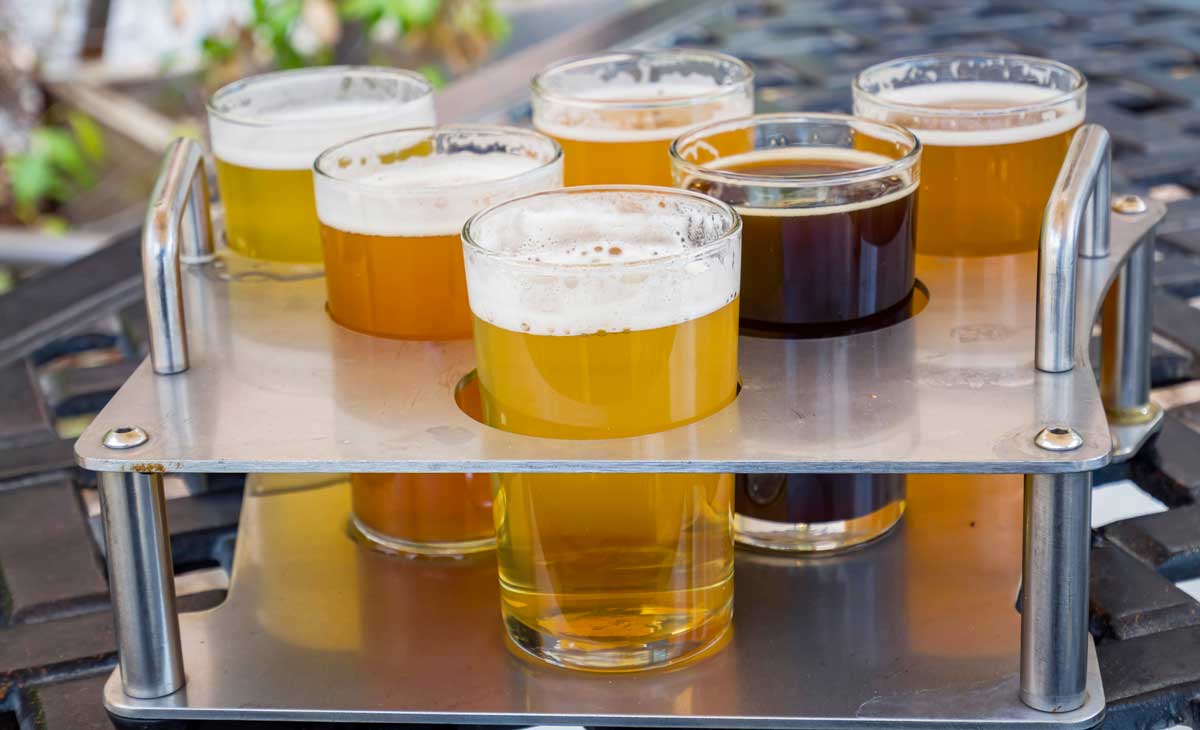 I’m a Las Vegas local and in this guide, I share the absolute best Las Vegas breweries.

Though there are more than fifty breweries in Las Vegas, I’ve narrowed it down to the top 15, celebrated for their award-winning brews and lively atmospheres. From seasonal pours to refreshing beer slushies, you are bound to find a craft beer to your liking.

Named after the first two atomic bombs at the Nevada test site, Able Baker Brewing is a unique brewery in the Las Vegas Arts District. There is both outdoor and indoor seating with wooden tables and benches, giving it a very industrial feel.

If you get hungry, you can place a food order to your table from the Arts District Kitchen. One of their most popular beers is the Atomic Duck, which took its name from a legend that a duck was the only animal to survive at the Nevada test site.

📚 Related Reading: Check out my article on the best neighborhoods in Las Vegas to read more about the Arts District!

CraftHaus Brewery has two locations, one in the Arts District and one in Henderson. There is a very modern and minimal ambiance featuring local artwork on the walls.

They have a rotating beer menu, and if you want to try something out of your comfort zone, they even have seasonal beer slushies. The pretzel and cheese bites are the perfect bar food and pair very well with their beer selection.

If you love bitter beers, Hop Nuts Brewing has you covered

Hop Nuts Brewing also has two locations with one in Tivoli Village and the other in the Arts District. They have a daily happy hour from 4-7 pm, allowing you to get a pint of select beer for only $4.

The Green Mamba is one of the most bitter beers that they serve, while the Golden Knight is a refreshing local beer that pays homage to our hockey team. Although they do not serve food, you are more than welcome to bring in your own from nearby Las Vegas restaurants when visiting.

HUDL Brewing is another great place to check out while brewery hopping in the Las Vegas Arts District. The concept behind this brewery was that love for beer can bring people together, and you can feel their passion in the air. The inside of the brewery is very minimal and simple, but it is the perfect place to bond over great drinks.

The Vanilla Oak Cream Ale is a crowd favorite, and many people prefer it on nitro. They are partners with Soulbelly BBQ, providing a delicious barbeque menu along with their craft beers.

Banger Brewing is a fun, upbeat brewery on Fremont Street. They have an outdoor and indoor seating area, and you can even bring your dogs on the patio. Their happy hour is from 1-3 pm, and 10-midnight, where you will get $2 off each beer.

Food is not served, but you can bring your own food inside the bar. Play fun games like Jenga while sipping their trendy El Heffe Jalapeno beer.

In the Las Vegas Arts District, you will find Nevada Brew Works which provides a great variety of local beers and food options. For those who aren’t big beer drinkers, they also offer mixed drinks and bourbon.

They have a total of 12 beers on tap, with the Blood Orange Hefe being one of their most popular. Nevada Brew Works also won the vote for the best microbrewery in Las Vegas 2021.

Enjoy a cold beverage outside, try your luck at gambling, and watch your favorite sports

Chicago Brewing Company is a Las Vegas microbrewery where you can go just to hang out. They have two locations, one in Summerlin and one on Fremont Street. They have a cigar bar, an outdoor beer garden, and a non-smoking taproom, so you can drink in the atmosphere of your choice.

Six beers are always on tap and three others usually rotate seasonally. The Chicago dog, deep-dish pizza, and the Old Town ale are some of the most popular menu items.

Neon Desert Brewery has a very welcoming atmosphere with cool art on the walls and big tables to gather around with friends. The 11 Circles of Helles is a unique Chile beer, and you can choose your spice level ranging from one to eleven.

Neon Desert partners with Letty’s to bring incredible Mexican food right to your table. They also have different food trucks nearby from Thursday to Saturday.

Lovelady Brewing Company has two Henderson locations, with one being in the Water Street District. This brewery is family-friendly, and you can even bring your dogs to their outdoor patio.

If you like trivia, you can reserve seats for their weekly Wednesday trivia nights. You may also want to play a game of shuffleboard or connect four while you are there. The most popular beers they serve are the Love Juice IPA and the 9th Island Pineapple Sour.

Tenaya Creek Brewery lies just a couple minutes off the Las Vegas Strip, and it is constantly buzzing with different activities. You can partake in a game of pool and enjoy live music, while also sipping a tasty brew. There are also trivia nights on Wednesdays, and sometimes they have fun features like Mario Mondays.

Tenaya Creek offers a wide beer selection, including some from other breweries. The Hauling Oats oatmeal stout is very popular, and many people choose to order it on nitro. Every night, a different food truck is set up in the parking lot, and you can preview the lineup on their website.

Visit Ellis Island for the full Las Vegas experience: a brewery, hotel, and casino all in one

Ellis Island is a Las Vegas hotel with an award-winning brewery inside. They serve their handcrafted beers at The Front Yard and the Village Pub. The Front Yard is a beer garden, restaurant, and atrium, and is well worth visiting.

Their beers will only set you back around $4 to $6, which is a Las Vegas steal! Along with their affordable and delicious craft beer, they also have an incredible root beer available at the brewery.

Mojave Brewing Company is a local brewery in the Water Street District of Henderson. They have fun flavors of beer like their Cinnamon Toast Crunch Ale and Shotgun Wedding.

One of the coolest things about this place is that you can bring your dogs inside and they have water bowls and treats available for them. It is a very laid-back and comforting atmosphere, perfect to enjoy their local brews and play a game of darts.

Check out this 24-hour brewery with exciting weekly events

Big Dog’s Brewing Company is an award-winning Las Vegas brewery, which you will find in North Las Vegas. Locals and visitors alike love this brewery because of its hometown feeling.

Big Dog’s Draft House features a tasty entree each night, and one of the best craft beers they serve is the Black Lab Stout. They have a “hoppy” hour every weekday from 3 – 6 pm, where you get half off all beers and $2 off appetizers. On their website, you will find their list of weekly events which include karaoke, live music, and trivia nights.

Astronomy Aleworks is in the Henderson Booze District and it takes inspiration from all things sci-fi. The interior is full of cool sci-fi murals and posters. There are often food trucks out in the parking lot, but they are not on any specific schedule.

They have Heavy Metal Tuesdays and Trivia Wednesdays, so be sure to swing by and rock out. The Helios Hef is an amazing beer, and they also have 11 other beers on tap so you have many different options to choose from.

Boulder Dam Brewing is a brewpub in Henderson that has won several awards. This brewery is very close to the Hoover Dam, and old tools and machinery from its construction are seen throughout the beer garden. They have live music every Friday and Saturday night, which occurs outdoors during summer and indoors during the colder months. There is also free pub trivia every Thursday.

When visiting, try some of their excellent food items, like their wings. The Rattlesnake Bite is a tasty drink that is half craft beer and half hard cider, also worth ordering.

👉 Don’t Miss: The Hoover Dam is one of the best day trips from Las Vegas.

FAQs about Breweries in Las Vegas

What is the most popular beer in Nevada?

The most popular beer in Nevada is the Coconut Pie Face Imperial Stout from Revision Brewing Company.

How many breweries are in Nevada?

There are over 50 craft breweries in Nevada. I’ve outlined the 15 best in this guide — some are famous award-winners and others are locals’ favorites.

Thanks for reading! Enjoy visiting these breweries in Las Vegas, and be sure to check out my guide on the best things to do in Las Vegas next!

Isabelle Pavese is a Las Vegas-based writer who loves to travel and explore new places. She tries to take at least two trips a year to places she has never been before. Some of her favorite cities in the world include Rome and San Francisco. Isabelle loves all things food-related and is on a mission to find the best restaurants in Las Vegas!