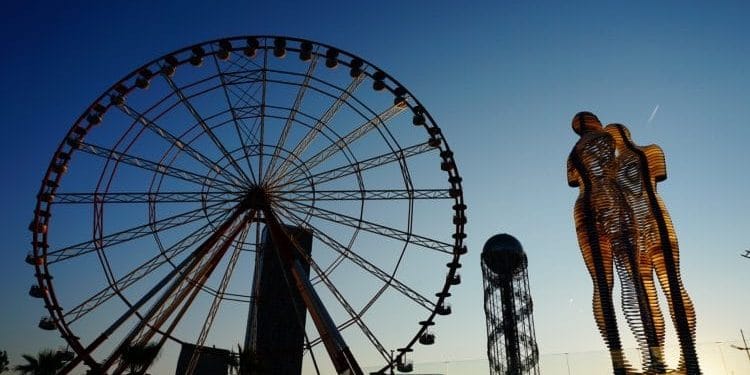 Imagine for a second that you mixed Singapore with Atlantic City, shrunk it down ten sizes, added a dash of southern hospitality and a hint of Soviet flavor, then plopped it all down on a pebble beach on the Black Sea. Welcome, my friend, to Batumi, Georgia.

The first thing I noticed about Batumi is that – while it’s one of the top places to visit in Georgia – it doesn’t really fit in with the rest of the country — and especially its older sister Tbilisi. Georgia is one of the most authentic, timeless, down-to-earth places I’ve ever visited. Batumi, by contrast, is fashionable, modern, and self-confident. Or at least it tries to be. Peer a little bit behind the facade and you’ll see that, for all its attempts to rebel from the Georgian family, Batumi’s blood still runs thick with the same hospitality and kindness that makes Georgia such a special country.

After an easy five hour ride on the super-modern German-made train from Tbilisi, I arrived at my Batumi apartment to be greeted by my hosts, a gregarious couple with an enormous family comprised of a seemingly endless lineup of children and elders. Before I can even set my bags down they greet me with a re-purposed soda bottle filled with home-made wine the husband makes in their basement.

Red wine has always given me a terrible allergic reaction — or so I thought. But just days before, on a tour through the wine-making region of Kakheti, I managed to down several glasses of the stuff without the slightest problem. Several Georgians have confidently told me that this is because what I am really allergic to is preservatives used in wines from the West — and that I get along fine with Georgian wine because it is unadulterated.

Maybe. Or maybe the whole allergy thing was just imagined? I guess I’ll find out when I get into Europe in a few weeks.

Anyway, I manage to escape my host family’s generosity in time to take a sunset walk around Batumi’s promenade. The city itself is bizarrely situated on a elbow of pebbles jutting out from the otherwise hilly landscape. Batumi is, first and foremost, a port city. Georgia’s proximity to oil producing regions in Central Asia means that Batumi offers an ideal launching pad for shipping fuel to the West without having to go through the conflict-ridden Middle East. And, indeed, just off the city center you’ll still find longshoremen loading and unloading giant containers onto waiting rail lines.

Next to the port is a small sun-kissed old town, where cobbled streets are lined with vegetable stalls propped against faded-pastel walls of the town’s 19th-century era buildings.

Nothing so out of character for Georgia so far right?

True. But take a few steps north, look up, and you’ll feel like you accidentally took a wrong turn and landed in Singapore’s Boat Quay.

Batumi’s skyline, consisting of a handful of over-sized steel skyscrapers soaring into the sky, immediately grabs you. The highlight of the futuristic structures is the Alphabet Tower — a 130 meter high structure that looks like something out of an alien movie. The name derives from the Georgian alphabet letters that adorn a DNA-helix shaped frame supporting a massive metallic orb.

The Alphabet Tower is flanked by several other futuristic structures. There were even plans to add an enormous Trump Tower to Batumi’s skyline, but the project was cancelled shortly before President Donald Trump was sworn in.

But if Batumi is Singapore or Dubai when set against the sky, at street level it feels more like the Jersey shore. An incredibly long concrete boardwalk pins a pebble beach against the cold but blue waters of the imposing Black Sea. In a month, those pebbles will be covered by umbrellas and large Russian bellies sunning themselves between rounds of vodka, ice cream, and kachapuri. The wide bike lanes will be filled with cyclists, roller bladers, and children pulling their parents towards a giant Ferris wheel or one of the many inviting carnival rides at the pier.

But it’s early June and the season is just starting. I’m still able to stroll down the pedestrian boulevard with my precious personal space unscathed.

As sunset approaches, I amble down to the new symbol of Batumi – the moving statute of Nino and Ali. Inspired by a tragic story of forbidden love between a Muslim boy and a Georgian princess, the metallic statutes briefly pass through each other — without ever actually touching — every ten minutes.

As the sun slips behind the Black Sea, the hot summer air gives way to a biting sea breeze, forcing me back home in search of warmer clothing.

Stepping into my host family’s courtyard, I’m immediately summoned over and, before I can even grab my jacket, ordered to take a seat and partake in rounds of cake, cheese, and wine.

One thing I quickly learned in Georgia is that anyone older than 40 is unlikely to be able to speak any English, though they’ll know Russian fluently. But Russian went out of style because of political strife ove the last two decades, so the younger generation is most likely to speak English as its second language. What this means is that I sit there communicating to the elderly gentlemen gathered around me by enlisting the younger folks to translate on my behalf.

After a long and winding conversation about sports, politics, and religion, an unmarked bottle is suddenly brought out from the back and poured into a large shot glass in front of me.

This spirit isn’t just anything — it’s Chacha, a brandy of sorts made from the bits of grapes left over after producing wine. Chacha, especially the homemade sort that I was be served, packs quite a punch. My host proudly tells me that he’s managed to get the alcohol content up to 85%.

I throw the shot back and immediately feel like I just consumed a gallon of acid. My throat burns as the men around me loudly laugh while shouting what I can only assume in Georgian means “weak Americans can’t handle their booze.”

I firmly and politely pass on a second shot and, when my head stops spinning, pull myself upstairs and into a cold shower. I’m not sure how I’ll survive three more days at this place…