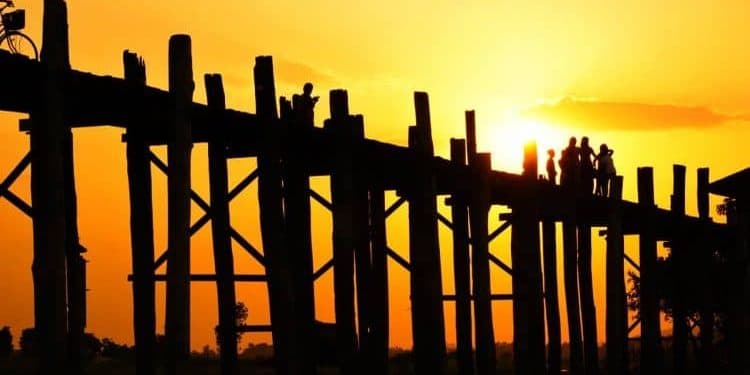 Myanmar (Burma) is one of my all-time favorite travel destinations.

Until recently it was mostly closed off to the outside world, but with political changes Myanmar is now an emerging backpacking destination. It is just as gorgeous as its neighbors in Southeast Asia, but far less explored (and exploited) by tourists than other popular travel spots like Thailand.

It also happens to be one of the most photogenic countries I’ve ever visited. The country explodes with color, culture, nature, and history. This all makes for some incredible Myanmar photos.

So here are 35 pictures of Myanmar to inspire you to visit Burma:

Myanmar is most famous for the thousands of stunning temples at Bagan, which each morning bask in the glow of the sunrise while hot air balloons hover overhead:

Visitors to Bagan can rent small electronic bikes or bicycles to explore the many temples that dot the archaeological zone. There are thousands of temples and, though visitors are starting to head to Bagan, it is still possible to find plenty of entirely empty one to have to yourself. For more information on the temples of Bagan, check out this post at The Planet D.

One of my favorite memories from Myanmar was exploring the massive but shallow Inle Lake. This giant lake is surrounded by villages, some of them literally built on stilts over the water.
And while Bagan is famous for its sunrises, the sunsets at Inle Lake are equally impressive. Burmese fishermen pose with their nets for photographs, making for some incredible Myanmar pictures.
The fishermen on Inle Lake row their boats with one leg so that they can have their hands free to work their nets. Some of them also pose for photographs at sunset. The results pictures are stunning, but bear in mind that they will expect a tip!
Exploring Inle with a camera was one of my favorite memories from South East Asia. There are so many great pictures to be had — and so many way to get around and away from anyone else (it’s a big lake after all). You can take a bicycle for a ride through the villages and, if you get tired, just hire a boatman to take you across the lake.
Inle Lake is dotted with floating gardens where to locals grow all sorts of crops directly over the water. There is also a town that is famous for making tofu and a popular market where you can buy food directly from the farmers.
Though Inle Lake is still a secondary attraction to Bagan, I actually thought my time there was the highlight of my visit to Myanmar. I loved the relaxed vibes, the incredible culture, the friendly locals, the nature, and of course the gorgeous photo opportunities everywhere.

While many people associate Mandalay with Rudyard Kipling’s iconic poem, the city’s vibe is decidedly different than what you might guess from the poem (indeed, Kipling never actually went to Mandalay). Most of Mandalay is a bustling, crowded city with little of the romance conveyed by Kipling. But you can still find some amazing culture in Mandalay.

The U Bein teak bridge in Mandalay is over a kilometer long. In places the bridge is so rickety that it feels like it might just snap at any moment! But, despite the increasing number of tourists, it’s still a great place to interact with locals.

You’ll find monks hanging out and vendors selling ice cream on the bridge, while underneath fishermen and duck shepherds — you heard that right, duck shepherds! — tend to their trades.

Mandalay also boasts some stunning temples, as well as a monastery high on a hill offering incredible opportunities to take stunning photos of the city.
While Mandalay is often skipped by visitors, its culture, temples, and general vibe is unique and well worth a stop in my opinion.

Myanmar still feels a bit like a country a trapped in time. But with the recent political changes, it is starting to modernize quickly. Nowhere is that more apparent than Yangon, the country’s capital and the main entry point for most visitors.
The highlight of any visit to Yangon is the Shwedagon Pagoda. Constructed over a thousand years ago, the pagoda stands almost 100 meters tall (for more on visiting it check out this blog).
And despite the development in Yangon, it’s still easy to get away from it all. My favorite activity there was taking a ride on the Circle Train, an incredibly slow train that, as the name suggests, circles the city. The best part about the ride are the amazing interactions with curious locals, who were very eager to meet me and my friends.
Along the way, the train fills with farmers ferrying livestock and crops of every sort and vendors selling all kinds of foods — I even watched a man cook corn in the train!

Many things about Myanmar are enrapturing — its stunning temples, its gorgeous nature, its unique cuisine. But, more than anything, what captured my heart was the warmth of the country’s people.
Perhaps more than anywhere else I’ve visited, the people were extremely eager to interact with me (even though most can’t speak English).
Foreign visitors are still new to Myanmar (especially outside of Bagan), and so at times I felt a bit like a celebrity and was frequently asked to pose for photos. I think they were especially interested in someone as tall as me — I looked a bit like a giant standing next to many of the Burmese people I met! In fact, one of my top experiences while traveling the world took place during one of these photo shoots.

Want to go to Burma to take your own Myanmar photos?

If you are interested in traveling to Myanmar yourself, check out my brief guide to backpacking Myanmar. I strongly suggest going sooner rather than later, as the influx of tourists is likely to change the character of the country eventually. I have a hard thinking of a place that is as poised to become a major tourist destination over the next decade.

[Edit: In light of the ongoing humanitarian crisis in Rakhine State, some travelers may feel ethical issues with travel to Myanmar. I encourage you to consider these issues, which are discussed in further detail in my post: Should Travelers Boycott Myanmar?]

And for more cool Myanmar photos, stories, and guides from other travelers, see here, here, and here.
What do you think? Have you been to Myanmar? Is it on your bucket list? Let me know in the comments!